PROTESTS BREAK OUT IN VIENNA OVER VACCINE MANDATE 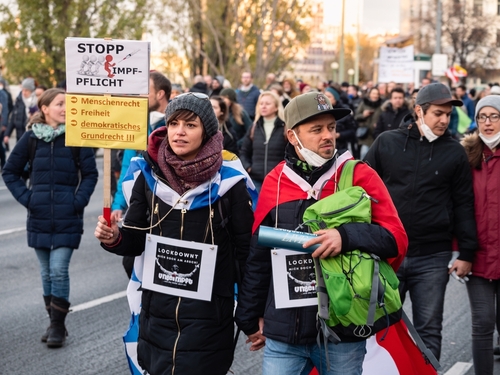 Protesters chanting “the government must go” took to the streets in Vienna on Saturday demanding that leaders rescind their plan to enforce mandatory COVID-19 vaccinations in the country.

A day after the protest, the government announced that it would increase the age of those impacted by the vaccine mandate from 14 to 18 years old, The Associated Press reported.

The Trends Journal reported on the proposal when it was announced in November, in an article titled, “AUSTRIA: ‘NO VAX, NO FREEDOM.’”

We reported that under the mandate, citizens who cannot produce a COVID-19 vaccine passport will be fined up to €3,600 ($4000). The country’s parliament plans to vote on the plan on Thursday and could be adopted into law by as soon as February.

The AP reported that there will be some exceptions, including pregnant women and those who cannot be vaccinated due to medical reasons. About 73.5 percent of the population is fully vaccinated.

“Without obligatory vaccination, we will always lag behind,” Wolfgang Mueckstein, Austria’s health minister, said, according to the AP. He said “all experts believe that we will need high overall immunity in the population next fall as well.”

Karl Nehammer, the chancellor, framed the issue for citizens on Sunday that this is not a fight between the vaccinated and the unvaccinated, but said “vaccination is the best guarantee for us to live together in freedom.”

Politico reported that residents in the country could be fined up to four times a year for being in violation of the mandate.

TREND FORECAST: As we have detailed to great extent in this and previous Trends Journals, getting the vax does not eliminate getting the virus.

In fact, again, as noted in this and previous Trends Journals, the Operation Warp Speed jab which was sold to the public as having an 96 percent efficacy rate, was downgraded to 39 percent by the Israeli Health Ministry.

And now, the same ministers of Israeli health reported that the 4th dose booster shot is ‘not good enough’ against the Omicron variant. Therefore, we forecast new versions of the gene therapy inoculation will be coming to market and yearly shots will be required/enforced by governments and institutions.