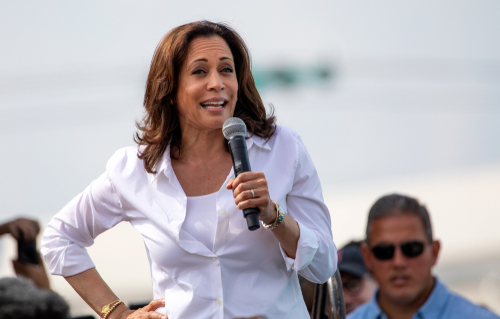 Vice President Kamala Harris, one of the White House's most adamant proponents of COVID-19 vaccine mandates, continues her crusade to defend women's rights when it comes to abortion and recently told abortion advocates that these rights are about “our future as a nation.”

They’re “about whether we live in a country where the government can interfere in personal decisions. This is about our future,” she said.

Harris has been talking on the topic since a draft Supreme Court opinion was leaked to the media that overturned the landmark abortion ruling.

The leak was seen as an affront to the court and sparked massive pro-choice protests at the homes of various Supreme Court justices, including Samuel Alito, who wrote the draft opinion. (See “VP HARRIS HYPOCRISY: ABORTION RIGHTS GOOD, VAX RIGHTS BAD.”)

In a video conference meeting with abortionists and abortion advocates, Harris called out Oklahoma’s governor, Kevin Sitt, who vowed to pass a bill that bans abortions after “fertilization.” She said these kinds of laws are simply an effort to “punish and control women.”

TRENDPOST: While complaining about living “in a country where the government can interfere in personal decisions, Harris was a chief supporter for all Americans to get the COVID Jab.

She also pushed for President Joe Biden's vaccine mandate that was directed at those in the military and workers for federal contractors. The Biden administration also had a mandate directed at private employers that had 100 or more employees, which the U.S. Supreme Court overthrew.

TRENDPOST: Harris no doubt is thrilled to finally have a topic that resonates with Americans who are growing increasingly frustrated with the Biden administration. A newly released CBS News/YouGov poll found that nearly eight in 10 voters say conditions in the U.S. are going “somewhat” or “very” badly and 56 percent disapprove of how Biden is handling his presidential duties.

These numbers do not bode well for Harris who theoretically is the heir in the Democratic Party, so she is latching on to a topic that resonates with single-issue voters and core constituencies. And there is no better single issue than abortion. Gerald Celente has long said that, “When all else fails they take you to war.” In electoral politics for Democrats going into the mid-term elections, that saying could be edited to, “When all else fails bring up abortion rights.”

Playing a fake role in the 2020 race for the White House, Harris, in a debate with Trump Vice President Mike Pence, said she wouldn't be quick to get the Operation Warp Speed jab that was quickly developed during the Trump administration.

But once the election was over and she became Vice President, she quickly changed her tune and became one of America’s pro-vax champions.