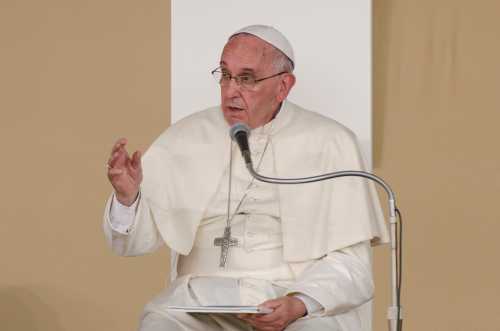 Pope Francis last week appeared to acknowledge the role that an expanding NATO played prior to the Russian invasion of Ukraine, and referred to the alliance as a “barking” dog at Moscow’s doorstep.

“NATO barking at Russia’s gate may have compelled [Russian President Vladimir] Putin to unleash the invasion of Ukraine. I have no way of telling whether his rage has been provoked, but I suspect it was, maybe, facilitated by the West’s attitude,” Francis said in an interview with the Italian paper Corriere Della Sera.

Francis also expressed interest in visiting Russian President Vladimir Putin in Moscow, but he told reporters that he has not heard back from the Kremlin.

“I must go to Moscow, I want to meet Putin first of all," he said. "But in the end I am just a priest, what can I possibly achieve? I’ll do what I can,” he said.

The pope called off a June meeting with head of the Russian Orthodox Church, Patriarch Kirill, who Politico said supported the war and is a major Putin backer. Francis said he thought the meeting would look “ambiguous”—but in a 16 March phone call said he warned Kirill not to “turn himself into Putin’s altar boy.”

"I spoke to him for 40 minutes via Zoom," Francis said. "The first 20 minutes he read to me, with a card in hand, all the justifications for war. I listened and told him: I don't understand anything about this. Brother, we are not clerics of state, we cannot use the language of politics but that of Jesus," the pope said.

"It is regrettable that a month and a half after the conversation with Patriarch Kirill, Pope Francis has chosen the wrong tone for conveying the contents of the conversation," said the Department of External Relations of the Russian Patriarchate, according to CNN. "Such declarations do not contribute to establishing a constructive dialogue between the Roman Catholic Church and the Russian Orthodox Church which is particularly necessary at this time," the statement reads.

Francis has spoken out against Russia's decision to invade Ukraine and the subsequent weapons transfer into Kyiv from Western countries to keep the killings going. He said the weapon donations and the profiteering by arms dealers is a "scandal" that too few speak out about.

Peoples World reported that Francis said last month that he was concerned that WWIII was already being fought in "every corner of the world—Syria, Yemen, Iraq, Africa, one war after another."

TRENDPOST: The Wall Street Journal’s editorial board last week called out Pope Francis for hinting that NATO shared some of the blame for the Ukraine war when he accused the Alliance of “barking at Russia’s gate.”

The Journal also took issue with the pope for comments about hoping to meet with Putin at some point and not Ukraine’s President Volodymyr Zelensky.

The paper wrote: "The Pope said he has requested an audience with Mr. Putin but hasn’t heard back. Asked whether he’d visit Kyiv, he said he must go to Moscow first: “If Putin decided to leave the door open . . . ” This is a pattern. Recall that the Pope declined to meet with U.S. Secretary of State Mike Pompeo in 2020, at least partly because of America’s opposition to the Vatican’s egregious deal-making with the Chinese Communist Party."

This backlash is commonplace for anyone who does not genuflect at the Altar of St. Zelensky.

TRENDPOST: Why did Russia attack Ukraine?

In his Victory Parade speech in Moscow yesterday, Russian President Vladimir Putin said, “We saw how the military infrastructure was unfolding, how hundreds of foreign advisers had begun to work there, with the most modern weapons being regularly delivered from NATO countries. The danger was growing every day. Russia offered a pre-emptive rebuff to the aggression—this was a forced, timely move and the only correct decision, one taken by a strong and independent country."

He said, “Preparations had been underway for another punitive operation in the Donbass, an invasion of our historical lands, including Crimea," and that the U.S. and NATO ignored Moscow, refusing to listen to the Russian Federation.

TREND FORECAST: As we have noted in Trends Journal articles going back to 30 April 2014, following the United States orchestrated overthrow of the democratically elected president of Ukraine, Victor Yanukovych, there was NO NEED FOR NATO. And that the expansion of NATO would lead to conflict with Russia.

“NATO has gone on too long.  The North Atlantic Treaty Organization was established on April 4, 1949, as a defensive alliance whose purpose was to defend Western Europe in the event of a Soviet invasion. As NATO’s first secretary general put it, NATO was formed in order to keep the Russians out of Western Europe and the Americans in.

“Instead of disbanding NATO when the Soviet Union collapsed in 1991, Washington dramatically expanded NATO.  In violation of the Reagan-Gorbachev agreements, the Bill Clinton and George W. Bush regimes added constituent parts of the former Soviet empire to NATO—Hungary, Czech Republic, Poland, Estonia, Latvia, Lithuania, Slovenia, Slovakia, Bulgaria and Romania. France, taken out of NATO by General de Gaulle, rejoined in April 2009, 18 years after the collapse of the Soviet Union, along with Croatia and Albania. Currently, the Obama regime is working to incorporate into NATO two former Soviet Republics—Ukraine and Georgia.”