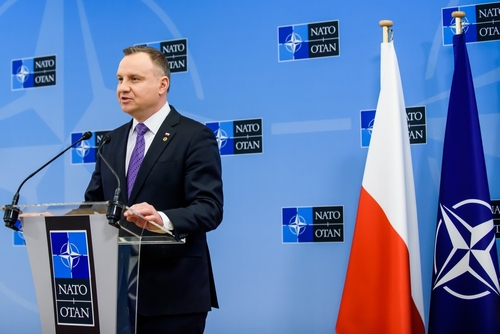 Polish President Andrzej Duda visited Ukraine on Sunday and became the first world leader to address the country's parliament in person and agreed with Ukrainian President Volodymyr Zelensky that all Russian troops should leave the country.

The Wall Street Journal reported that Duda broke with other western leaders who appeared willing to compromise on parts of the country that Russia has taken over to achieve a peaceful resolution.

“There are emerging voices within Europe demanding that Ukraine should acknowledge the demands of Russia,” Duda said. “I want to say clearly that only Ukraine has the right to decide about itself. Nothing should be decided about you, without you.”

TRENDPOST: Ukraine military would not be standing today if not for the historic amount of financial and military aid from Western countries that want to see Russia defeated.

Oleksander Kubrakov, Ukraine’s infrastructure minister, said in a statement obtained by Reuters that the neighboring countries are working on the creation of a joint venture railway company to increase the export potential of the Ukrainian economy.

Ukraine is considered the breadbasket of Europe, but since the invasion, its infrastructure has been essentially destroyed. Reuters reported that there are about 25 million tons of grain stuck in the country. Kyiv used to export these goods by ship but has now looked to train or small ports on the Danube River.

Zelensky said the venture would significantly “speed up border procedures” and “remove most of the corruption risks.” The countries are also working on setting up a joint border customs control.

“But it is also the beginning of our integration into the common customs base of the European Union,” he said. “That is truly a historical process.” (See “RUSSIA ENDS GAS EXPORTS TO POLAND, BULGARIA. GERMANY AND ITALY ARE NEXT.”)

Alexander Lukashenko, the Belarusian president, has accused Poland and NATO of trying to “dismember” Ukraine and take control of the western part of the country.

"What worries us is that they are ready, the Poles and NATO, to come out, to help take western Ukraine like it was before 1939," Lukashenko, according to Reuters.

Lukashenko made the comment during a televised meeting with Russian President Vladimir Putin. The report pointed out that Poland has become one of Ukraine’s top supporters, sending billions in weaponry and taking in more than three million refugees.

Duda said the border between Poland and Ukraine should “unite not divide.”

Ukrainian and Russian troops clashed in the eastern part of the country during Duda’s visit, which is seen as a possible turning point in the war. Zelensky said if his forces cannot fight off the Russians there, the entire country could crumble.

Zelensky praised his fighters on Saturday night and said “the fact that we are able to say this on the 87th day of a full-scale war against Russia is good news.”

Russia is accused of taking a "scorched-earth approach" in its efforts to capture Severodonetsk, the report said.

The city is located on the Donets River, which is considered a strategic position. U.K. officials told the BBC that the city is likely one of Russia’s “immediate tactical priorities.”

“They are wiping Severodonetsk from the face of the Earth,” Serhiy Haidai, the governor of Luhansk, said. He told Al Jazeera that there is one hospital in the city of 100,000 with three doctors and supplies for 10 days.

TREND FORECAST: As we have forecast, WWIII has begun. (See “BIDEN SAYS PUTIN MUST PAY A PRICE OVER UKRAINE INVASION.”)

Ukraine does not have the military to stand up to Russia and despite praise from western leaders about their toughness and sacrifice, the war will not end well for them.

We forecast that when the Ukraine government can no longer fight the war, it will be forced to succumb to Russia’s demands. Therefore, it would be best to negotiate for peace now so that they may receive possible concessions from Russia, and to end the death and destruction wrought by the military confrontations.