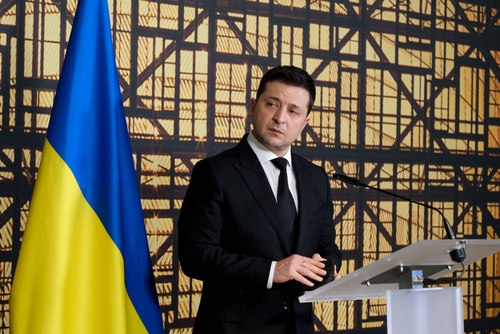 Ukrainian president Volodymyr Zelensky said Saturday that his country will ultimately prevail in its war against Russia despite losing territory to Russian forces and separatists in the eastern part of Ukraine.

“We are definitely going to prevail in this war that Russia has started,” he said. “It is on the battlefields and Ukraine that the future rules of this world are being decided.”

Oleksiy Arestovych, a Zelensky adviser, said his country needs more advanced rocket systems than the U.S. and U.K. promised if his forces stand a chance against Russia on its eastern flank.

The paper said Britain has been vague on how many M270 tracked rocket launchers it will give to Ukraine. The paper said “a handful.” The U.S. said it would donate four HIMARS, or truck-based high mobility artillery rocket systems (Himars). (See “ZELENSKY WON’T BUCKLE, LAMENTS BEING PRESSURED FOR PEACE.”)

Ukrainian officials say they are now fighting an artillery war for cities in the Donbas region like Severodonetsk, and the ultimate decider will be just how fast the West can deliver these weapons. The British Ministry of Defense said Ukrainian fighters have managed to hold on to the southern section of the city.

The Ukrainian military complained that when it fires one artillery round at Russian forces, Russian troops respond by firing 20 rounds in their direction. The Donbas region has been described as pivotal by Ukrainian officials because Russia could use the region to launch a new offensive against Kyiv.

“Russia’s invasion of Ukraine is what happens when oppressors trample the rules that protect us all,” he said at a security summit in Singapore. “It’s a preview of a possible world of chaos and turmoil that none of us would want to live in.”

Ukrainian forces now rely fully on Western support to keep fighting the war. One top Ukrainian intelligence official said his forces are just about out of ammunition.

The fight will take a new focus on either side’s ability to inflict damage from miles away. Russia is winning on that front. Reports indicate that Ukraine is firing up to 6,000 artillery rounds a day, but stockpiles are emptying and these forces are now using “155-caliber NATO standard shells.”

“Ukraine has one artillery piece to 10 to 15 Russian artillery pieces,” Vadim Skibitsky, the deputy head of Ukraine’s military intelligence, told The Guardian.

TRENDPOST: Skibitsky told The Guardian that the West only gave Kyiv about 10 percent of their heavy rocket launchers, which raises the question: Does Ukraine expect Washington to empty out its own stockpiles to drag the country through the conflict?

The U.K. Defense Ministry said Russia seems to be turning to more fatal weapons, including heavy 1960s-era anti-ship missiles carried by bombers. CNBC reported that these Kh-22 missiles were designed to destroy aircraft carriers with a nuclear warhead. But when used in ground attacks with conventional warheads, they “are highly inaccurate and therefore can cause severe collateral damage and casualties,” the ministry said.

The New York Times reported Wednesday that despite the record amount of financing and weapons, U.S. intelligence agencies know little about how the Ukrainian military is performing.

The paper, citing current and former U.S. officials, published a report that said these agencies have “less information than they would like about Ukraine’s operations and possess a far better picture of Russia’s military.”

Beth Sanner, a former senior intelligence official, told the paper: “How much do we really know about how Ukraine is doing?”

The Trends Journal has noted since the beginning of the conflict that it was nearly impossible to find the number of casualties suffered by Ukrainian troops in Google searches. But if you were interested in finding out Russia’s war dead, there were dozens of article links.

This has all been part of the propaganda war being conducted by Washington and media Presstitutes.

TREND FORECAST: Who will win the Ukraine War? We said Russia would since the onset while the U.S. and its allies said the opposite. See:

TREND FORECAST: Totally forgotten, but as we reported back in April 2021, the U.S. was sending warships to the Black Sea in what a Pentagon official, cited by CNN, said was a demonstration of support to the government of Ukraine in response to claims of increased Russian military presence in the country's eastern border.

They note that the Black Sea, however, is nowhere near the current conflict zone in the Donbas, further east of which the alleged Russian buildup is occurring.

Following that report White House Press Secretary Jen Psaki said, “The United States is increasingly concerned by recently escalating Russian aggressions in eastern Ukraine, including Russia’s movements on Ukraine’s border. Russia now has more troops on the border of Ukraine than any time since 2014. Five Ukrainian soldiers have been killed this week alone. These are all deeply concerning signs.”

And over a year ago we had forecast, “Should war break out in Ukraine, we forecast the Russians will not be defeated, and the Donbas region of Eastern Ukraine will move toward cession and maintain its open border arrangement with Russia.