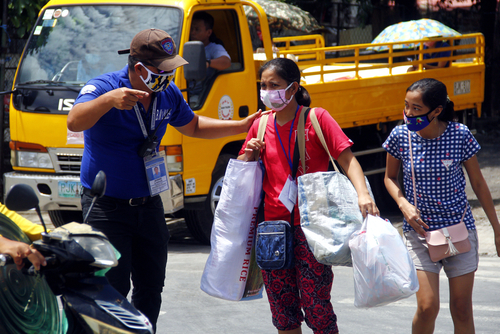 In a televised address last week Philippines President Rodrigo Duterte deputized community leaders to alert authorities if they spot someone who is unvaccinated outside and breaking stay-at-home orders.

“If he refuses, if he goes out his house and goes around the community, he can be restrained,” the president said, according to Reuters. “If he refuses, the captain is empowered now to arrest recalcitrant persons.” (SEE: “COVID-19 PASSES: EUROZONE’S NEW WORLD ORDER,” and “IS THE WORLD ADOPTING THE WAYS OF NAZI GERMANY.”)

Nearly half of the country’s population has been fully vaccinated. Those who are unvaccinated in the country cannot leave their homes except for essential trips. The new surge in cases has prompted airlines to cancel more than 100 flights.

“Because it’s a national emergency, it is my position that we can restrain” individuals who have not taken the jab, Duterte declared.

India’s capital of New Delhi has imposed new restrictions due to a surge in COVID-19 infections. The country of 1.38 billion recorded 1.6 million new cases on Monday and 277 deaths.

Prime Minister Narendra Modi urged citizens to remain vigilant and Arvind Kejriwal, the chief minister of Delhi, also ordered a curfew due to the number of new cases.

In Maharashtra, India’s richest state, the government ordered swimming pools and gyms to close. And as of yesterday, schools and colleges will be closed until 15 February. In the state of Gujarat, night curfew hours have been extended and all healthcare personnel are prohibited to go on leave.

Only fully vaccinated people will be allowed into private offices and workforce capacity will be limited to 50 percent.

Despite the surge, many Indians are beginning to ditch masks because they question their effectiveness, according to The New York Times.

“When we gave them masks, people just threw them away,” Siddesh Valvaikar, a volunteer, told the paper.

TREND FORECAST: In the Philippines, considering the extent of government rule, there will be little resistance against Duterte’s dictates.

As for India, as with other nations, states and cities, they make up COVID restriction mandates such as times for going back to school, curfew hours, office space capacity, social distancing, mask wearing, etc., without a scintilla of hard facts or scientific data.

With India’s economy bouncing back from a COVID War freefall, we forecast restrictions will be limited and lightly enforced.