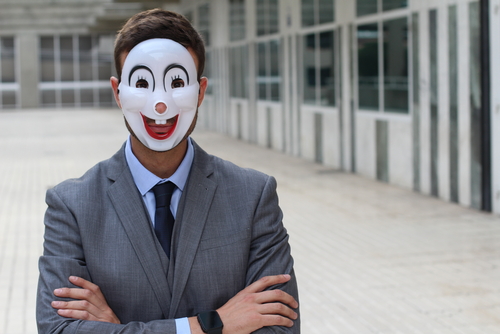 In psychology, gambling, and the world of con artists, it’s called a “tell.”

It could be a signature physical movement or tic, or sometimes just something said in an odd context, that reveals something the person in question doesn’t consciously realize.

Pfizer CEO Albert Bourla may have just given a huge “tell” about how he really thinks he should be considered by the world: as a criminally dangerous drug pusher.

How did Bourla’s “tell” manifest itself?

It happened while Bourla was adamantly pointing the finger at people who have rejected COVID gene level mRNA treatments deceptively called vaccines.

In an interview this past week with the CBC, Bourla made an incendiary, though unsurprising charge that people disseminating information critical of COVID vaccines are “criminals” who “literally cost lives.”

But in explaining his charge, Bourla this time oddly brought up a specific instance of a man who has blamed a COVID vaccination for the death of his wife, and warned others not to get vaxxed.

“There’s an article—‘a picture of my wife’—‘I forced her to get the vaccine and then because of the vaccine she died’,” Bourla brought up the story in the interview. “All of that lies, of course,” he dismissed the claim.

An interviewer then asked the Pfizer CEO: “And they did it, why?”

“Because they wanted to convince people that were on the fence to do the vaccine—‘don’t do it, look his wife died’—but forget that, that’s nothing compared to how many people who didn’t do the vaccine and died because of that.”

The exchange was bizarre, with Bourla claiming one moment the man was lying about a painful personal experience, and then claiming that it might well have been a vaccine-related death, but that even if so, it was “nothing” compared to the lives saved by Pfizer’s treatment.

Bourla’s strange justification and “non-admission” admission might easily be seen as a “tell” of Bourla’s sense that he and his company are in fact the ones criminally responsible for thousands of vaccine deaths and injuries.

His extreme characterization of an actual victim of a vaccine adverse event as a criminal can be taken as a “tell” that Bourla knows full well that he and his company are the real criminals, and he is highly uncomfortable when confronted with stories like the man whose wife died due to Bourla’s vaccine.

According to the CDC’s own Vaccine Adverse Event Reporting system database (VAERS), the number of COVID vaccine deaths and serious adverse events and injuries surpasses all previous vaccines in the history of vaccinations combined.

Previously, if any vaccine released to the public resulted in even a fraction of the deaths and serious injuries that the COVID vaccines have caused, those vaccines were pulled, as was the case in the 1970’s with a swine flu vaccine. In that case, the swine flu vaccine program was discontinued after barely a hundred reported deaths.

So what are the current VAERS adverse event numbers? According to the CDC:

“These government statistics show there is no greater danger to the lives of Americans today than our own government which is sitting on data that show the following increases of reports in VAERS following COVID-19 vaccines:

Perhaps Bourla should put the Centers For Disease Control and Prevention on his list of criminals for dealing in vaccine “misinformation.”

The Trends Journal has been a leader in reporting on the dangerous adverse events of COVID vaccines. (See our many Vaccine “Fast Facts” articles dating back to early February 2021, when data from the COVID vaccine rollouts began coming into the VAERS database.)

Little wonder that Pfizer and the CDC tried to block information concerning COVID vaccine “Warp Speed” development and trials from being released to the public for 75 years.

Many would call that cover-up attempt criminal.

A Federal judge nixed the idea.  And data that has now come out about what Pfizer, Bourla and the FDA knew about vaccines before their authorization and tried to hide, is damning.

“FDA approved the Pfizer vaccine even though 15,000 people had serious disorders of the nervous system after taking it. More than 20,000 persons had various significant problems (defined as ‘general disorders’) after being vaccinated and reported them to the FDA, yet the vaccine was authorized anyhow.”

While warp speed vaccinations were creating warp speed adverse reactions, Bourla and Pfizer were pushing for vaccines to extend to every demographic group, including healthy people under 50, and youth 18 and younger who were at practically zero statistical risk of any serious illness from the COVID virus. (See “DRUG DEALERS: GET KIDS VACCINATED” and “NO GOOD REASON FOR VAXXING KIDS” for examples of TJ reporting on this issue.)

In addition to trying to suppress what they knew about vaccine adverse events, and about the negligible risk of COVID for virtually most people not aged or infirm, Bourla and pharmaceutical companies went even further.

In concert with the federal government, Pharmaceuticals paid media and “news” organizations millions to positively promote COVID vaccines in their stories and communications, without any of the entities disclosing the payments to the American public. (See “HUNDREDS OF NEWS ORGS TOOK GOV’T CASH TO SHILL COVID PROPAGANDA,” 8 Mar 2022.)

In other words, Bourla actively funded deceptive propaganda pushing vaccines which were not needed for vast portions of the populations, which prevented benefits of natural immunity, and which were riddled with serious side effects known to the manufacturers, that would’ve torpedoed any previous medical treatment or vaccines.

Bourla’s comments trying to lay blame on vaccine victims and truth seekers is abhorrent enough, and his recent interview can be read as a twisted psychological confession of his outsized role in the COVID vaccine travesty.

But the fact that Bourla personally, and Pfizer and other pharmaceuticals more generally, have been anything but noble disinterested “saviors” of humankind, is another major facet of the story.

The fact is, Bourla and his company could have agreed to produce the vaccines according to a non-profit model, as a CNN article on the subject makes clear.

In a time of perceived world calamity, Pfizer could have positioned itself as a trusted actor, with no personal profit motive concerning desperately sought COVID vaccine treatments.

Instead, CNN reported in May 2021 that Pfizer and Bourla were making billions commercially profiting off COVID vaccines:

“Pfizer expects its sales of the vaccine to total about $26 billion by the end of this year, with a profit margin approaching 30%.

“Bourla has defended the decision to profit from the vaccine, saying his company assumed all the risk to develop it and invested as much as $2 billion in research and development.”

Bourla’s statement concerning the financial risks his company took—well, that’s a lie, too.

According to the National Institutes of Health (NIH), American taxpayers heavily funded research that was instrumental in development of the COVID vaccines.

An NIH article specifically debunks Bourla’s claim about Pfizer assuming all the financial risk in its vaccine development. While Pfizer was one pharmaceutical that didn’t receive significant American taxpayer vaccine research funding, they did score nearly $500 million from German taxpayers:

“Pfizer’s often‐repeated statement that it invested ~ $2 billion and did not receive any government research funding to develop its vaccine paints an incomplete picture, because its partner BioNTech received $445 million in funding from the German government to assist with COVID‐19 vaccine development. BioNTech is now licensing the NIH’s patented pre‐fusion spike protein technology.”

In addition to that, by July 2020, Pfizer had already reached a 2 billion dollar deal on vaccines with the federal government, while the Pfizer vaccine was still in development, according to CNN.

The criminality and greed of Bourla, Pfizer, and other pharmaceutical CEOs and companies is at this point well documented, so it’s little wonder that he is making new rounds trying to spin reality yet again, shift blame, and suppress unflattering information.

But make no mistake, Bourla and his cohorts were never disinterested and benign actors in COVID saga. Not for one second.

As Anne Marriott, of Oxfam Health, commented in a reaction to the billions in COVID vaccine profits being reaped by pharmaceutical drug pushers:

“These billionaires are the human face of the huge profits many pharmaceutical corporations are making from the monopoly they hold on these vaccines. These vaccines were funded by public money and should be first and foremost a global public good, not a private profit opportunity.”