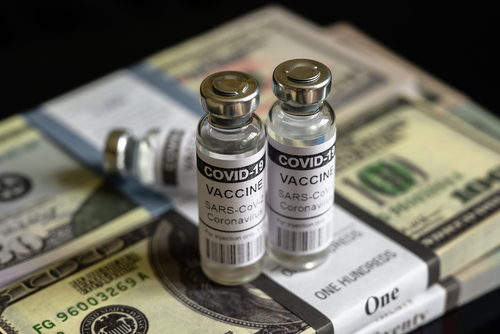 For little people with little minds that can’t count past 10 and believe all the crap that the mainstream media, insane politicians, clown comedians and suck-up actors shove down their throats... it’s Vax Time!

This past weekend, a press release from California Governor Gavin Newsome announced that he joined the club of the fully vaxxed and double-boosted that got the coronavirus.

As we have reported extensively—across their freak-show spectrum—scores of the biggest champions who promote the forcing of everyone to get the Operation Warp Speed inoculation... have gotten fully jabbed and boosted and still got the virus.

And to illustrate the arrogance of their stupidity, Newsom’s release told the little people of the United States—the plantation workers of Slavelandia—that despite the Governor being vaxxed and double boosted and still getting the virus, they should get the shots too because “Vaccinations and boosters remain the biggest way to protect yourself from COVID-19.”

Since it is also proven that the vaxxed also spread the virus, they left out the line that the un-vaxxed are a threat to society.

This of course, proves more of what this week’s Trends Journal cover illustrates. Happy America: Ignorance is bliss.

At the “elite” Davos meeting last week, Albert Bourla, the CEO of Pfizer, told the gang that the world faces a new threat from COVID-19 because so many people are becoming complacent when it comes to the virus.

Bourla, has been a cheerleader for mRNA vaccines to fight the virus and has admitted in the past that the public does not have the same appetite for a new jab every four months. (See “PFIZER DRUG LORD PUSHING YEARLY COVID JABS. CALLS THOSE WHO WON’T SWALLOW BULLSHIT ‘CRIMINALS.’”)

Last February, he said the virus will never be eradicated from society and will always kill some percentage of the public each year. He repeated that position during the meeting at the World Economic Forum (WEF).

“I feel when I discuss [COVID] with my friends people are ready to compromise and lower the bar: maybe we can accept a few more old people dying, [rather] then have to work with a mask,” he said, according to the Financial Times. “What worries me is their complacency.”

Reports are emerging from around the world of countries forced to destroy millions of vaccine doses due to a slowdown in demand.

Danish health officials announced last week that 1.1 million COVID-19 vaccines will be discarded because they will have expired. Switzerland is expected to destroy over 600,000 expired doses of the Moderna jab.

While the media keeps hyping COVID cases on the blast out of Bourla’s comments, COVID-19 deaths in the U.S. remain at their lowest levels since the start of the outbreak.

The Wall Street Journal pointed out that there is another wave sweeping through the U.S. and despite the wave, people are not dying from the virus. The report pointed out that the country is averaging about 300 deaths per day mostly isolated in the elderly community.

The U.S. is averaging 100,000 new cases each day, which is about four times higher than in March.

The Journal said the number is likely much higher because some people test positive at home and never tell health officials. Thus, the case rate to death rate is lower as well.

Katelyn Jetelina, adjunct professor at University of Texas Health Science Center, told NPR that this summer may not see a health care crisis like previous surges in the U.S.

"Transmission is a lot less because of the ventilation outside," she told the outlet. She also pointed out that the massive surge of infections due to omicron gave the general population "high levels of infection-induced immunity that we have a very high immunity wall."

The Trends Journal has reported extensively on the rush to bring the coronavirus vaccines to market under an emergency order, and how governments across the globe have slowly moved to force vaccination. (See “HAVE THE ARCHITECTS OF THE COVID-19 PANDEMIC LOST TOUCH WITH REALITY?,” “COVID-19 VACCINES: TRACKING ADVERSE HEALTH EFFECTS” and “AUSTRIA: ‘NO VAX, NO FREEDOM.’”)

We correctly said the COVID War would wind down in March because the economy could not survive more months of restrictions. China is one of the only countries still trying for a “Zero-COVID” policy.

TRENDPOST: Bourla, and other drug-pushers, likely do not want to miss out on the COVID-19 profit windfall and complained to the audience at Davos that there are billions of unused COVID-19 vaccines sitting in warehouses around the world. Indeed, as we reported on 15 March, more COVID Shots are the bottom line (See “PFIZER CEO SELLING ‘GET YOUR FOURTH SHOT.’”)

These doses are meant for low-income countries and are paid for by rich ones. Bourla said the vaccine doses aren’t being used because the population in these poor countries is not educated enough to create demand for them.

This is not the first time that Bourla seemed to be personally offended by those hesitant to take the jab. (See “PFIZER DRUG LORD PUSHING YEARLY COVID JAB. CALLS THOSE WHO WON'T SWALLOW THE BULLSHIT 'CRIMINALS.’”)

We reported in our 9 November issue that the global COVID-19 war is entering its next phase and drug makers are adapting by developing antiviral medications.

TRENDPOST: As we had reported in April, Pfizer, already the lead seller of the COVID Jab, has contracts to supply other countries and expects Paxlovid to add $5 billion to its yearly sales; its stock rose 11 percent on news of the new pill, whereas Merck's stock price fell; see "DRUG COMPANIES CASHING IN ON COVID" (11 May 2021) and “MORE COVID JABS, MORE BIG BUCKS FOR DRUG LORDS” (21 Sep 2021).

TRENDPOST: Why believe Pfizer? As we have reported in numerous Trends Journals, the Operation Warp Speed “miracle vaccines” are a fraction of the 96 percent efficacy which was sold to the public when they were launched last December.