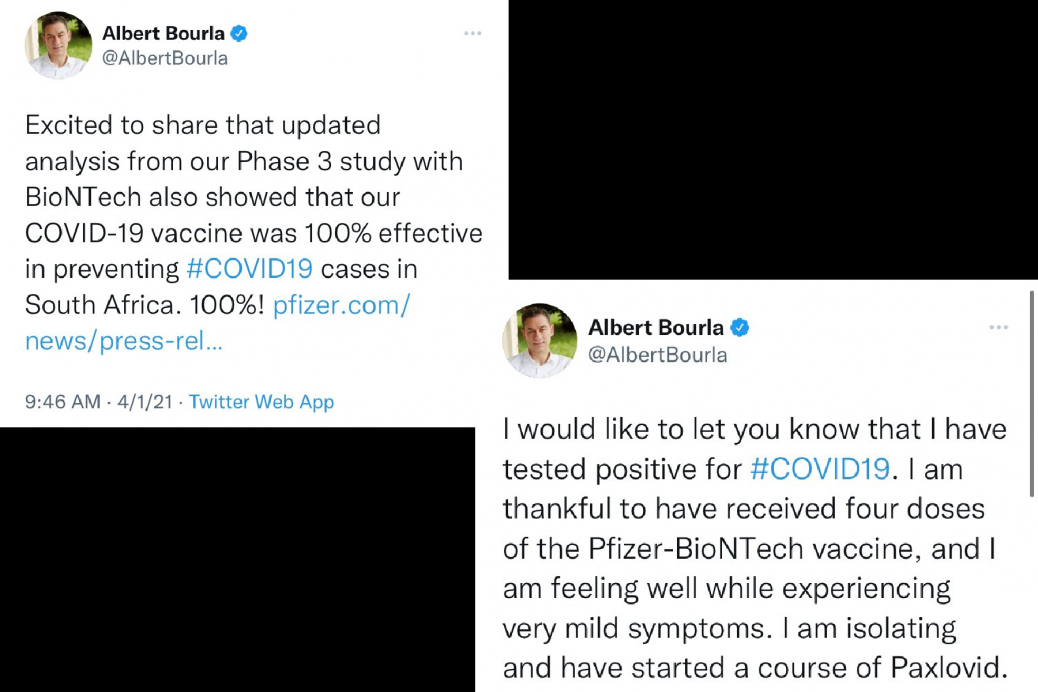 Albert Bourla, the CEO of Pfizer who earned $24.7 million in total compensation in 2022 by selling COVID-19 vaccines, announced Monday that he came down with the coronavirus despite being quadruple vaxxed.

Speaking to the world of imbeciles who swallow shit, Bourla bragged; "I would like to let you know that I have tested positive for #COVID19," Bourla tweeted. "I am thankful to have received four doses of the Pfizer-BioNTech vaccine, and I am feeling well while experiencing very mild symptoms. I am isolating and have started a course of Paxlovid."

The Trends Journal has documented the long list of celebrities and politicians who sold the vaccines and yet came down with the virus anyway. Most said they were “grateful” to have received the vaccine while announcing their infection (See “GET VAXXED, GET COVID: THE ONES THAT GOT IT BRAGGED THEY GOT THE JAB.”)

Bourla has long touted the vaccine’s efficacy. He shared a press release on Twitter on April Fools’ Day 2021 and posted, “Excited to share that updated analysis from our Phase 3 study with BioNTech also showed that our COVID-19 vaccine was 100% effective in preventing #COVID19 cases in South Africa. 100%!”

We have reported on some of the health risks that come with these vaccines and how executives like Bourla became fabulously wealthy. (See “PFIZER: DRUG DEALERS ON PARADE,” “COVID-19 VACCINES: TRACKING ADVERSE HEALTH EFFECTS,” and “PFIZER DRUG LORD PUSHING YEARLY COVID JABS. CALLS THOSE WHO WON’T SWALLOW BULLSHIT, ‘CRIMINALS’.”)

U.S. Secretary of Defense Lloyd Austin announced Monday that he tested positive for the virus for the second time since January. He said he is vaccinated and boosted and credits the vaccine for his mild symptoms.

Austin has been a major vaccine proponent and has said 30 June was the deadline for members of the National Guard Reserves to receive the jab. About 60,000 National Guard and Reserves are unvaccinated. The U.S. military forces servicemen and women to take the vaccines.

President Joe Biden recently tested positive and came down with a rebound case after taking Paxlovid. The president has since tested negative.

With each new “breakthrough” infection, the public seems to be less interested in taking the vaccine that “health experts” say does not respond as well to new variants.

A British and Scottish study released last week found that the vaccine begins to wane in teens 27 days after receiving the second jab. Estimated vaccine effectiveness peaked 14 to 27 days after dose two, the study said.

TRENDPOST: It has been widely reported that vaccines are becoming less effective and for a shorter period of time when preventing infection from variants like Omicron, and the now-dominant Omicron sub variant called BA.5.

Yet, those who are fully vaxxed and boosted brag how happy they are that they got vaxxed and got COVID, and the media reports this as though it makes sense. Yet, NEVER a word from the Presstitutes about all those who build up their immune systems by eating healthy and taking vitamins and supplements to fight off the virus. That, in the new Woke World of Inhumanity is called “misinformation” and blackballed by governments across the globe.