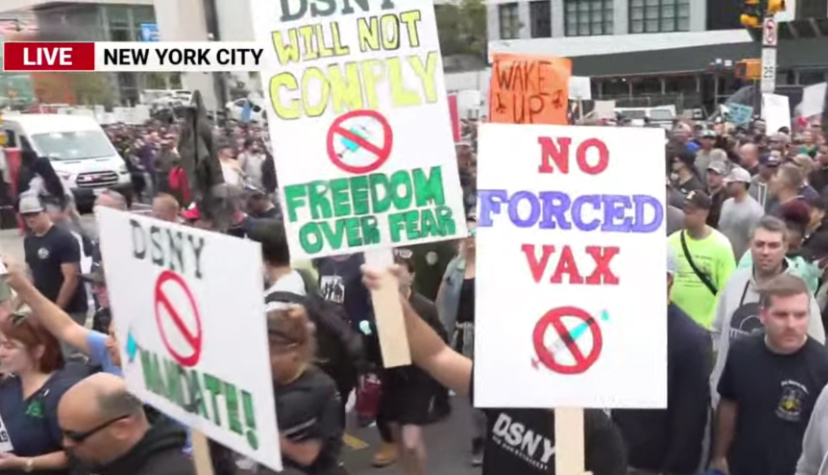 The move comes as the agency has taken the lead in writing the rule for a workplace vaccine mandate proposed by President Joe Biden.

Fed labor officials have recently threatened to intervene in the workplace safety programs of Arizona, South Carolina and Utah.

According to the healthcare industry website modernhealthcare.com, the enforcement action involves not adhering to OSHA level standards for physical separation, cleaning, physical barriers, personal protective equipment, ventilation, and other safeguards.

A nominal majority of states simply adopt OSHA guidelines in workplace safety matters. But 21 states have their own workplace safety authorities for private sector firms. These states must comply with or exceed OSHA requirements, or risk losses in federal funding and possibly other penalties.

The intervention is viewed as a signal that OSHA will soon attempt to exercise the same authority with respect to Biden’s business vaccine mandate.

Who Is Really Protecting Workers?

Earlier this month, in response to Biden’s mandate order, OSHA sent a proposed rule to the White house that would obligate companies with 100 or more employees to mandate vaccination or regular testing.

The agency could publish the new rule any day, and it would take effect immediately.

Remember sanctuary cities? Florida under Governor Ron DeSantis is leading an effort for Florida to be a vaccine sanctuary state.

DeSantis, often cited as a potential 2024 Republican Presidential candidate, recalled the Florida legislature into session in September to vote on legislation that would heavily fine localities that tried to impose vaccine mandates.

The whole issue of vaccine mandates has become a battle for the longstanding constitutionally protected rights of Americans to make their own personal healthcare decisions.

Many Americans are opposed to the so-called COVID “vaccines”, which actually involve gene level alterations, and use of controversial stem cell lines, on religious grounds.

Some view the vaccines as an unnatural alteration that corrupts the sanctity and dignity of natural humanness of creatures made in the image of God.

Others point to the use of stem cell lines from aborted fetuses in the creation and testing of the vaccines.

The First Amendment to the Constitution prohibits the Federal government from infringing on broad rights of Americans to freely exercise their religious beliefs:

“Congress shall make no law respecting an establishment of religion, or prohibiting the free exercise thereof; or abridging the freedom of speech, or of the press; or the right of the people peaceably to assemble, and to petition the government for a redress of grievances.”

Many others oppose the vaccines on grounds of personal autonomy and conscience, pointing to numerous incidents of serious adverse events that the government has made little effort to accurately record and investigate.

In fact, the government has proved to be anything but an honest broker with regard to many aspects of the COVID War. That in itself has led many to oppose vaccines.

To date, an estimated 57 percent of Americans have been vaccinated. Those numbers would almost certainly be lower, if there wasn’t relentless pressure to do so, as well as active suppression and censorship of viewpoints and information critical of the vaccines.

OSHA may be trying to establish precedent for going after States in the near future who are opposing vaccine mandates.

But vaccines are a whole different matter than “cleaning procedures.”

Even regarding the supposed lapses of Utah, Arizona and South Carolina regarding other COVID emergency protocols, some politicians have noted that OSHA doesn’t have much of a history of successful bullying.

“It’s doubtful OSHA would start the process to invalidate a state plan,” Utah Labor Commissioner Jaceson Maughan told state lawmakers at a recent committee meeting on the matter. “I think there would be multiple letters, multiple requests, a demand that it’s adopted and then some more discussions.”