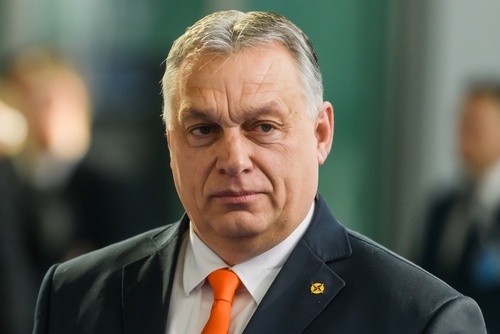 Orban's nationalist Fidesz party pulled in 135 of the 199 seats in Parliament. The party won 53 percent of the vote with nearly all the ballots tallied. CNN called it a commanding victory, despite the public rebuke from Zelensky.

After the election win, Orban told the AFP that he has “many opponents.”

He said he was up against the “left at home, the international left all around, the Brussels bureaucrats, the [George] Soros empire with all its money, the international mainstream media, and in the end, even the Ukrainian president.”

Zelensky, who is benefiting from surging popularity due to fawning media coverage in the West, has become bolder in his criticism of leaders he determines are not suitably supportive of his war effort. (See “ZELENSKY SAVES HIS BEST ACT FOR U.S. CONGRESS DURING VIDEO,” “TREND ANALYSIS: U.S. NEWS OUTLETS PERFORM PROPAGANDA ACROBATICS IN UKRAINE WAR” and “WARMONGERS ON PARADE: WEST SENDS MORE WEAPONS TO UKRAINE TO KEEP THE KILLINGS GOING.”)

Zelensky last month read off a list to EU of countries unsupportive of Ukraine, according to the Financial Times. Orban was on that list despite pledging to help Ukrainians, just not militarily. He also kept trade in place with Moscow.

“Listen, Viktor, you know what’s going on in Mariupol?" Zelensky asked, while the city was under attack. “Mass killings can happen again in today’s world. And that’s what Russia is doing today… Once and for all you have to decide who you are with.”

Zelensky on Saturday called Orban “virtually the only one in Europe to openly support Mr. Putin.”

TRENDPOST: Zelensky is completely outmatched by Russian firepower and is only alive today thanks to the billions in “lethal weapons” delivered to Ukraine by the U.S. and NATO.

But despite being backed into the corner, he tries to present himself as though he is coming from a position of strength.

Recognizing this reality, Orban, who has been friendly with Russia, dismissed Zelensky’s line in the sand ultimatum.

Orban has made enemies in Brussels, particularly with Poland, over his close ties with Moscow and some political observers say he will have to eventually make a choice between the EU and Moscow.

Russian President Vladimir Putin took to Telegram messaging app to congratulate Orban on his victory, saying, “Despite the difficult international situation, the further development of bilateral ties of partnership fully accords with the interests of the peoples of Russia and Hungary.”

The BBC said Orban called his victory “huge” and could be seen "from the Moon, but certainly from Brussels as well.”

TRENDPOST: Orban’s victory is further proof that the coalition against Russia that the West is trying to mold is not coming together as hoped.

China and India have not changed their stance against Russia and Finland and Sweden are still not members of NATO.

Orban’s first job is keeping the welfare of Hungarians as his top agenda item, and good relations with Russia seem to be a practical approach.