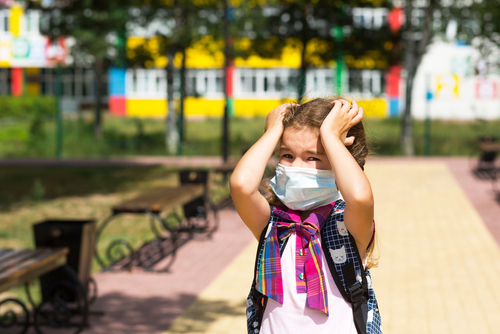 Eric Adams, the New York City mayor who recently caused a stir for allowing athletes not to be vaccinated, announced Friday that children under the age of five will still be forced to wear a mask inside schools despite having virtually no chance of coming down with symptomatic COVID-19.

“New Yorkers, we want you to be prepared, not panicked,” he said at a news conference, according to The New York Times.

The paper reported that Adams was planning to lift the mandate for schools, but he kept the masks for preschoolers in place because they are too young to be vaccinated. Adams’ decision was challenged in court, but the city appealed a Staten Island judge’s ruling and won.

Justice Ralph Porzio, from the State Supreme Court, ruled on 1 April in favor of parents who sued the city. These parents called the mask mandate for children “absurd” because the requirement had been shelved for children in the public school system five and over, The Gothamist reported.

The city won the appeal.

TRENDPOST: We have long reported that study after study has shown no benefit by having mask mandates for children. In fact, these masks could be emotionally scarring. (See “CDC: KEEP MASKS ON KIDS, IGNORE EMOTIONAL SCARRING.”)

Moreover, young, masked-up children are being raised in a constant state of health fear by being forced to mask up; social distance; and obey unscientific, draconian rules that are robbing them of the freedoms of growing up and running wild.

Adams’ announcement came shortly after the city’s Department of Health said the seven-day positivity rate was up 2.67 percent, up from 2.26 percent the week prior, CBS New York reported.

The Centers for Disease Control and Prevention said that since the outbreak, about 18 percent of COVID-19 cases have been in children and more than 118,000 have been hospitalized and 1,400 have died.

There are 73 million children in the U.S. The New York Post reported that COVID-19 hospitalizations for children under 18 are 0.5 per 100,000 and have been for months.

Video also emerged of Adams at a party prior to the announcement without a mask with model Cara Delevigne dancing next to him holding a bottle of champagne. (See “FACE MASKS: ENOUGH ALREADY,” and “POLITICAL FREAKS CAUGHT LYING, KEEP LYING…WHILE ORDERING PEASANTS TO ‘OBEY.’”)

The New England Journal of Medicine published a report last week that said COVID-19 vaccines were less effective in preventing hospitalizations with a milder form of the virus, which the Times said was “consistent with studies showing that, across all age groups, the vaccines lost much of their power against infection with the Omicron variant but still prevented severe illness and death.”

The report said the vaccines were also less effective in preventing hospitalizations in children 12 and older during the Omicron surge. Researchers at Case Western Reserve University found that children under the age of five who came down with the Omicron variant were less likely to have a serious illness when compared to those with Delta.

About 18 million children in the U.S. are not eligible for the vaccine. At least 400 children four and younger have died from the virus according to the CDC.

Dr. Manish Patel, a researcher at the CDC, who led the study about the vaccines’ effectiveness, told the Times that most of the children who became critically ill with the virus had underlying conditions.

The paper pointed out that 78 percent of the adolescents who were hospitalized had underlying conditions like obesity. (See “COVID-19 & OBESITY: THE MORE YOU WEIGH, THE WORSE OFF YOU ARE.”)

“The major conclusion to our research was that many more children were infected with Omicron when compared to Delta, but the children who are infected are not impacted as severely,” Pamela Davis, one of the study’s researchers at the Case Western Reserve School of Medicine, said in a press release.