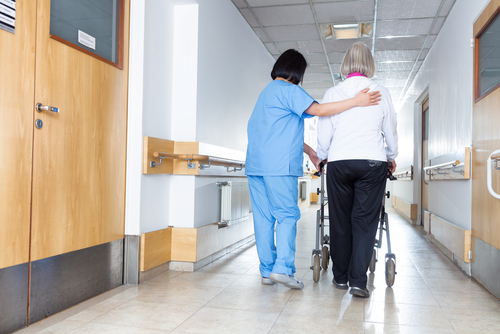 The New York Times, on 21 October, reported that after the number of COVID-19 cases and deaths among U.S. nursing home residents declined markedly earlier this year, August and September saw the numbers rise again, with some 4,000 deaths reported nationwide.

And this is in spite of nearly 90 percent of residents being fully vaccinated.

Because of their advanced age and other medical conditions, nursing home residents tend to be susceptible to breakthrough infections of COVID-19. But, in general, the workers who care for them have not been vaccinated at the same rate, nor are they rushing to get their shots.

President Biden announced a mandate for most workers to be vaccinated, but as we have noted and as Judge Andrew Napolitano has detailed in his podcasts with Gerald Celente, the enforcement apparatus is in violation of the Constitution.

Therefore, many in the industry are waiting for new rules to be disclosed, which is supposed to happen this month. Vaccination rates for nursing home workers rose as high as 69 percent upon announcement of the mandate, but some facilities still report a rate of less than half; ten states, including Florida, Michigan and Ohio, still report a vaccination rate for nursing home staff at under 60 percent.

TRENDPOST: Trends Journal readers know that "the vaccine works," except when it doesn't; see "ISRAEL: COVID DRUG MUCH LESS EFFECTIVE THAN WHAT WE'VE BEEN SOLD" (27 Jul 2021).

Nursing home operators and trade groups don't expect to see increases in vax rates among workers, and many are advocating for testing as an alternative to the vax mandates, which they fear will result in employees leaving the industry rather than be forced to get the shots; that would threaten the facilities' ability to operate. One nursing home chain offered its workers raffles with prizes of trips to Disneyworld and $5,000 in cash, but response was still minimal.

So mandates are seen as the remedy to vaccine hesitancy on the part of nursing home staff, and the NYT article quotes Dr. Ezekiel Emanuel as proclaiming his support for such mandates.

TRENDPOST: The NYT article fails to note any irony in Dr. Ezekiel Emanuel endorsing policies meant to benefit nursing home residents; this is the very same Dr. Emanuel whose name came up so often in discussions of "death panels," and who is infamous for his declaration that life after 75 is not worth living, nor worth preserving; see "PAUL CRAIG ROBERTS: DON'T TAKE THE COVID VAX, PART ONE" (23 Feb 2021). Dr. Emanuel (allegedly a "bioethicist"!) has also stated that "doctors take the Hippocratic Oath too seriously."

The NYT article also fails to examine just why nursing home workers seem to harbor such hesitancy about personally submitting to the COVID jabs; not so for the Trends Journal, however. One plausible explanation, posited in "WHY VAX RATES LAG AMONG NURSING HOME AIDES" (21 Sep 2021), is that "they are likely to have witnessed firsthand patients suffering from side effects of the vaccines," and "not only have they seen it, they deal with it constantly."

And as to vaccine hesitancy in general, consider this: "MIT STUDY: THOSE REFUSING THE COVID JAB ARE NOT RIGHTWING CONSPIRACY THEORY IGNORANT MORONS" (28 Sep 2021).