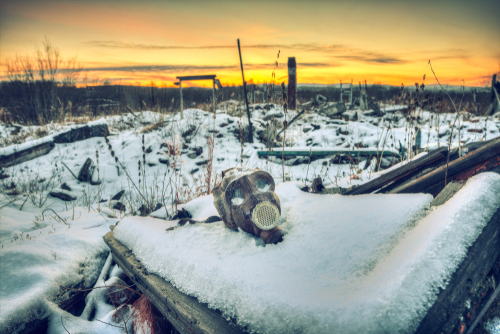 As we keep noting, World War III has begun.

So, following the melting down from the nuclear blast and burning to death, researchers conducted a study to examine what a nuclear war with Russia could look like and found that an exchange of about 4,400 100-kiloton warheads would likely result in a “little ice age.”

The study by Louisiana State University’s Department of Oceanography & Coastal Sciences was released a day after Dmitry Medvedev, the deputy chairman of Russia’s national Security Council, warned about nuclear annihilation.

Russia has been locked at war with Ukraine since its 24 February invasion. He has expressed dismay over the West’s support for Kyiv and said, the “idea of punishing a country that has one of the largest nuclear potentials is absurd. And potentially poses a threat to the existence of humanity."

The study simulated a U.S.-Russia war and several India-Pakistan wars. The report pointed out that there are more than 13,000 nuclear weapons in the world controlled by nine nations.

“In all scenarios, firestorms from nuclear war would deliver soot to the upper atmosphere, blocking out the sun and causing global cooling.”

“Nuclear warfare results in dire consequences for everyone. World leaders have used our studies previously as an impetus to end the nuclear arms race in the 1980s, and five years ago to pass a treaty in the United Nations to ban nuclear weapons. We hope that this new study will encourage more nations to ratify the ban treaty,” said co-author Alan Robock, distinguished professor in the Department of Environmental Sciences at Rutgers University.

TRENDPOST: As each day goes by with Western countries providing Ukraine with just enough weaponry to continue its fight against Russia, the world inches closer to nuclear Armageddon. Gerald Celente has said that the West is already in WWIII, but it will not be officially declared until there is a flash from a nuclear detonation.

Russian President Vladimir Putin will not let Ukraine President Volodymyr Zelensky defeat him on the battlefield, so there seems to be a Catch 22 in the entire conflict: If Ukraine continues to lose on the battlefield and is forced to give up more land, that is bad because they are losing. But if, miraculously, Russia begins to lose, that’s bad, too, because Putin would become desperate.

French President Emmanuel Macron, who is just about the only Western leader in touch with Putin, has received criticism for saying that Putin should not be embarrassed on the battlefield. There is no doubt that he is considering Russia’s nuclear arsenal.