NO VAX, NO JOB, NO FUTURE: BIDEN KNOWS BEST 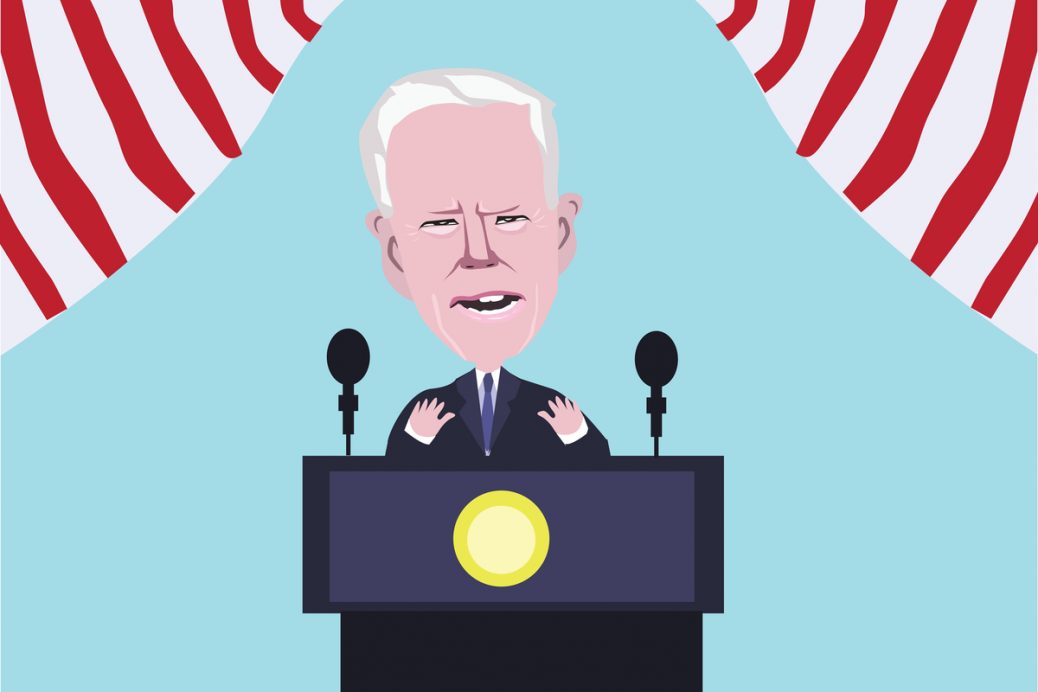 The Biden administration has escalated its authoritarian power trip, including the threat of withholding federal funds, in its quest for universal COVID Jab.

The New York Times reported on 19 August that on that date the president announced that he would make Medicare and Medicaid funding for nursing homes contingent on their employees having been vaccinated against COVID-19. That policy will affect 15,000 nursing homes and 1.3 million employees.

Despite the scores of articles we have published with the hard facts and scientific data of the ineffectiveness of masks to protect people from catching the virus, including “MASKS' BENEFITS A BUST” in this issue of the Trends Journal, U.S. El Presidente Biden also directed his education secretary Miguel A. Cardona to impose his authority, including legal action, to counter efforts of some states to ban universal masking in schools.

With some governors blocking school districts from requiring masks in classrooms, eight states—Arizona, Florida, Iowa, Oklahoma, South Carolina, Tennessee, Texas and Utah—will be receiving a letter from Cardona challenging their refusal to force children to wear masks in school.

Mr. Cardona said that his department will use its civil rights enforcement arm to allow schools to require masks, adding "The president is appalled, as I am, that there are adults who are blind to their blindness, that there are people who are putting policies in place that are putting students and staff at risk. At the end of the day," he said, “we shouldn't be having this conversation. What we're dealing with now is negligence."

On the booster shot front, the government is urging a third shot for adults who were previously thought to be fully immunized after two shots of the Pfizer/BioNTech or Moderna vaccine. About 150 million Americans have been vaccinated with one of those vaccines, which are now—after being sold to have a 96 percent efficacy rate—acknowledged to lose power eight months after the second shot.

The NYT article cites Arkansas Secretary of Health José R. Romero, MD invoking the ever-popular "war" rhetoric, saying "We now have to fight a war on two fronts," alluding to having to overcome vaccine hesitancy in some groups while promoting booster shots to those deemed at high risk.

As yet, up until yesterday, and with a lot of pressure, the FDA had not even authorized third doses, and neither Pfizer/BioNTech nor Moderna had yet submitted all the data to prove their shots are safe and effective.  This shouldn't be surprising, since uncertainty still exists as to whether the original doses are safe and effective; see the December 2020 article, "COVID VACCINE: 'SIGNIFICANT SAFETY CONCERNS'").

TRENDPOST: As reported by the Defender, data released Friday by the Centers for Disease Control and Prevention (CDC) showed that between Dec. 14, 2020 and Aug. 13, 2021, a total of 326,535 adverse events had been reported to the Vaccine Adverse Events Reporting System (VAERS) attributed to Pfizer’s COVID vaccine, including 9,027 deaths and 56,607 serious injuries.

TRENDPOST: As we have noted, go back to last December when so-called health experts, politicians, and the media began selling the COVID Jab. The line was that it was 96 percent effective and that after two jabs, you’d live happily ever after, COVID-free for the rest of your life.

As we have reported, per Israeli findings, it is only a tiny 39 percent effective. Yet, the ineffective jabs are not only being vax-pass mandated, now they are pushing for three shots.

But as we wrote in the 20 April Trends Journal, that line began to fade when the Pfizer Drug Lord said booster shots would be needed. (See “PFIZER CEO: THIRD TIME IS A CHARM”). We noted a CNBC headline: Pfizer CEO Albert Bourla said people will ‘likely’ need a third dose of a COVID-19 vaccine within 12 months of getting fully vaccinated.

Yet, that was largely unreported by the mainstream media and quickly forgotten. Remember, for months they were selling the lie that the vax was 96 percent effective.

And don’t forget the herd immunity lie that after 70 percent of a nation was vaccinated, the herd would reach immunity.

Earlier in April, Pfizer put out a press release stating its clinical trial showed the vaccine to be effective six months after a second shot. But the CNBC report clarifies that “more data is still needed to determine whether protections last after six months.”

Bourla also stated, “It is extremely important to suppress the pool of people that can be susceptible to the virus.” He said “it’s possible people will need to get vaccinated against the coronavirus annually.”

He’s was not the only drug dealer CEO to be pushing the annual jab:

“The comment comes after Johnson & Johnson CEO Alex Gorsky told CNBC in February that people may need to get vaccinated against COVID-19 annually, just like seasonal flu shots. Researchers still don’t know how long protection against the virus lasts once someone has been fully vaccinated.”

“We don’t know everything at this moment. We are studying the durability of the antibody response… It seems strong but there is some waning of that and no doubt the variants challenge… they make these vaccines work harder.”

TRENDPOST: As we have also noted, for these new reports from big drug dealer CEOs saying third doses are likely needed and people should be prepared to get vaccinated for COVID every year, there is solid, scientific reasoning to question whether their profit motives outweigh their concern for the public’s health.

As stated clearly in a 2012 article published in The Independent, “The multi-billion-dollar pharmaceutical industry has spent the last decade developing new drugs which have produced little benefit and caused considerable harm, experts say today.”

The article cited data showing drug companies spend significantly more on advertising and promotion than they do on research for new and better medicines. The article was titled, “Drugs companies putting profit ahead of medical discoveries, warn scientists.”

Yet those who are hesitant to get vaccinated are called “irrational” and “conspiracy theorists” for doubting pharmaceutical companies and refusing to be jabbed with a vaccine that has not been tested for long-term reactions and has questionable efficacy.

In addition, the FDA, which is supposedly vigilant in its protection of the American public, has backed the big drug dealers’ drugs that the CDC says are deadly: “Prescription drugs have become the fourth leading cause of death in the U.S. They kill more Americans than breast cancer, prostate cancer, homicide, and suicide combined.”

And Harvard University confirms that “When you start a new drug, you have a 1 in 5 chance of having a major health problem caused by the medication.”