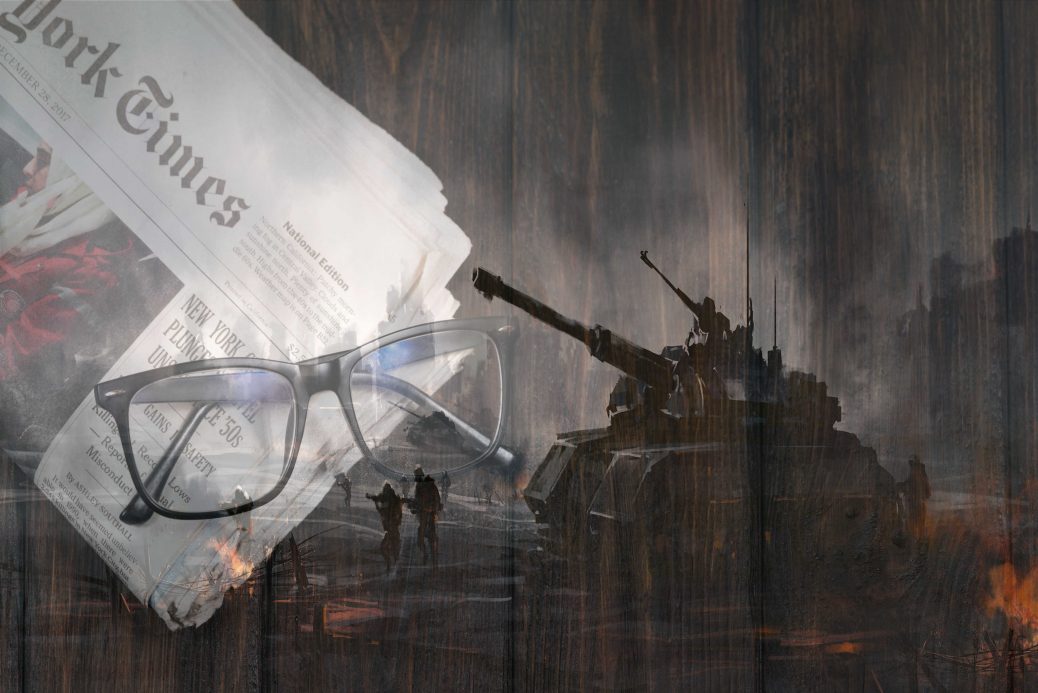 Staying on its war path, but making it pretty, the self-anointed “Paper of Record” The New York Times posted an article last week titled, “U.S. Military Coordinates a Sort of Wedding Registry for Arms to Ukraine.” It was written by Eric Schmitt, a top hack reporter at the paper who won a Pulitzer Prize.

Keeping on its war footing, the Times published an article last week that gave a glimpse into the paper’s approach to the Ukraine War and the U.S. intervention by sending billions of dollars of weapons to Kyiv to keep bloodying the killing fields.

It reads glibly that, “It takes a village to help Ukraine fight the Russians,” and carries the wedding theme throughout. Schmitt describes the dozens of military logistics specialists tucked away in an attic inside the U.S. European Command headquarters in Germany as a “cross between a wedding registry for bombs, bullets, and rocket artillery, and military version of FedEx.”

TRENDPOST: The mainstream media has been pro-war since before Russian tanks ever started to roll into Ukraine. There are several reasons: 1) The U.S. media is nothing more than the propaganda wing of the government; 2) The news writers and producers were taught to hate Russia since they were very young; 3) There is the lingering belief that Russian President Vladimir Putin “must be stopped” in Ukraine or he will take over the world; 4) War is good for ratings.

Schmitt’s article concludes with a quote from Rear Adm. R. Duke Heinz, the European Command’s chief logistician. Heinz was identified as a veteran of the Iraq and Afghan wars, and he told the paper that even he cannot define “what winning looks like for the Ukrainians.”

But the U.S. “and our allies and partners are in it until he [Ukrainian President Volodymyr Zelensky] tells us he doesn’t need any more help.”

The Trends Journal has reported on the media groupthink when it comes to Ukraine. (See “HEY STUPID! PROPAGANDA NETWORKS WILL TELL YOU ‘WHAT YOU NEED TO KNOW ABOUT UKRAINE,” “U.S. ACCUSED OF OPERATING BIOWEAPONS LABS IN UKRAINE, MOUTHPIECE MEDIA PROMOTES GOV’T LINE”  and “TRENDS ANALYSIS: U.S. NEWS OUTLETS PERFORM PROPAGANDA ACROBATICS IN UKRAINE WAR.”)

The Times’ article, as usual, promotes the need to send even more advanced weapons to Ukraine and presents the story as though there is not a single American opposed to escalating the war and promoting peace.

Lloyd J. Austin, the U.S. Secretary of Defense who sat on the board of directors with Raytheon, the nation’s second largest defense contractor...  once again said there is a pressing need to rush weapons like High Mobility Artillery Rocket Systems into Ukraine.

Asking other nations to supply more weapons of death to Ukraine, Austin said, “And so we understand the urgency, and we’re pushing hard to maintain and intensify the momentum of donations.”

Once again, no talk of peace or negotiations... just more war and more weapons of death.

TRENDPOST: The New York Times was blasted by the so-called “liberal” media for their hyping the Iraq War. "This is one of the great journalistic mass delusions of the era," Michael Wolff, a media commentator and columnist for Vanity Fair said back then.

Iraq War lies were bad! But now Vanity Fair is a prime promoter of America’s support for the Ukraine War that lacks the “why” it happened and how corrupt the Ukraine government was and is. (See The Guardian article “Welcome to Ukraine, the most corrupt nation in Europe.”)

Look how Vanity Fair recently pumped up a little comedian who knows shit about Ukraine, how and why the war began and other details: “Ben Stiller Meets His ‘Hero’ Ukrainian President Volodymyr Zelenskyy.”

Who, with a brain bigger than a pea cares what this little comedian Ben Stiller—who’s Daddy was Jerry—believes on a geopolitical scale?

Dumbed down Americans and corporate media, that’s who!