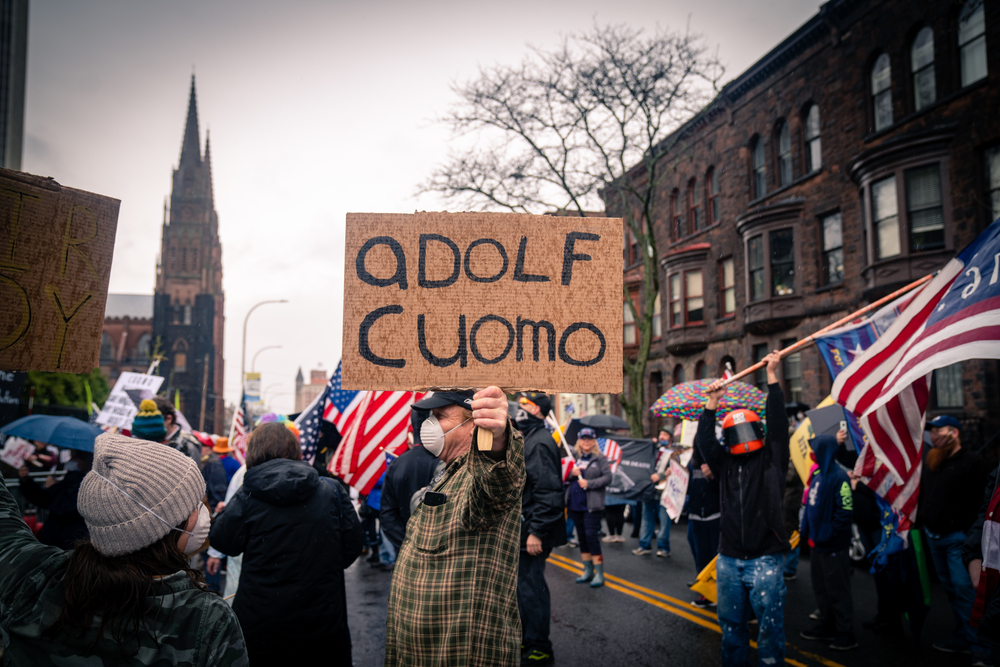 The curfew mandate will expire on 17 May for outdoor dining and 31 May for indoor areas. The state will also allow dancing during catered events as long as the participants wear masks and maintain social distancing.

“To be clear: we will only be able to maintain this process if everyone gets the COVID vaccine… otherwise we risk going backward,” Cuomo said.

Mayor Bill de Blasio announced Thursday that the city will “fully reopen” by 1 July. He told MSNBC that stores and offices will be able to operate at “full strength.”

“This is going to be the summer of New York City,” de Blasio said. “You’re going to see amazing activities, cultural activities coming back. I think people are going to flock to New York City because they want to live again.”

De Blasio told NPR that the vaccines have proven to be effective in protecting people from COVID-19 variants, and he said he was pleased that 6.3 million New Yorkers, out of a city of about 8.3 million, have received vaccinations.

The report pointed out that the American Museum of Natural History is hosting a vaccination drive under its famous blue whale exhibit and then giving those who receive the jab free access to the museum.

TRENDPOST: As Gerald Celente said when the COVID War was launched and rules on social distancing, crowd-size limitations, curfews, mask-wearing, etc., were being imposed on citizens without scientific data to support them: “They’re making this crap up.”

Indeed, how can anyone listen to New York City Mayor Bill “Warren Wilhelm” de Blasio with a straight face when he announced a full reopening for 1 July? Why not 15 June or 5 June?

We are relieved to hear that de Blasio will give his blessing for restaurants, stores, and movie theaters to operate at full capacity, but in what world does a former “Public Advocate” – whatever that is – get to determine what businesses survive as a result of his mayoral dictates and where residents can shop?

Pushing the “Get Vaxxed” government protocol, the mayor pinned his hopes on that New Yorkers “have gotten vaccinated in extraordinary numbers.”

TRENDPOST: Absent in the cheerful glow of Mayor de Blasio and Governor Cuomo’s crowing about New York City reopening was the devastating ghost town they created with their lockdown edicts. As we reported in our 6 October article, “AS GOES NYC, SO GOES THE U.S.A.”:

New York City has been pushed into an economic death spiral by the state’s Governor Andrew Cuomo and Mayor Bill de Blasio who both have imposed tyrannical restrictions. Having destroyed thousands of businesses and hundreds of thousands of lives, their lockdown rules served as a powerful sedative for the “City that never sleeps”... which is now slipping into a coma.

From Wall Street to Times Square, from Broadway to the Meat Packing District… East Side, West Side, all around the town, the “light fantastic on the sidewalks of New York” are burned out. There’s no dancing in the street.

Midtown is no town. Dead and empty. Bars are barren, Broadway is locked down, restaurants are closed, stores are boarded up, hotels closing down, tourists are gone, homicides are skyrocketing… from uptown to downtown, homeless fill the streets.”

The owner of the Empire State Building told The New York Times that 70 percent of the building was occupied in 2019, now only about 48 percent is.

And as we have forecast, with more people doing a large portion of their work from home, as commuter numbers fall, so too will many of the businesses that relied on them fail and the commercial buildings where they worked will go under.