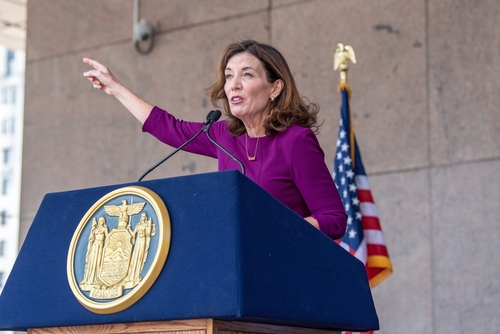 Picking up where the former Governor Andrew Cuomo (who was thrown out of office for feeling up women) left off, New York Gov. Kathy Hochul declared last Friday that she will now dictate what the taxpayers of New York must do.

Having recently ordered all citizens of Slavelandia to wear masks when indoors at public establishments, she has now forced health care workers in the state to take a COVID-19 booster shot because the state needs them “to have the best fortification they possibly can” against COVID-19.

COVID-19 cases have more than tripled in the past few weeks, but hospitalizations are not climbing as fast. The Centers for Disease Control and Prevention reported that only three percent of new cases are being admitted into hospitals.

Hochul, who took over for Gov. Andrew Cuomo, said she insisted on booster shots because she was troubled by the number of breakthrough cases, and the belief is a booster protects against severe infection.

New York health care workers will have to take a booster within two weeks of becoming eligible.

“We’ve already seen what’s been happening in our health care environments,” Hochul said. “Staff is getting sick, they’re leaving. We need them to get well.”

Alex Berenson, the former New York Times reporter who questions vaccine efficacy, has noted that countries with 90 percent of their adult populations fully vaccinated are dealing with a surge in cases they have not experienced up until this point.

“The vaccines sure seem to have failed,” he posted on his Substack account on 6 January. “That’s wrong, though. The reality is worse. The data from several countries now show clearly that infection rates are higher in vaccinated people.”

He said the Omicron variant seems to be a game-changer when it comes to vaccine efficacy and two doses of mRNA vaccines—at their best—offer only 60 percent protection against the variant, and within four months “protection has fallen almost to zero.” He said a third dose gets protection to 70 percent but after two months, protection falls back to 50 percent.

The Omicron variant is said to be a less severe iteration of the virus, but seems to have the ability to evade vaccine protections.

“What then?” he asked. “A fourth dose? A fifth a few weeks after that? How much mRNA do the public health authorities intend to cram in us?”

Stephane Bancel, the CEO of Moderna, told a Goldman Sachs-organized conference last week that individuals who have received a booster shot may need a fourth jab by the fall and “forward.”

He told the conference that he believes the current booster should offer a satisfactory level of protection through the winter surge, he expects, over time, it’s “not going to hold great.”

“We have been saying that we believe first this virus is not going away,” he said. “We’re going to have to live with it.”

TRENDPOST: The Trends Journal has reported on the relentless push by state governments to reach 100 percent vaccination, and when vaccines seem to be falling short of their promises, the reaction is not to reassess, it’s to push for another jab. (See “IS THE WOLD ADOPTING THE WORLD ADOPTING THE WAYS OF NAZI GERMANY?” “U.K. TO REVIEW VACCINE EFFICACY AFTER ISRAEL REPORTS” and “ASTRAZENECA VACCINE DATA UNDER FIRE.”