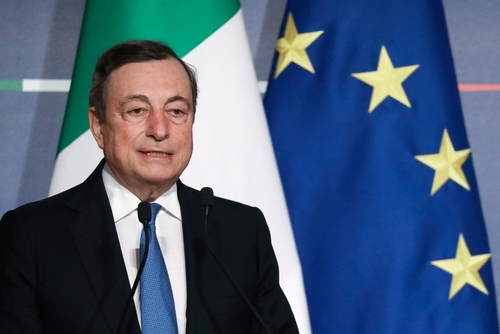 Italian Prime Minister Mario Draghi said the European Union should take a shot at “pragmatic federalism” when it comes to defense and other policies so it becomes more adaptable to crises that may arise after the invasion of Ukraine.

“The institution set up by a predecessors… have served Europe citizens well but they are inadequate given the reality that confronts us today,” Draghi said, according to the Financial Times. “We need a pragmatic federalism: one that encompasses all the areas affected by the transformations taking place, from the economy, to energy, to security.”

The FT reported that one of the centerpieces of Draghi’s proposal is for the bloc to ditch its policy that requires unanimity among member states in some of these policies that he says “leads to a logic of crossed vetoes, and moves towards the decisions taken by a qualified majority.”

“A Europe capable of making timely decisions is a Europe [that] is more credible vis-á-vis its citizens and vis-á-vis the world,” he said.

Draghi’s proposal would also abandon the veto that member states have when it comes to foreign policy topics.

One source of contention in the EU has been Hungary's Viktor Orban, who has threatened to veto a new proposal that would put a full embargo on Russian oil. Orban said such a move would hit his country's economy like an atomic bomb.

The policy states that crude oil purchases from Moscow would end in six months and a full ban would go into effect by the end of 2022.

"The proposal on the table right now creates a Hungarian problem and there is no plan to solve it," Orban said.

Draghi recently told Ukrainian President Volodymyr Zelensky that Italy is fully behind Kyiv and Rome has continued its move toward NATO. Politico pointed out that Draghi broke with his country’s “traditionally soft stance on Russia” and has backed sanctions against Russia. (See “BIDEN’S ‘HATE RUSSIA’ SANCTIONS CAMPAIGN INTENSIFIES” and “RUSSIA ENDS GAS EXPORTS TO POLAND, BULGARIA. GERMANY AND ITALY ARE NEXT.”)

Since he became prime minister last year, Draghi has insisted on close Italian alignment with NATO and the U.S. He has indicated that Europe does not make smart economic decisions when it comes to its military.

“Our security spending is about three times that of Russia, but it is divided into 146 defense systems. The United States has only 34,” he said.

“It’s a profoundly inefficient distribution of resources that hinders the building of a true European defense,” Draghi added, while calling for a “conference to rationalize and optimize … military spending.”

Protests have broken out in Italy against NATO's actions in Ukraine.

Antonio Mazzeo, an Italian journalist and peace activist, told The Intercept that a "majority of political voices and pundits have become uniform.”

“There is a whole segment of the population that rejects the logic of war, of taking sides, of sending weapons, but it hasn’t figured out how to take a position, how to directly intervene in the discourse around this war,” he said.

TRENDPOST: As the great U.S. comedian George Carlin said, “It’s one big club, and you ain’t in it.”

Daddy’s Boy Draghi—born into the upper-class, with long Bankster credentials; World Bank, Goldman Sachs, European Central Bank—has long been pushing for the decline in nationalism and a move toward Globalism.

Thus, his embracing the Ukraine War with the same passion he embraced the draconian mandates he imposed on Italians with the COVID War, exemplifies who he is and what he stands for: The loss of individual freedom and the dictates of the political nobility.