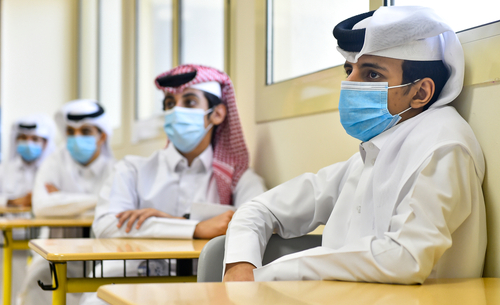 Some call them vaccines.

The controversial mRNA and DNA COVID technologies that have been routinely likened to traditional vaccines despite radical differences, have been conclusively shown inferior to natural immunity in Qatar.

Why is that so significant?

Because that Middle Eastern country has had one of the highest rates of uptake of COVID vaccines of any nation on earth.

Two studies, published respectively at medRXiv, the preprint server for Health Sciences, and in The New England Journal of Medicine, tell the story. Taken together, they show:

The medRXiv posted study specifically found that although natural immunity waned in effectiveness at warding off subsequent COVID infections, it conferred virtually unchanged 90+ percent protection against serious effects of reinfection by any variant.

“Protection of natural infection against reinfection wanes and may diminish within a few years. Viral immune evasion accelerates this waning. Protection against severe reinfection remains very strong, with no evidence for waning, irrespective of variant, for over 14 months after primary infection.”

The study at medRXiv looked at the duration of protection afforded by natural infection in Qatar, from a period between February 28, 2020 and June 5, 2022.

The study notably considered data from the Qatari National digital-health information platform, which covers the country’s entire population. Though it has not yet been peer reviewed, it aligns with what many medical experts have been saying about natural immunity.

In the U.S., even CDC professionals have been more vocal of late in decrying that agency’s willful suppression of the benefits of natural immunity against serious COVID outcomes.

Last week a New York Post article detailed the frustration scientists at both the CDC and FDA are voicing: concern over those agencies' refusal to follow the actual science over important matters including natural immunity, lack of data to back giving COVID vaccines to young children, and ineffectiveness of masking children to prevent COVID spread.

Meanwhile, a study published in NEJM and dated from December 2021, looked at vaccinations that occurred from January to September of that year.

According to the study’s abstract, effectiveness of the Pfizer vaccine in preventing serious COVID outcomes peaked within six weeks of administering, and waned steadily from that point:

It increased to 36.8% (95% confidence interval [CI], 33.2 to 40.2) in the third week after the first dose and reached its peak at 77.5% (95% CI, 76.4 to 78.6) in the first month after the second dose. Effectiveness declined gradually thereafter, with the decline accelerating after the fourth month to reach approximately 20% in months 5 through 7 after the second dose. Effectiveness against symptomatic infection was higher than effectiveness against asymptomatic infection but waned similarly. Variant-specific effectiveness waned in the same pattern.

The Trends Journal has been pointing to the evidence indicating the benefits of allowing natural immunity and herd immunity to protect the bulk of populations practically since COVID appeared on the world stage. See for instance: