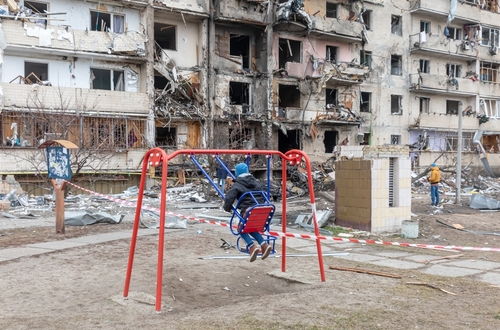 Jens Stoltenberg, the head of NATO, said in an interview on Sunday that it is likely that the Ukraine War could drag on for years and that Western countries should prepare for the long haul.

Stoltenberg made the comment during an interview with the German newspaper Bild. He said we must “not let up” in supporting Ukraine.

“We must prepare for the fact that it could take years,” he said. “We must not let up in supporting Ukraine. Even if the costs are high, not only for military support, [but] also because of rising energy and food prices.”

His comments reflect a shift that seems to be occurring among Western leaders. Boris Johnson, the British prime minister, also said that it is important to “steel ourselves” for a long war, according to The Guardian.

“There is now a burning imperative to forge an army capable of fighting alongside our allies and defeating Russia in battle,” Sanders wrote.

"Russia's invasion of Ukraine underlines our core purpose to protect the UK by being ready to fight and win wars on land," he said. “There is now a burning imperative to forge an army capable of fighting alongside our allies and defeating Russia in battle. We are the generation that must prepare the Army to fight in Europe once again.”

“Everything will depend on whether Ukraine can strengthen its ability to defend its soil faster than Russia can renew its capacity to attack,” Johnson said. “Our task is to enlist time on Ukraine’s side.”

Johnson has been one of the most outspoken critics of Russian President Vladimir Putin and agreed with Ukrainian President Volodymyr Zelensky who said Moscow should not be able to keep an inch of territory.

“Such a travesty would be the greatest victory for aggression in Europe since the Second World War,” he wrote.

Johnson laid out a four-point plan for "constant funding and technical help" for Ukraine that will be maintained for "years to come," with the option to increase efforts.

"Obviously, we expect Russia to intensify hostile activity this week ... We are preparing. We are ready," he said.

Mark Voyger, a senior fellow with the Transatlantic Defense and Security Program at the Center for European Analysis, pointed out that Russia is planning to conduct military exercises with Belarus over the next few weeks, according to Express.co.uk.

“The concern is that Putin has been trying to put pressure on [Belarus President Alexander] Lukashenko and force him to take a more aggressive stance to launch more aggressive actions out of Belarus involving Belarusian troops,” he said. “These drills will cause serious concern because, unfortunately, Russia and its allies have consistently been using military drills as a mask to cover their aggressive actions.”

TRENDPOST: The Trends Journal has long warned that the longer the Ukraine War drags on, the more dangerous it is for the world, especially with leaders like Prime Minister Boris Johnson. These leaders are either willfully ignorant about the realities on the ground in Ukraine or are suicidal.

The Russian military, if unleashed, would roll over Ukraine within days, and the Kremlin has refused to even refer to its military action as an “invasion.” No doubt the reason for this is that Russia does not look at the conflict as an invasion because Kyiv would not still be standing.

It seems as though Johnson will not be content until he is the one referred to as the Winston Churchill of our time and the only way he can achieve that is a world war.

And as for the “heroic” statement of Gen Patrick Sanders, who said British forces need to prepare “to fight in Europe once again,” this is pure lunacy.

First of all, as Gerald Celente often states, “Generals are always fighting the last war”... and Sanders statements illustrate this. Should Europe go to war with Russia, the troops on the ground will be ground up in nuclear dust. And, with troops on the ground in Europe, the countries will be bombed to ruin. Yet, these facts are totally ignored by a Presstitute media which is as mentally deranged as the politicians that run the planet.