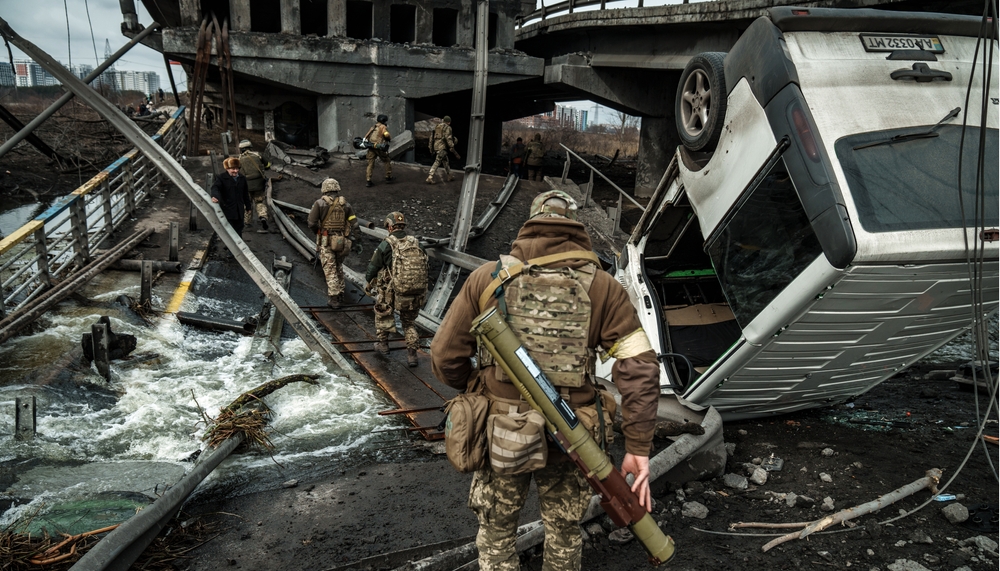 "Today, 26 countries as well as the European Union have met here in Copenhagen and have sent a clear signal. Ukraine's fight is our fight. We stand together and we stand with Ukraine," Morten Bodskov, the Danish Defense Minister, said.

Volodymyr Zelensky, the Ukrainian president, addressed the leaders and thanked them. He said he believes that “this format of cooperation will accelerate our joint victory.”

TREND FORECAST: The Trends Journal has identified the explicit one-sided propaganda effort of Western leaders to describe the Ukraine War as though it is a fight against warmongering Russia and the peace and democracy loving West.

Ignoring the fact of why and how the Ukraine War began, the effort is intended to get the public conditioned to refuel the Cold War between Russia and the West so that when WWIII is officially launched, the people will be conditioned.

We've seen the tactics used in May, when U.S. Defense Secretary Lloyd Austin referred to the need for ‘us’ to win the fight against Russia. (See “THE MASTERS OF WAR, AT WAR WITH RUSSIA.”)

Secretary of State Antony Blinken also said at the time, “We don’t know how the rest of this war will unfold, but we do know that a sovereign, independent Ukraine will be around a lot longer than Vladimir Putin is on the scene. And our support for Ukraine going forward will continue. It will continue until we see final success.”

The U.S. has, by far, donated the most in military equipment to Ukraine since the start of the war. The latest package from the U.S. included HIMARS rocket systems, artillery, Javelin anti-tank systems, and explosives.

"We have given more than $60 billion to Ukraine. Well, the European countries, who are obviously far more affected than us, have given only a tiny fraction of that number," proclaimed former U.S. President Donald Trump on 25 July.

Thus, as Gerald Celente has long said, considering the military aid and reports of U.S. intelligence advising Ukraine in its fight against Russia, the U.S. is not in a proxy war with Russia…Washington is at war with Moscow.

The West has approached the conflict as though it was in a duel with Putin, and the person who flinches first loses.

Ben Wallace, the British defense secretary, said the meeting in Copenhagen is proof that Putin’s “ambition (of breaking up Western support for Kyiv) has failed. We are still determined.”

Bodskov said the Czech Republic, Slovakia, and Poland “signaled a willingness” to increase their production of ammunition and other forms of lethal weapons.

Britain vowed more than $204.6 million of the $1.2 billion already promised in late June, and Denmark said it will provide Ukraine with an additional $113.6 million in weapons and training. Some of the training will include Ukrainian troops in Denmark and Iceland.

In all, 26 European countries pledged support.

TREND FORECAST: The new weapons will do nothing to help the conditions on the ground and Russia will continue to defend its new territory while seizing more. Kyiv should have read The Trends Journal instead of listening to the war hawks in Washington who never saw a war they didn’t like… if they aren’t the ones fighting.

But Ukraine continues to crumble. The Kyiv School of Economics said in a report on Wednesday that there has been more than $110 billion in damage to Ukraine’s infrastructure.

While Zelensky talks about retaking land from Russia, Dmitry Medvedev, the former Russian president, visited Luhansk, which is in the Donbass, to discuss the rebuilding effort by “restoring infrastructure, repairing hospitals and preparing schools for the start of the school year, solving social problems, and supporting civilians.”