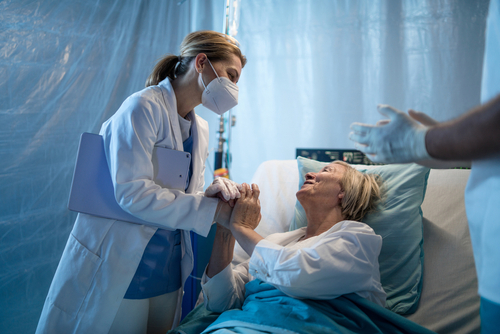 About 52 percent of Americans polled said they’ve been diagnosed or are convinced that they came down with COVID-19 and have recovered, according to a newly released poll by Monmouth University.

Of those, 42 percent said they were officially diagnosed and the other 10 percent claimed they were certain they were infected.

The poll was conducted by telephone from 10 March to 14 March and questioned 809 adults.

The Monmouth poll was significant because it is believed to be the first poll that found a majority of Americans believe they had the virus.

The study asked the public various questions about COVID, including the government's approach to limiting infections through lockdowns and mask-wearing.

About 34 percent of the public wanted all COVID protocols to end, while about half wanted the government to be able to react to outbreaks as they arise.

About 73 percent agreed with the statement that “it’s time we accept that COVID-19 is here to stay and we just need to get on with our lives.”

Support for face masks and social distancing guidelines fell from half of the public to just a third since January.

Patrick Murray, director of the independent Monmouth University Polling Institute, said in a statement that the percentage of those polled who want to get on with life with COVID in the background is about 3 percent higher than in January.

“Our working hypothesis was that many people who support mandates simply wanted consistency in the guidelines,” he said. “This new data suggests that is not necessarily the case. For some Americans, getting on with life means constantly being on guard and ready to reinstitute restrictions as new situations emerge.”

The Monmouth poll found that the public’s interest in getting a booster shot has stalled with just about 48 percent of the public rolling up their sleeves for one. About 33 percent of those polled said they are unlikely to get another shot, the study said.

CNN, citing data from the U.S. Centers for Disease Control and Prevention, said children between 5 to 11 are the least vaccinated group in the country, with less than 10 percent being fully vaccinated.

TREND FORECAST: Just like the flu shots, a sizable number of fearful people will get a yearly COVID Vax shot.

Furthermore, the drug dealers plan to develop vaccines that target particular variants of COVID-19, and people could be encouraged to get them annually, on the model of flu shots.

Trends Journal reported in “DRUG COMPANIES CASHING IN ON COVID” (11 May 2021) that Pfizer considers COVID-19 as providing a "durable revenue stream."

Dr. Marty Makary, a surgeon and public policy researcher at Johns Hopkins University, took to Twitter on 29 March to raise suspicions about a fourth COVID jab.

Makary said “political interference” was what led to two high-level departures from the Food and Drug Administration last fall because “there is no greater slap in the face of science than bypassing the customary FDA external expert voting process over an authorization with insufficient supporting clinical data.”