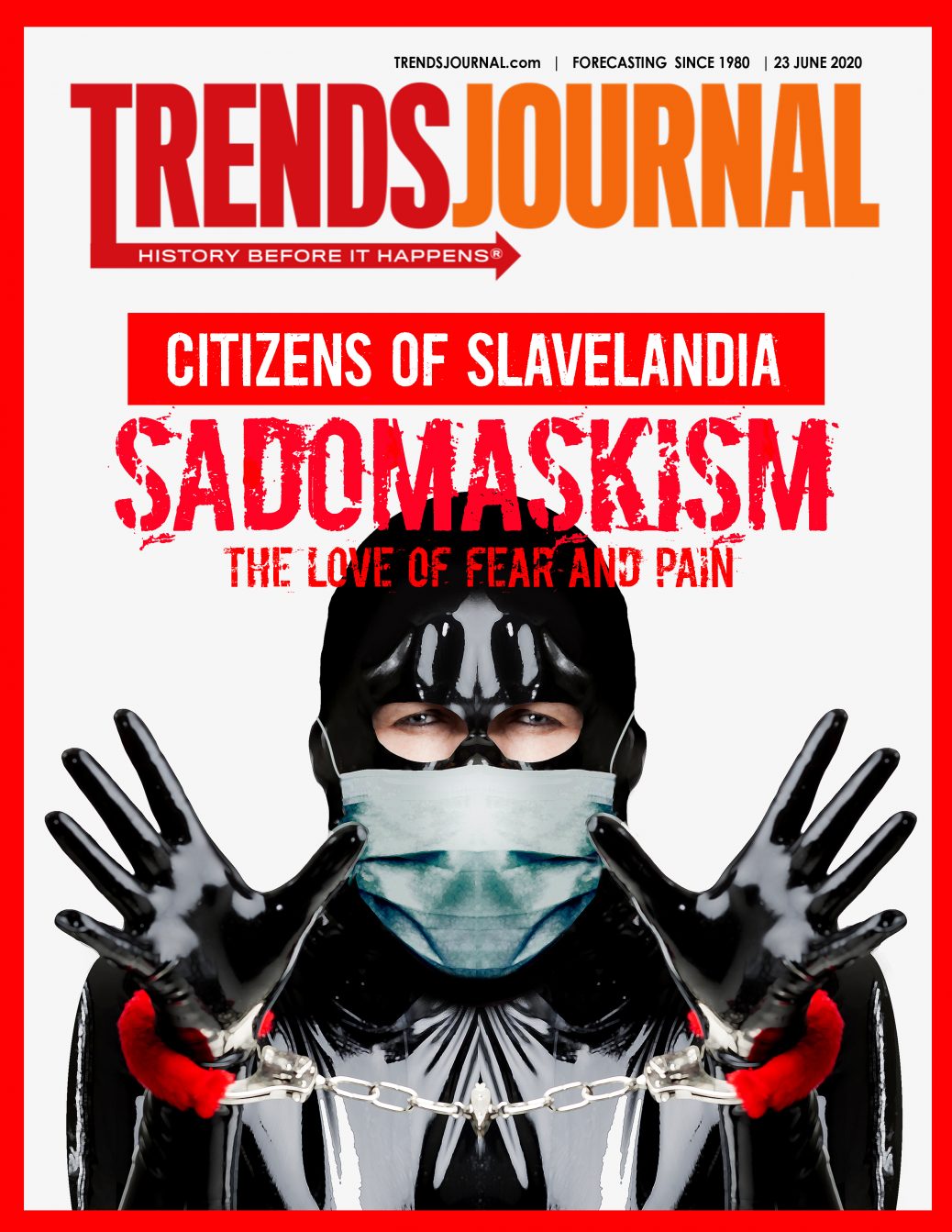 Yet, mask wearing has become the new ABnormal.

For example, told by “experts” that wearing a mask will stop someone from catching the virus or, if infected, from passing it on to others, for most Americans frightened by the COVID War, they walk down empty streets, hike, and ride bicycles with their masks on… and even drive alone in cars with windows up and masks on.

Because the media and politicians, on a non-stop “Spread Fear & Hysteria” campaign to boost ratings, has convinced the sound-bite public to wear them.

Virtually absent in mainstream coverage or from political “Executive Orders” demanding citizens to wear masks in public is the scientific data on the effectiveness of mask wearing to support their dictates.

For example, The New England Journal of Medicine concludes:

“We know that wearing a mask outside health care facilities offers little, if any, protection from infection. Public health authorities define a significant exposure to Covid-19 as face-to-face contact within 6 feet with a patient with symptomatic Covid-19 that is sustained for at least a few minutes (and some say more than 10 minutes or even 30 minutes). The chance of catching Covid-19 from a passing interaction in a public space is therefore minimal. In many cases, the desire for widespread masking is a reflexive reaction to anxiety over the pandemic.”

In locked-down California, the state’s Health and Human Services Agency declares, “There is limited evidence to suggest that use of cloth face coverings by the public during a pandemic could help reduce disease transmission.”

In fact, even American media’s “leading infectious disease expert,” Dr. Anthony Fauci, had recommended not to wear one when he was interviewed on CBS’s “60 Minutes” in March:

“The masks are important for someone’s who’s infected to prevent them from infecting someone else… Right now in the United States, people should not be walking around with masks. There’s no reason to be walking around with a mask. When you’re in the middle of an outbreak, wearing a mask might make people ‘feel a little better’ and it might even block a droplet but it’s not providing the perfect protection the people think that it is.”

Also questioning the effectiveness of wearing masks, the report “Masks-for-all for COVID-19 not based on sound data” was posted on the Center for Infectious Disease Research and Policy (CIDRAP) website in April. Their findings:

Yet, a huge wave of medical and scientific researchers keep coming out with calls for the public to wear masks despite the lack of clear evidence.

And while the media keeps parading the same “experts” who promote mask wearing, they virtually ignore those who provide contrary evidence suggesting they are unhealthy and ineffective.

Absent major coverage is a 2 July Wired magazine article that states, “Even now, nobody really knows exactly how much masks help, or which kind of mask is better than another.”

And when mask wearing effectiveness is questioned in the mainstream media, it’s often buried. For example, in The New York Times 8 July article, “Cases Climb, But Deaths Are Declining Across Nation,” this was buried in paragraph 14: “Experts can’t be sure, but behaviors like mask wearing, physical distancing and hygiene may also be reducing the dose of coronavirus that people encounter in the population at large.”

Note the use of the terms, “can’t be sure” and “may also be reducing” that lack scientific evidence but are promoted as though they are.

As to why so many Americans are outraged that others aren’t wearing masks everywhere, health researcher Sherri Gordon writes in her 5 June article, “How Mask Shaming Is Becoming a Public Battle”:

“A motivating factor behind mask shaming is fear. When people are scared or uncertain, they sometimes respond in aggressive ways. It’s a self-defense mechanism that serves to squash their fear and allows them to hide behind a false sense of power.”

Taking advantage of the fear around the coronavirus amped up by mainstream media, political leaders are quick to seize the moment to expand their authority. As of 10 July, 21 states have made mask wearing mandatory in public.

On 22 May, New York Governor Andrew Cuomo proclaimed, “The mask is mandatory. It’s not just a nice thing to do or civic duty. It is mandatory that you wear the mask within six feet of another person. You don’t have the right to infect another person. The mask can make a difference between life or death.”

The fear factor is working. Last week, Chief of the Texas Division of Emergency Management, W. Nim Kidd, said mask wearing needs to be expanded beyond being out in public: “The one thing I want to try to get across today is we need to do that when we’re in our homes also.”

TRENDPOST: Nations are divided between those who wear masks and those who don’t. In America, when the mainstream media reports the conflict, they sell the line that so-called health conscious, law-abiding, liberal Democrats are mask wearers and Trump-loving conservative Republicans shun them.

While there is a party division, there are also citizens who know the facts and chose not to wear a mask based on scientific findings, but this group is ignored by the media.