MORE LOCKDOWN UNREST DOWN UNDER 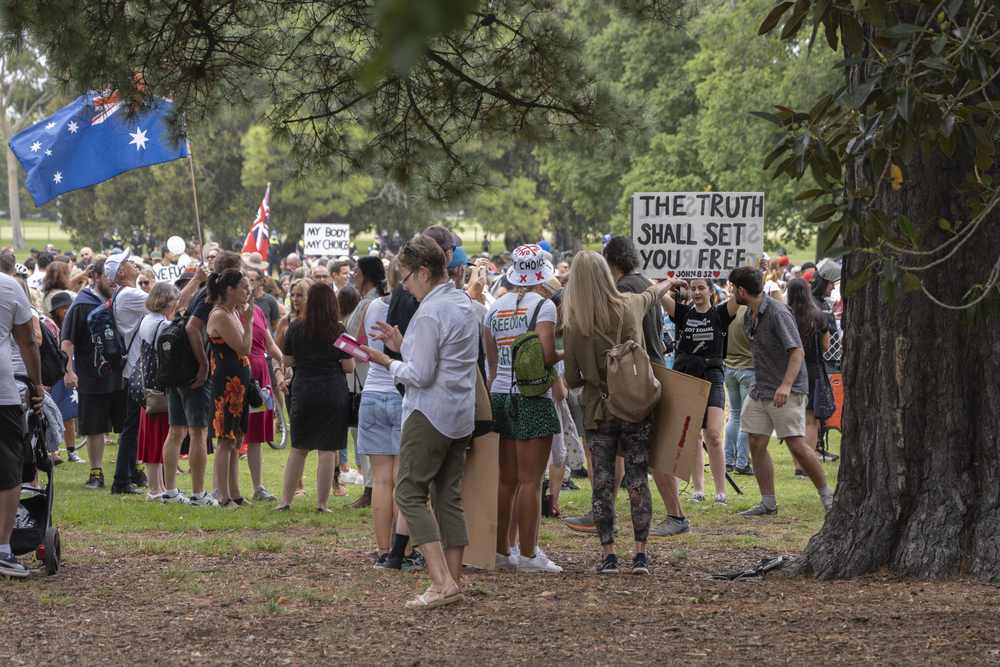 The New Daily, on 24 July, reported that "tensions were high" in Australia's New South Wales state on Saturday, as the lockdown of Sydney (its capital) and its environs began the fifth week of lockdown as COVID-19 case numbers continue to climb. And three other local government areas in NSW remain under stay-at-home orders until at least 28 July.

As the mainstream media and politicians keep pumping up COVID case numbers (while ignoring the next-to-nothing death numbers), so too, has the pushback strengthened against the government's COVID policies, as has the rhetoric of officials.

Some 3500 protesters turned out in Sydney on Saturday, shutting down the central business district; 57 persons were arrested, 90 fines were issued, and several police officers were injured at the otherwise peaceful "freedom rally."

NSW Premier Gladys Berejiklian expressed her "utter disgust" at the "illegal protesters...whose selfish actions have compromised the safety of all of us." She said the protestors had "shown utter contempt for their fellow citizens."

Track Down and Punish the Selfish Boofheads

And NSW Police Minister David Elliott directed a team of more than twenty detectives to comb through CCTV and social media footage to track down the "halfwits" and "selfish boofheads" who protested, saying he wanted to see thousands punished. ("Boofhead," meaning a stupid person or a person or animal with a large head, derives from "buffalo-head" and was the name of a cartoon character appearing in a Sydney newspaper in the 1940s.)

Elliott declared that he would be surprised if the rally didn't turn into a "super-spreader" event, saying that "decent-minded Australians have every right to be infuriated" (not at the government's affronts to their freedom, but at the protestors) and that "this selfish, inappropriate behavior is what is going to keep this city in a lockdown."

Another Big Rally in Melbourne

Also on Saturday, Melbourne, in the state of Victoria, saw its largest anti-lockdown demonstration so far; thousands gathered, chanting "Freedom!"; flares were set off outside Victoria's Parliament House, and police used pepper spray to disperse the crowd. It was apparently bigger and more disruptive than the one we reported on in our 20 July article, "AUSTRALIA: FOLKS FIGHTING AGAINST COVID WAR."

Yet, the state remains under an "extreme risk zone" designation which severely limits travel. Victorians who have traveled to NSW have difficulty returning home without a special permit or exemption.

And the state's Chief Health Officer tweeted, "We can all argue the merits...of various approaches to managing transmission, but let's not pretend that 'marching for freedom' will actually deliver the precious freedom that we all need and desire."

Euronews.com reported 24 July that a banner displayed at the Melbourne rally that day said, "This is not about a virus, it's about total government control of the people."

Prime Minister Scott Morrison announced that "we've turned the corner," and that a million doses of vaccine were being delivered each week. However, as of 23 July, only 15.4 percent of Australians 16 and older had been fully vaccinated.

TREND FORECAST: As we have long forecast the anti-vax, anti-establishment movements will continue to escalate and the COVID War 2.0 radically ramps up. It will unite factions of both left and right who believe in freedom of choice and who will resist being forced to get vaccinated.

And unlike the anti-vax movements that gained little ground before the COVID War began when only students were being forced to get a long series of jabs, now, with mandates forcing people young and old from all walks of life to be COVID vaccinated, the fight for freedom of choice will intensify across the globe.

TRENDPOST: While COVID cases in Victoria are trending down, with just 26 new cases on 22 July, 14 on 23 July, and 12 on 24 July out of a population of 6.8 million people were reported, these facts are ignored by the COVID Cops and politicians: no new deaths have been reported; the virus recovery rate is 99.6 percent; The majority of deaths have been reported in people aged 70 years and over according to the Australian government.