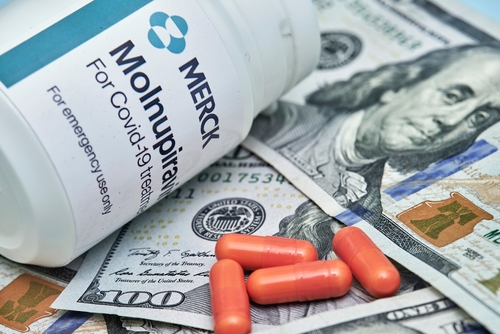 Just two weeks or so after gaining the tacit approval of the U.S. Food and Drug Administration, the very properties that enable Merck's new oral COVID-19 drug, molnupiravir, to fight the virus are fueling concerns that it may have other, deleterious effects on the body.

The New York Times reports, on 14 December, that molnupiravir operates by altering the virus's genetic code, inserting enough errors that the virus loses the ability to replicate itself.

The drug targets dividing cells, which are only a small percentage of the cells in a human adult. But it might prove as mutagenic—having the ability to cause mutations—in dividing cells like those in the bones, the intestinal lining, the cells of a fetus developing in the womb, or in male sperm cells, as it does in the cells to which COVID-19 attaches.

In an independent study using hamster cells, the drug, over 32 days, was found to induce mutations in DNA. It's feared that such mutations could cause birth defects or cancer in humans.

Merck has countered that the term of the hamster experiments was far longer than the five days or so that the drug would be administered to humans to combat COVID-19. The company said it had tested the drug on rodents and found no evidence of DNA mutagenicity.

However, the NYT article states that an infectious disease specialist at the University of Pittsburgh Medical Center noted that Merck had found that high doses of the drug in pregnant rats could cause abnormal development or death of the fetus; also, women who were pregnant or likely to become pregnant had been excluded from Merck's clinical trials.

In the U.K., health authorities have advised women who are pregnant or breastfeeding, or who may become pregnant, to avoid the drug. Members of the FDA expert committee expressed similar concerns.

Full approval from the FDA may turn on the benefits of molnupiravir in fighting COVID-19 weighed against the risks related to pregnancy, especially when pregnancy can be avoided or pregnant women not given the drug.

Meanwhile, Pfizer is expected to introduce its own COVID pill that is said to be more effective but less mutagenic than Merck's, although, in the short term, Merck's drug will be more readily available, especially during the anticipated surges in infections by the Omicron variant.

TRENDPOST: Tinkering with DNA can open up a world of medical miracles, and at the same time can be fraught with peril; see "GENE THERAPY STUDIES RAISE CONCERNS: NOT A PEEP ABOUT COVID GENE JAB" (5 Oct 2021). Also see "'BIO-PHARMA' PROFITING OFF A TRANSHUMAN FUTURE" (27 Jul 2021).