MEDVEDEV WARNS OF ARMAGEDDON AS U.S. AND NATO RAMP UP UKRAINE WAR 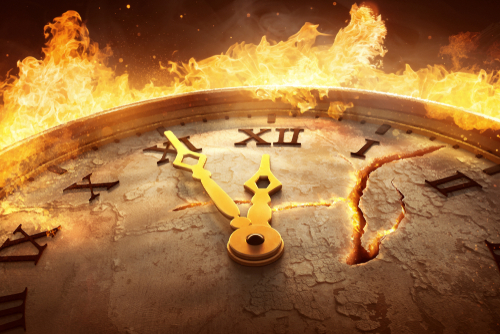 Dmitry Medvedev, deputy chairman of the Russian Security Council and the former Russian president, said in a Telegram post last week that as long as NATO continues its nearly unlimited support of Ukraine, the end result will be "everything catching fire."

He said the West is intent on weakening Russia by proxy but will not be able to continue sitting out the fight.

“Everything will catch fire around them as well,” he said, according to a translation by Ukrayinska Pravda. “Their people will be devastated. Their earth will literally burn, and concrete will melt. We, too, will suffer a lot. It will be very bad for everyone. After all, it is said: ‘By these three plagues a third of mankind was killed, by the fire and smoke and sulfur coming out of their mouths’ (Rev. 9:18).”

Medvedev said “Western nations” will no longer be able to “sit in their clean homes, laughing at how they carefully weaken Russia by proxy. Everything will be on fire around them. Their people will harvest their grief in full. The land will be on fire and the concrete will melt.”

He lambasted the “stupid think tanks” in the West that have been promoting intervention while “thoughtfully twirling a glass of wine in their hands.”

“Dull idiots with a classical education,” he said.

Since the start of the Russian invasion of Ukraine, The Trends Journal noted that the U.S., NATO and Kyiv would not negotiate for peace. Among the many others, we quoted U.S. Secretary of Defense Lloyd Austin (former board member of Raytheon, America’s second largest defense contractor) who stated, “We want to see Russia weakened.”

Our calls for peace are not because we believe the Russian invasion is justified, but based purely on pragmatism that has been missing from Ukrainian and Western statecraft, that the hotter the Ukraine War heats up, the closer the world gets to nuclear Armageddon.

Russia is the far superior power, and Russian President Vladimir Putin will not stop until his forces achieve their objective, and take over the Donbas region. Scott Ritter, a former weapons inspector for the UN who took part in Gerald Celente's OccupyPeace.com's "Freedom, Peace, and Justice" rally (WATCH), commented last week that Ukraine won a "battle," not the war. Don't tell that to the mainstream media that has, in recent days, presented the counteroffensive as though it was the Battle of Yorktown during the American Revolution.

Putin has maintained that his military has not even begun to fight, and continues to vow that, in time, Russia will achieve its goals. (See “PUTIN OVERSEES NUCLEAR DRILLS: U.S. SAYS RUSSIA CAN STRIKE AT ‘ANY TIME’” 22 Feb 2022, “PUTIN WON’T STOP IN UKRAINE UNTIL HE DECLARES ‘VICTORY’” 17 May 2022 and “PUTIN WARNS WEST, ‘WE’VE ONLY JUST BEGUN’” 12 Jul 2022.)

TRENDPOST: Anything less than pure hatred for Russian President Putin borders on treason in the U.S. media. Americans have been brainwashed since the start of the conflict that Putin is a modern-day Hitler. The only person standing in his way is Zelensky, the Churchill of our time.

Totally ignoring Bill Clinton, George Bush, and Barack Obama’s murderous track record, never is there condemnation about the wars they launched that were based on lies that have cost trillions and killed millions.

Putin correctly said last week that Western leaders, who are fueled by their hatred for Russia, would be quite content to fight Moscow until “the last Ukrainian.” Putin said the U.S. cannot imagine a non unipolar world and wants to “enforce its version of the global order.”

Also, there have been daily reports of Ukraine gaining back lost territory with headlines indicating Russia’s defeat. However, the Presstitute media never did war coverage of America’s long string of defeats in their Iraq and Afghan Wars. Instead they promoted U.S. losses as victories as with George W. Bush’s “Mission Accomplished.”

Putin admitted during the summit of the Shanghai Cooperation Organization in Samarkand, Kazakhstan, that China has concerns over the conflict, which some analysts saw as a bad omen for Moscow.

“We highly appreciate the balanced position of our Chinese friends in connection with the Ukrainian crisis,” Putin said. “We understand your questions and concerns in this regard. During today’s meeting, of course, we will explain, in detail, our position on this issue, although we have spoken about this before.”

Putin mentioned the Ukrainian counteroffensive and said, “Well, let’s see how it develops, how it ends up.” Reuters noted that he made the comment with a grin.

Putin talked about how Russian forces struck key infrastructure in the country in response to the new fighting and said if the situation “continues to develop like this, then the response will be more serious.”

He said the ultimate goal remains unchanged: "The main goal is the liberation of the entire territory of Donbas."

TRENDPOST: It is worth noting that three months after Medvedev became president of Russia (in 2008), with Putin as his prime minister, Russia went to war with Georgia. The West portrayed Medvedev as Putin’s puppet during his time in office.

Thomas Gomart, a French historian, wrote an essay for the Institut Français Des Relations Internationales, a French think tank, titled, “Russia Alone Forever? The Kremlin’s Strategic Solitude.” He noted that the war with Georgia sparked anti-American sentiments in the country and that Russia “seriously damaged its international reputation.”

“The point,” he wrote, is that the Kremlin did not care.

“Given the fact that the Bush administration has lost all moral credibility, the Russian leadership in reply to the West’s usual condemnations reciprocated and pointed [to] evidence of Western self-doubts.” he wrote.

Gerald Celente has noted that the U.S. does not have a moral high ground in this conflict due to Washington's recent war efforts in Iraq, Syria, and Afghanistan. Antony Blinken, the U.S. secretary of state, may visit injured children in Ukrainian hospitals, which is, of course, tragic, but he doesn't seem to make time to visit injured children in Gaza, Damascus, and Sana'a.