MASSIVE PROTEST IN LONDON; U.S. MEDIA LIES ABOUT THE NUMBERS 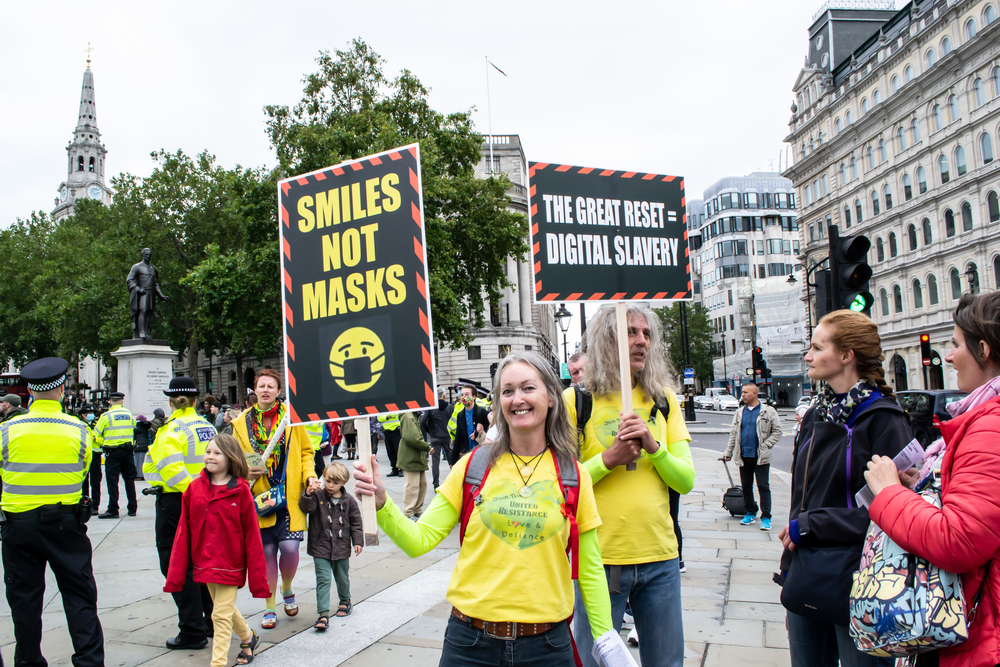 RT.com reported on Saturday’s anti-COVID War rally in London, which brought together “tens of thousands” who are “unhappy with the prolonged lockdowns imposed by the government, mistrustful of Covid-19 vaccines and harbour anti-government sentiments,” who were all brought together under the banner, “Unite for Freedom.”

Anti-vaccination sentiment pre-dates the pandemic, but it has picked up steam since COVID-19 appeared. In our 9 September 2020 article, “ANTI-VACCINATION MOVEMENT IS GROWING,” the Trends Journal forecast that such sentiment would “go mainstream” and be a part of populist political platforms worldwide.

No Masks, No Vaccines

“We are all out, normal people, not wearing any masks, not taking any vaccines, demanding that the government give us back the civil liberties that they never had the right to take away.”

The protests point out the inconsistencies of the U.K. government’s response to COVID-19, which began with restrictions that were intended to be endured for a short time in order to “flatten the curve” and keep from overwhelming the National Health Service, but instead have gone on and on.

Now officials are saying that the appearance in the U.K. of a COVID-19 variant, first seen in India, may further delay the easing of restrictions.

The marchers also vociferously oppose the notion of vaccine passports.

The New York Times (the self-proclaimed “Paper of Record”) and NBC news were among two U.S. media outlets that posted videos of the London rally.

The Times the headline read:

Hundreds? As per the video, it is abundantly clear to anyone that “hundreds” was an outright lie; hundreds of thousands or “about a million” were in attendance... as some have claimed. (Watch the videos: NYTs’ here; NBC’s here.)

TRENDPOST: It is hypocritical that Washington and the Presstitute media continually attack all things Russian, including RT.com, while they sell lies, such as the Korean, Vietnam, Afghan, Iraq, Libya, Syria, Yemen... and COVID Wars, while banning opposing views.