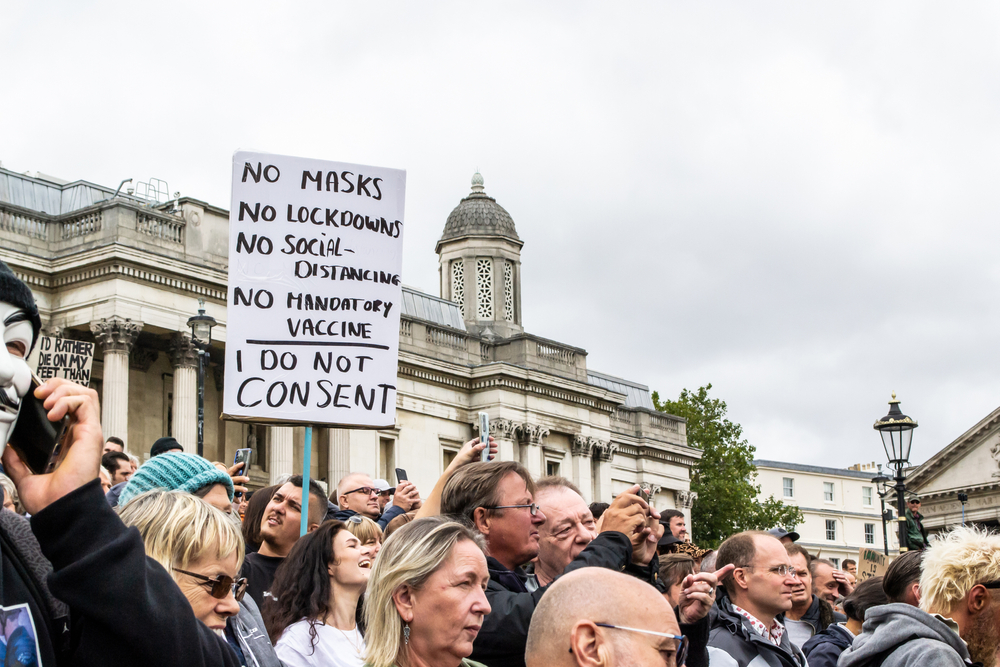 Health care workers joined anti-vaxx protesters in London on Saturday to voice their opposition to mandatory vaccination rules requiring them to take a jab in order to keep their jobs.

The Daily Mail reported that the protests were chaotic and dozens of health workers were seen throwing their scrubs at police officers who were stationed outside Downing Street. More than 80,000 NHS staff remain unvaccinated, contributing to the more than four million in the U.K. who have not taken their first jab.

The Royal College of GPs said last week that the country should delay the mandate in order to prevent a worker shortage. Sky News reported that the government wants frontline employees to be fully vaccinated by 1 April, which would mean they roll up their sleeves for their first shot by 3 February.

One demonstrator was photographed holding up her blue scrubs with black writing, “There’s no price for freedom. We will not negotiate and we will not comply. That does not make us anti-vaxx or anti-COVID war…There must be a choice.”

Conservative MPs have called on Prime Minister Boris Johnson to consider new plans when it comes to making vaccines mandatory for these workers.

Johnson, who has been bruised by scandals of boozy parties during lockdowns, said these workers have a “professional responsibility” to take the vaccine. (See “EMBATTLED BORIS JOHNSON AIMS TO LIFT U.K.’S SELF-ISOLATING LAW,” “COVID WAR CRACKDOWNS AND PROTESTS” and “U.K., FU: COVID RULES FOR THEE, BUT NOT FOR ME.”)

Other protests broke out in Leeds, Newcastle, Manchester, and Birmingham. These workers remembered a time they were praised for their heroism in the face of a deadly, mysterious illness, but now feel they are being abandoned by the government.

Some of the signs read: “No vaccine mandate,” and “heroes to zeros.” Some of the frontline workers said the vaccines are experimental drugs.

“People were once clapping for us but there's no appreciation anymore,” Christabelle Gregory, 32, an ambulance worker who was protesting in London, told the paper. “I’m young and I've got antibodies from working on the frontline, so I don't want the vaccine.”

A 36-year-old emergency care assistant had similar concerns expressed by Gregory. She said that she is about to lose her job that she loves because she doesn’t want to take the jab.

“It’s too new and we don’t know enough about it,” she said.

TREND FORECAST: As the global economy continues to decline, desperate to boost economies and bring in more tax revenue, many nations will lift vax mandates. And as for the protests, we continue to note, unless they are constant and peacefully disruptive, they will do nothing to reverse government mandates, laws and actions.