MASKS ON A PLANE = MASS STUPIDITY 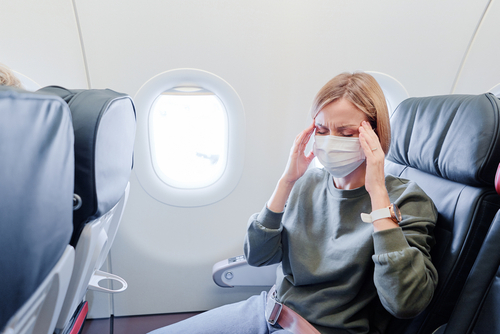 Remember boys and girls and children of all ages, when on an airplane, it is OK to take your mask off when eating and drinking. But put it on between bites and sips because that’s when the COVID will slide down your throat and kill you!

As Gerald Celente noted when the COVID War began and mandates were being imposed on populations: “They’re making this shit up.”

Depending on what country you are from, there are different mask wearing rules on airplanes.

On 28 September, The Washington Post reported on the myriad rules pertaining to mask requirements for airplane travelers, especially children.

Under the U.S. Transportation Security Administration's mandate, effective through January, everyone 2 yrs. old and older must wear a face covering in airports, planes, trains and other forms of public transport.

But, shoving out their own made-up bullshit rules, Air France requires masks of everyone 6 and older.

To further illustrate the arrogance and stupidity of their making this crap up, Lufthansa requires masks of those 11 or older. But the U.S. rule takes precedence over others, so foreign travelers to the U.S. need to be prepared to comply.

The federal mask mandate does provide for exemptions for "certain disabilities," but the CDC says that conditions that make mask-wearing only "difficult," such as, for example, asthma, do not necessarily qualify.

And each airline has its own set of grounds and procedures for requesting an exemption. Delta, for example, puts passengers through a "Clearance-to-Fly" process that can take more than an hour; American Airlines requires medical documentation submitted 72 hours before takeoff; Southwest requires a doctor's note a week in advance; and JetBlue, while requiring exemption requests "well in advance," says that it's a "very rare case" in which a traveler manages to qualify.

Anyone who refuses to wear a mask on a plane—children included—may be prohibited from flying, now and in the future; such persons may be removed from the aircraft and may incur federal penalties.

The airlines claim their crew members strive to be flexible when dealing with families with small children, but entire families have been forced to deplane over a small child refusing to wear a mask or just being unable to keep it on.

TREND FORECAST: Why are children being forced to wear masks and get vaccinated? As noted in this week’s article, “VAX KIDS? MORE DROWNED IN THE U.S. THEN DIED OF COVID.”

Between May 2020 and 23 September 2021, the grand total of 498 children died of the virus in America. And as we have reported, the majority had preexisting comorbidities and/or were overweight or obese.

TREND FORECAST: Mandates beyond mask wearing will be enforced across the globe on air travel and beyond... affecting all aspects of life.

On Sunday, Air New Zealand announced it will require international passengers to be fully vaccinated. The airline's CEO Greg Foran said, "Being vaccinated against COVID-19 is the new reality of international travel.”

Anyone flying into Canada must be fully vaxxed and the French government allows “Vaxxed Only” on domestic air, long-distance train, and on busses.

TRENDPOST: To further illustrate the New World Order fascist dictates, The Washington Post article includes propaganda tips on how to train and motivate children to comply with the mask rules, and even advocates practice sessions a month or two before a trip; even at 18 mos., we are told, children can "start to practice."

Even though the current TSA mandate is effective only through January, don't expect mask requirements to go away; see "THE NEW ABNORMAL: MASKED FOR LIFE" (25 May 2021).

TRENDPOST: And as we have noted, TSA lunacy rules say the masks may be removed for eating, drinking and taking medication, but only briefly, and replaced after each bite or sip. Why? Obviously, in the New Abnormal world of lost freedom and intelligence... the virus will not enter one’s mouth between sips and bites!

Airline employees, from ticket agents to flight crews, must remind travelers of the rules. And not just any face covering will do. Bandannas, scarves, balaclavas and even masks with valves are prohibited; see "SADOMASKISM: THE INHUMAN WAY" (7 Jul 2020).