MAJORITY OF AMERICANS WOULD QUIT THEIR JOBS THAN TAKE THE JAB. WILL THEY BACK DOWN? 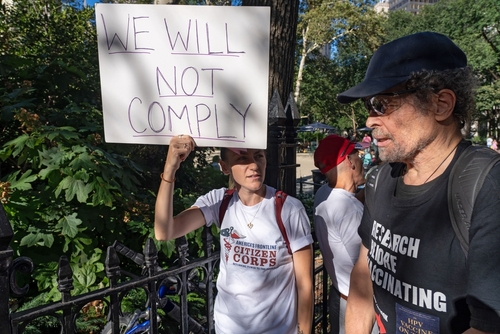 A Washington Post/ABC News poll released earlier this month found that nearly 70 percent of unvaccinated Americans would rather quit their jobs than submit to mandatory COVID-19 jabs.

The poll raises the possibility that the Biden administration will face serious challenges enforcing its vaccine mandate that zeroes in on private-sector jobs and could affect up to 100 million Americans.

As we reported, on Thursday Biden announced an unprecedented new order that would force any employer with over 100 workers to either mandate vaccines or offer weekly testing.

“My message to unvaccinated Americans is this: what more is there to wait for? What more do you need to see? We have made vaccinations free, safe, and convenient. The vaccine is FDA approved. Over 200 million Americans have gotten at least one shot. We have been patient, but our patience is wearing thin, and the refusal has cost all of us.”

Biden also signed an executive order that is even more severe than the mandate for private-sector jobs. For federal employees and contractors, there is no option to be tested weekly. All 17 million health care workers at facilities that receive money from federal programs like Medicare and Medicaid must be vaccinated. And, Biden also mandated vaccinations for about 300,000 educators in the federal Head Start program and more than 200 federally run schools.

Biden reiterated that the country is facing a “tough stretch and it could last for a while.”

The Trends Journal has reported extensively on Biden’s effort to force Americans to take the jab. (See “NO VAX, NO JOB, NO FUTURE: BIDEN KNOWS BEST”)

RT pointed out that "experts" have been debating whether or not such a mandate from the federal government is legal and pointed to an op-ed in The Times written by two top attorneys at the American Civil Liberties Union. They gave the move their blessings and argued that “vaccine mandates actually further civil liberties.”

“Vaccines are a justifiable intrusion on autonomy and bodily integrity. That may sound ominous, because we all have the fundamental right to bodily integrity and to make our own healthcare decisions. But these rights are not absolute,” they wrote. “They do not include the right to inflict harm on others.”

“To date we have relied on a volunteer army. But particularly with the Delta variant, the enemy has been reinforced, and now a volunteer army is not sufficient. We need to institute a draft,” he told The Times.

Indeed, what “draft” was the jerk talking about that “We need to institute,” the Vietnam War draft; the Korean War draft?

Proud of Biden’s actions, his chief of staff, Ron Klain retweeted a post that said the Biden administration managed to pull off the “ultimate work-around” for a national COVID-19 vaccine requirement.

TRENDPOST: Before President Biden imposed his latest round of his “Get vaxxed or get lost” COVID mandates, he was being chastised in the media, across the nation, and around the world for his disastrous Afghan War withdrawal.

But now that he has imposed his Imperial Powers upon the citizens of Slavelandia to get vaxxed and do what they are told, the media and the mass majority are supporting his mandates.

The New York Times pointed out that there will almost certainly be legal challenges to the mandate. Montana has already banned employers from mandating vaccinations for their staff, and South Dakota Gov. Kristi Noem tweeted, “My legal team is standing by ready to file our lawsuit the minute @JoeBiden files his unconstitutional rule. This gross example of federal intrusion will not stand.”

Guy T. Williams, the chief executive of Gulf Coast Bank & Trust, which is based in Louisiana and employs about 775 people, asked The Wall Street Journal: “Does the president of the United States get to dictate vaccinations?”

The Times said lawyers insist that Biden has the authority to impose these mandates as long as he works through OSHA.

TRENDPOST: The New York Times pointed out that about 53 percent of the country is fully vaccinated. Despite over half the population being vaccinated, the country had a daily average caseload of over 150,000 for the first time since January, killing about 1,500 per day, the report said. What they did not say was that there were well over 250,000 cases per day and over 4,000 deaths per day back in January. Yet, the media keeps hyping the current numbers as if they are astronomical... and the masses buy them.

TRENDPOST: Biden is seen as going further than any past American president to force vaccinations and he is basing his effort on protecting “vaccinated workers from the unvaccinated,” which naturally raises the question of the vaccines’ effectiveness.

Again, unquestioned by the media is the illogic of the President’s and others claim that the unvaccinated are threatening the vaccinated. Thus, if a person is vaccinated they are supposedly safe from catching the virus. So how can the unvaccinated give them the virus?

TRENDPOST: The Trends Journal ran an article in July titled, “U.S. VAX RATE DOWN, BIDEN FIGHTING TO PUSH IT UP,” on President Biden falling well short in his effort to have 70 percent of Americans have at least one shot by the Fourth of July.

His look to destroy careers in the private sector to increase the number is troubling, but not a surprise. Dr. Jonathan Reiner, a CNN medical analyst, a few weeks ago, said it is time the private sector takes the lead on the effort. He said private companies should begin to require workers to take the jab.

“Seventy-five million adults have chosen to not get vaccinated and that choice has consequences,” Reiner said. “Now, we can't force you to take a jab in the arm but there are many jobs, perhaps, that can prevent you from working if you decide not to get vaccinated.”

The fact that the Biden administration had to resort to this mandate is stunning since its corporate media arm has been wall-to-wall with its positive coverage of vaccinations. Biden also keeps getting away with the flat-out lie that the vaccines are “free.” We the People of Slavelandia are heavily taxed and billions of our tax dollars were paid to the drug lords who are dispensing the jab.

The interesting question is what happens if the 70 percent in the aforementioned poll simply tell their employers, many who can’t find employees now, that they will quit rather than get jabbed ? What is the next step in vaccine mandates?

Lawrence O. Gostin, the Georgetown University law professor, told The New York Times that Biden cannot require all Americans to take the jab because vaccinations are “the province of the states.” But there are bully tactics that the White House can deploy like funding for states and blueprints on how states can produce “vaccine passports.”

Biden said if these governors don’t help, he’ll use his power to “get them out of the way.”

This will be a major campaign issue in upcoming elections and we maintain our forecast that new anti-vax/anti-tax/anti-establishment political movements will be formed.