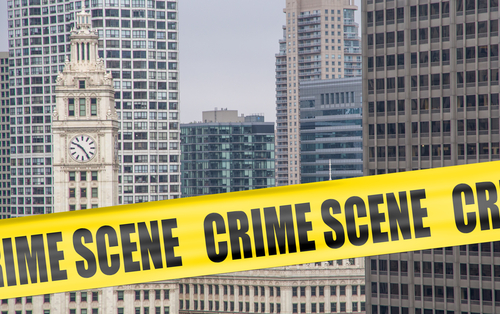 The number of murders in some of the largest cities in the U.S. continued to rise in 2021 while the COVID-19 outbreak continues to rage throughout the country.

The cities that reached a record high in killings included Philadelphia, Portland, Ore., Louisville, Ky., and Albuquerque, N.M., according to The Wall Street Journal. The paper, citing a study by the Council on Criminal Justice, reported that homicide rates in 22 of the largest cities through the third quarter of 2021 jumped 4 percent.

The deadly year followed 2020, which was also considered one of the most violent years in decades, according to the Journal.

Chicago recorded 836 murders in 2021, which is one of its deadliest years in “at least the last quarter-century,” police told The Chicago Tribune. The city’s medical examiner told the paper that blacks were the victims of 80 percent of the homicides the office handled.

New York City recorded 485 killings in the year, which was a 4 percent jump from 2020, The New York Post reported.

Police in Portland, Ore., responded to 90 homicides across the city in 2021, which eclipsed its previous record of 66 in 1987, according to KOIN.

There has been a debate within these cities about what is playing the biggest factor in the increase. Many point to the COVID-19 outbreak and the psychological stress the pandemic has on many Americans, while others blame new policing tactics. Portland, for example, disbanded its Gun Violence Reduction Team in 2020.

“Crime has risen everywhere, but here, it’s been at historic levels,” Lt. Nathan Sheppard with the Portland Police Bureau told the station. “I’d be remiss if I didn’t say there were some clear consequences to getting rid of our team that addressed gun violence.”

TREND FORECAST: As Gerald Celente has long noted, “When people lose everything and have nothing left to lose, they lose it.”

Again, when politicians launched the COVID War some two years ago, we warned the worst is not only yet to come, it will become a way of life. Gangs will grow in power as well. Expect thefts, robberies, and violent crimes all to increase now and when the shut-ins end.

The extent of the damage caused by the coronavirus is not yet known, but the Trends Journal has warned that the subsequent lockdowns would lead to an epidemic of despair among the young and old. Knowing at the onset of the COVID War last February that crime would dramatically escalate, we added our “Survivalism” column as an essential element of the Trends Journal.

This magazine said in March that when politicians lock down economies to fight the COVID WAR, an increase in crime is nearly certain. (SEE: “CRIME ON THE RISE DURING THE GREAT LOCKDOWN.”)