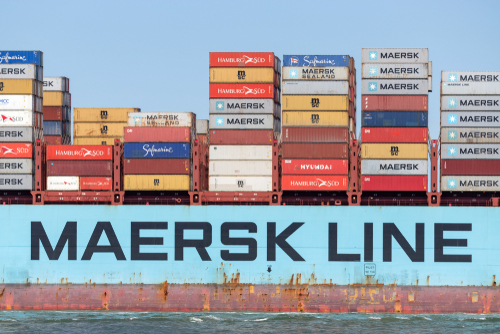 AP Moller-Maersk, the world’s most profitable shipping line, became even more profitable in this year’s first quarter, booking $19.3 billion in revenue for the period, up 55 percent from 2022’s first three months.

The company netted $6.8 billion in profits, more than double the previous quarter’s.

However, “we are assuming a slowdown in the second half” of this year, CEO Soren Skou said in a statement announcing the results.

“Mainly, we see risks building up in the economy, in China with the COVID-19 policy, these very hard lockdowns,” he added, and “some downgrades due to a very high oil price.” He downplayed forecasts of a U.S. recession this year.

“I don’t think [inflation] is temporary,” Skou said. “There are a number of factors that suggest we will see less growth in the second half and into next year.”

Maersk was seeing its shipping volumes fall due to China’s six weeks of lockdowns, including in key industrial and shipping locales.

Still, the company has hiked its expectations of net profits this year to $24 billion from February’s forecast of $19 billion.

TREND FORECAST: As we have noted, a global slow in shipping has begun and what Maersk is reporting is significant.

Indeed, the six week round of draconian Chinese lockdowns have choked supply chains and rising inflation and weakening economies have dampened consumer spending in Europe and the U.S. which has slumped Chinese export growth.  After increasing some 15 per cent in March, exports increased just 3.9 per cent in April from a year earlier—the slowest rate since the COVID War began in 2020.

And with export growth the dynamo that drove the Chinese economy up over the last two years, now diving, it will be a key damaging factor to its economy as well as to both imports and exports which will bring down shipping revenues.