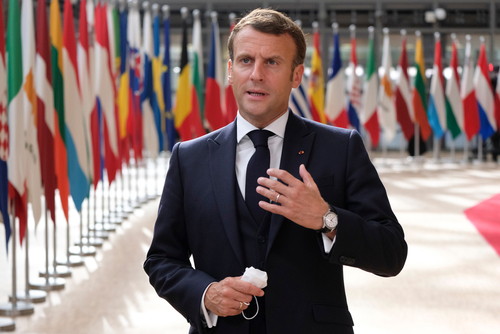 French President Emmanuel Macron on Wednesday tried his best to sell the public on why French troops should be sent to Romania while Russia carries out its invasion of Ukraine.

Macron called Russia’s invasion “brutal” and warned citizens that the challenges will likely only increase as the war unfolds. WSWS.org accused Macron of attempting to lie about Russian motivations to invade.

The report said 70 percent of the French population is opposed to joining the conflict and Macron has laid the blame squarely on Russian President Vladimir Putin. The report said Moscow is responsible for carrying out the invasion, but NATO has “systematically worked to threaten Russia and cut off negotiations with it, goading Putin to take military action.”

Macron was seen as Europe’s top negotiator with Putin before the war. He has an election coming up in April and would have been able to celebrate scoring a major diplomatic win if Putin agreed to scale down his forces. The report said Macron clearly “failed” in that effort.

Macron spoke with Putin for two hours on Sunday to get Russia to stop the conflict and to protect nuclear sites in Ukraine. Despite the Western media’s attempt to describe Russia’s military in a state of disarray, Putin said that the campaign was going as planned and the onslaught will continue until Ukrainians stop resisting.

The WSWS report accused Macron of lying about NATO’s presence in Ukraine and said the French leader was less than straightforward when he described the West’s role in the lead up to the Ukraine invasion.

“In February 2014, the NATO Powers backed a putsch, led by neo-Nazis of the Right Sector group, that installed a pro-NATO government in Ukraine. Since then, CIA advisers and U.S. mercenaries from the private firm Academi (formerly Blackwater) have helped Ukrainian forces carry out attacks on Russian-speaking areas of Ukraine,” the report said.

Macron followed U.S. President Joe Biden’s lead and warned citizens that there will be economic pain caused by the Russian invasion and subsequent sanctions.

“Our economic growth, currently high, will inevitably be affected,” he said. “Rising prices for oil, gas, and raw materials will impact our purchasing power. Tomorrow, filling up your tank, heating your home, the cost of key products will likely rise even further.”

Macron announced on Thursday that he will run for a second term.

“We have not achieved everything we set out to do. There are choices that, with the experience I have gained from you, I would probably make differently,” he said.

Expected to win April’s election, Macron, benefiting from the Ukraine conflict, saw his poll numbers move up from about 24 percent to 27 percent, further pulling ahead of his chief opponent Marine Le Pen, who has been polling at around 17 percent.

“Rarely has France been confronted with such an accumulation of crises,” he wrote in French newspapers. “I am a candidate to defend our values that are threatened by the disruptions of the world.”

TRENDPOST: Lining up with other politicians whose poll ratings have gone down for ruthlessly fighting the COVID War, Macron’s Ukraine war talk has helped distance himself from his mandates, lockdowns, and foreign policy failures in Africa. As the Ukraine War continues, Western politicians will continue to trumpet their anti-Russian sentiments, winning over large segments of the population who have obediently joined the Cold War 2.0.