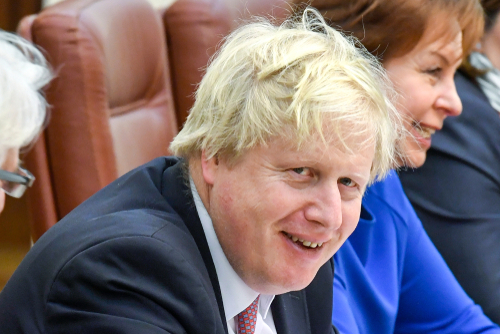 London’s Metropolitan Police announced last week that it ended its investigation into parties that were thrown at government buildings, including 10 Downing, while much of the U.K. was under strict COVID-19 lockdowns and residents barred from socializing outside of their homes.

Law enforcement said British Prime Minister Boris Johnson will not face any further penalties over the eight boozy social gatherings in and around Downing Street and Whitehall,” The New York Times reported.

Johnson's attendance at some of these events were seen by critics as the height of government hypocrisy during these lockdowns. Johnson looked particularly bad because reports about these parties emerged at about the same time as a government official was seen on video mocking the orders.

Jill Rutter, a former civil servant who is now a senior research fellow, told The New York Times that she was not sure how Johnson was essentially exonerated while others people who attended were fined.

“There will be some questions about that,” she said.

Johnson somehow managed to survive the controversy that could have been career-ending. He apologized last month and admitted that he attended a “bring your own booze” party. There have been a total of 126 fines doled out to 83 individuals.

WSWS.org reported that only two top government figures, Johnson and Chancellor Rishi Sunak, had to pay one £50 penalty.

The report said his fine was tied to Johnson's decision to attend his own surprise birthday party in June 2020. The report added that he was present at other parties, but was not fined for those. (See “UK, FU: COVID RULES FOR THEE BUT NOT FOR ME,” “EMBATTLED BORIS JOHNSON AIMS TO LIFT UK'S SELF-ISOLATING LAW” and “BAD BOY BORIS GOES LETHAL.”)

The Trends Journal has pointed out in previous reports that Johnson seemed intent on changing the subject during the height of the controversy. He eased COVID-19 restrictions and then latched on to the Ukraine War as his top priority.

Johnson told his cabinet that he would like to begin providing Kyiv with “more lethal” firepower in its fight against the Russian invasion. In an instant, criticism for his behavior was overshadowed by his new role playing the mastermind in the fight against Russia.

Sir Keir Starmer, the Labour leader, was not convinced. He accused Johnson of lying about his “industrial-scale partying” during the lockdowns, but now he faces criticism for joining a beer-and-Indian-food gathering with members of his party, the Times said. Starmer said he will quit if given a fine by Durham police for breaking these rules.

Chris Philp, the culture minister, accused Starmer of attempting to "pressure the police into clearing him," the report said. He called that alleged effort "deeply inappropriate."

The Times said Starmer’s comment on resigning if fined by police was a direct swipe at Johnson who did the opposite. He said he would not leave even if fined.

Sue Gray, a British civil servant, is expected to release her own report this week. The BBC reported that an interim version of her report was published in January and criticized "failures of leadership and judgment." The report said some of the parties should not have been allowed.

"The [prime minister] has always said that Sue Gray can take the report to wherever the evidence takes her,” Nadhim Zahawi, the education secretary, told the BBC. “The prime minister will not interfere or intervene in the report. Sue Gray... is professional and has the highest level of integrity. She is independent."

There have been allegations that Johnson tried to 'nobble' Gray’s official inquiry, The Daily Mail reported.

TRENDPOST: It is a freak show in front of everyone’s eyes. Those who get caught lying come up with the line that they “apologize.” There is no true apology. The only thing they are sorry about is that they got caught.