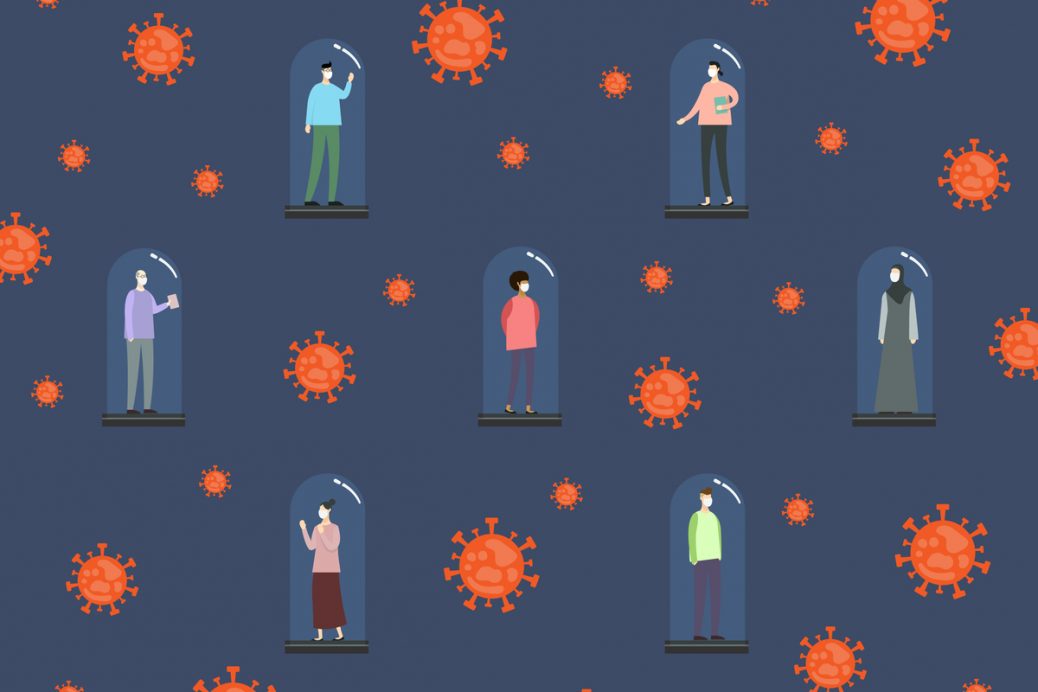 As Trends Journal subscribers well know, we have been saying for nearly two years that the lockdowns and draconian mandates imposed by politicians across the globe lacked a scintilla of evidence.

Remember the bullshit of wiping down boxes and grocery bags before you brought them into your home because the “COVID WILL GET YOU”?

Totally useless: The odds of getting it from a surface are less than one in 10 thousand.

Remember the bullshit of having to stand behind Plexiglass dividers to stop the COVID going from you to the cashier?

Totally useless: The variant goes under and over the open sides and back of the Plexiglas, but yet they are still standing tall in a store near you.

Remember the 1 meter, 2 meter, 3 meter social distancing lines the freaks in control made up, whether it was indoors or out, that people must obey so they would not spread the coronavirus?

Totally made-up. As data shows, a sneeze or cough could travel as much as 27 feet.

Look at how people were made to wear masks outdoors and/or wearing them because they feel safe when the odds of catching the virus outdoors, according to “science,” is less than one percent.

Remember the maniacal politicians imposed “shelter-in-place” mandates, forcing people to stay in their homes, closed down playgrounds and banned going to the beach?

The curve was never flattened, only the lives, hearts, souls and livelihoods of millions were “flattened.”

All made-up COVID bullshit mandates we have detailed over the years. Here is just one of the many articles. (See “MAKE IT UP, THEY WILL BELIEVE IT,” 23 Jun 2020)

The lockdowns were lunacy.  Now it is “official,” but the mainstream media has ignored it.

Yes, the lockdowns imposed upon people across the globe to stop the spread of the coronavirus were useless. In fact, go back to the arrogant “Daddy’s Boy”, little Andy Cuomo—who like Justin Trudeau, George W. Bush and many of the rest of the ruling gang, would be nobodies if Daddy didn’t get them there—admitted at the height of his lockdowns of New York State, that 66 percent of the people hospitalized with COVID were people who were locked in their homes.

Almost totally ignored by the mainstream media, economists at Johns Hopkins University researched meta-analysis of multiple studies and said they found that the lockdowns during the first COVID-19 wave in the U.S. and Europe only reduced mortality by 0.2 percent.

Repeating what we had detailed for nearly two years, the study’s abstract concluded:

“While this meta-analysis concludes that lockdowns have had little to no public health effects, they have imposed enormous economic and social costs where they have been adopted. In consequence, lockdown policies are ill-founded and should be rejected as a pandemic policy instrument.”

The authors of the working paper looked at 24 separate studies and then grouped them as lockdown, shelter-in-place, and specific non-pharmaceutical intervention studies, and determined that lockdowns had “little to no effect on COVID-19 mortality.”

Shelter-In-Place orders only reduced deaths by an average of 2.9 percent, the report said. The university made it clear that the views in the report were held by the authors—who were economists—not the school’s.

The Trends Journal has reported since the start of the outbreak that lockdowns were not based on science and did more harm than good.

The authors from Johns Hopkins theorized that the lockdown measures may have worsened the outbreak because people were stuck at home—where the rate of transmission is at its highest.

“Job losses in March and April 2020 exceeded 22 million and have not yet been fully recovered. Children lost years of educational and social development that will affect them for the rest of their lives. Psychological problems have soared throughout society. It’s hard to disagree with the Hopkins researchers’ conclusion that lockdowns ‘should be rejected as a pandemic policy instrument.’”

Fox News pointed out that the Johns Hopkins study was not mentioned on CNN, MSNBC, ABC, CBS, and NBC. It wasn't just the networks avoiding the study, Fox reported. The New York Times, The Washington Post, The Associated Press, Reuters, USA Today, Axios, Politico among other outlets that avoided the topic, Fox reported, citing search results.

But some skeptics spoke out against the study that they say was misrepresented in some news outlets as though it spoke for the university, which it did not. These critics also pointed out that the authors were economists and not epidemiologists or in the medical field.

TREND FORECAST: As we have forecast since the outbreak of the COVID War, anti-vax, anti-lockdown, anti-tax, anti-immigration, anti-establishment political parties will be strong forces now and in the future.

The Canadian trucker’s Freedom Convoy which is being vilified by the mainstream media who have been the main spreaders of COVID Fear and Hysteria and attacked by the politicians who launched the COVID War, is a prime example of people power now emerging.

TRENDPOST: Each country’s politicians impose Executive Orders on how far social distancing should distance, how many people can gather, under what exceptions they can leave their homes, how long they can stay out, how far from their homes they are allowed to roam, and what businesses are essential… without providing scientific justification and/or quantitative analysis to support their orders.

There is never a mention in the media or questions as to the validity of these government mandates and/or the consequences of these actions.