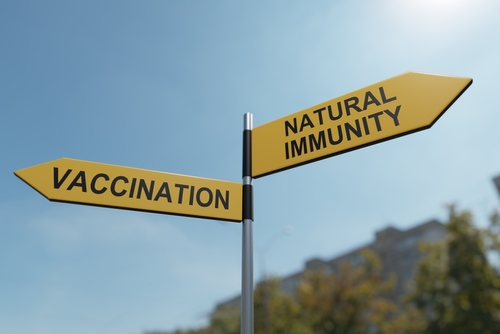 Americans who were considered to be “fully vaccinated” after receiving their first two jabs of the COVID-19 vaccine and later came down with the virus, have expressed confusion as to when—if ever—they should sign up for a booster shot.

“There’s no reason to rush out and get that booster dose if you've had a recent illness with COVID,” Buddy Creech, an infectious disease specialist at Vanderbilt University Medical Center, told The Wall Street Journal. “You’ve got a period of at least 8 to 12 weeks when you're going to be highly protected.”

David Dowdy, an epidemiologist at the Johns Hopkins Bloomberg School of Public Health, also told the paper that getting a booster shot too soon after infection could lead to the immune system failing to identify the vaccine from the previous infection. He also said that waiting could help the body further recover and lessen the chance of a side effect from the vaccine.

The paper reported that the federal government has left a lot to be desired when it comes to explaining its guidance to the general population, as the number of COVID-19 deaths in the country approaches 900,000.

The Centers for Disease Control and Prevention released data that showed that there were more than three times as many breakthrough infections in December—while Omicron was spreading—compared to August, when Delta was the dominant strain.

The CDC is reportedly aiming to readjust its messaging after claims that the agency has lost its footing when it comes to directing the public’s response to the outbreak. The Journal reported that one of the agency's first priorities is to improve its data collection effort “that has hobbled decision making” and to clear up its messaging.

The paper itemized some of the early missteps that the CDC had at the onset of the virus, including its backing of faulty COVID-19 tests “that put the U.S. months behind in instituting a proper surveillance system” and recently, the agency has appeared unclear on its self-isolation recommendation after being diagnosed with the Omicron variant.

The report, citing a survey by the Annenberg Public Policy Center of the University of Pennsylvania, said public trust in the CDC fell to 72 percent in January. In November, 77 percent of the country had faith in the agency, the report said.

TRENDPOST: “Experts” told the paper that the obfuscation could be tied to the “limited scientific data” that is out there on boosters. Yes, “limited scientific data,” yet, we the people across the globe are being forced to be injected with the Operation Warp Speed mRNA jab.  (See “BIDEN BOOSTER PLAN: VAX YOU!”  “SELLING BOOSTER SHOTS, CDC’S WALENSKY SAYS ‘FU’ TO AGENCY ADVISERS,” “THE VAX/BOOSTER MARKET: DRUG DEALER ON PARADE” and “VAX EFFECTIVENESS WANES EQUALLY FOR OLD AND YOUNG: 4TH JAB COMING.”)

The Trends Journal has long reported on the data that has questioned the efficacy of the COVID-19 vaccines, mask mandates, social-distancing guidelines, Plexiglas dividers, washing down surfaces, and devastating lockdowns because we knew that these important decisions were not science or data-based, but rather based on politics.

In the race for the White House in 2020, Joe Biden and his running mate Kamala Harris’ had the keen ability to make the former president appear even more ill-informed and more cavalier than most Americans already thought. As we reported in 29 September 2020 Trends Journal:

“Americans seem to have reservations about being first in line for any approved vaccination for COVID-19, according to a recent Axios-Ipsos poll.

“The poll showed only 13 percent of Americans would be willing to take the vaccine upon rollout. Joe Biden and his running mate, Senator Kamala Harris, have raised suspicions about the reliability of any vaccine rolled out before the election.”

Biden went to say, “I trust vaccines,” he said. “I trust the scientists, but I don’t trust Donald Trump,” and his running mate Harris said she would not trust a vaccine the Trump administration was selling.

Yet, this is the same vax they have been imposing upon the American public and there is no outrage. In fact we had forecast back then that from nations’ capitals across the globe to Wall Street, the word is that until a COVID vaccine is made available to the public, there will be no strong economic rebound.

Therefore, the faster the vaccine hits the Main Street, we forecast resistance to get vaccinated will decrease as the major media and politicians promote getting vaccinated as the only way to win the COVID War, with virtually no mention of building up one’s immune system and getting healthy.

Governments will impose educational and other restrictions on all those who refuse to get vaccinated, just as they have done in many states and nations prior to the coronavirus. (See “HAVE THE ARCHITECTS OF THE COVID-19 PANDEMIC LOST TOUCH WITH REALITY?” and “COVID-19 VACCINES ARE A GLOBAL SCIENCE EXPERIMENT.”)

What the WSJ ignored in the lead of their story, we have been reporting for months: These first ever injected into a human body mRNA vaccines were rushed along under Operation Warp Speed and—despite assurances—were never tested on a large scale or long term.

Now the scale has reached a level that it will be impossible to discern what kind of future health maladies could be blamed on these shots.

The Journal reported, “Some CDC stumbles are understandable, people inside and outside the agency say. The CDC has been forced to make decisions—and explain them—based on limited knowledge in a fast-moving pandemic.”

That does not instill confidence that the government is making an informed decision based on reliable and clear data.

The report pointed out that President Biden admitted that the messaging has been confusing because the scientists themselves are in the process of learning about this virus. So the policy in Washington seems to be: Lockdown first, ask questions later.

TREND FORECAST: We still hear nothing from political leaders, their health “experts,” or mainstream media about the most natural, self-controlling safety feature against any virus: Keeping one’s immune system strong through healthy eating, exercise, and activities that bring joy and beauty into one’s life.

Moreover, the vaccines were promoted by politicians and the media as a passport to COVID Freedom, meaning if you got the vaccination, you were safe from catching the virus.

But that is no longer the message, meaning, as with the flu vaccine, there will be ongoing pressure each year to get re-vaccinated.

Also minus in their reporting of fighting the COVID War, is that those with pre-existing comorbidities who are most susceptible to getting the virus must be protected, rather than politicians forcing their draconian mandates on the general public.