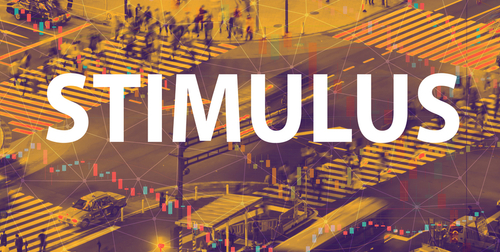 Japan’s government will send a check for ¥100,000, about $872, to every household in the country with children under 18 years of age and give the equivalent of $22,000 to every small business that can show it has been adversely affected by the COVID era’s economic chaos.

Households without children will receive no payment.

The size of Japan’s latest stimulus is almost twice the size that analysts had expected earlier this month and totals about a tenth of the country’s GDP, The Wall Street Journal noted.

The gifts are the government’s latest attempt to stir a sluggish economy that has yet to shake off the COVID era’s shutdown and that has resisted previous stimulus measures totaling ¥88 trillion, or roughly $770 billion, about 17 percent of the country’s GDP.

Japan’s economy contracted 3 percent in this year’s third quarter, its second contraction in three of the latest quarters, because of global supply chain chaos, putting the country on track with our prediction of a 3-percent GDP expansion for Japan for 2021 overall

Japan’s economy has yet to regain its pre-COVID output levels, while China and the U.S. already have surpassed them.

In May, the government sent a check for ¥100,000 to every citizen. Studies show that 70 percent of the money wound up in savings accounts instead of being spent as it was intended to be.

There are few signs that yet another squirt of stimulus will revive Japan’s economy, according to the Financial Times, or kindle inflation, which now languishes at less than 1 percent.

“Even if 30 percent of the [money] distributed to households with children is spent this time, it won’t do much to boost consumption,” researcher Akihito Morishige at Mitsubishi Research Institute told the FT.

Sending money to people and businesses also neglects nagging structural issues endemic in the economy, such as poor productivity, other analysts pointed out to the FT.

Also of concern: the debt Japan is already carrying, which totals the equivalent of about $11 trillion, more than 200 percent of 2019’s GDP.

Japanese politicians across the ideological spectrum have dismissed concerns regarding debt, saying that the debt is all in yen, none of it foreign, and inflation and interest rates are both currently close to zero.

The government now pays 0.1 percent on its 10-year bonds.

“This is not the best designed nor best timed package that the Japanese government could be doing,” Adam Posner, president of the Peterson Institute for International Economics, said to the FT.

“It is not clear that speeding up the recovery through temporary fiscal stimulus should be a priority,” he added.

Also, the new round of checks is not popular with the public, according to a recent poll, which found that a majority of Japanese fail to see the need for the government to support families with children.

Prime minister Fumio Kishida sought to temper the criticism by excluding the wealthiest households from receiving the payment. However, about 90 percent of families still will get a check.

“Having a child or not is not an effective measure to gauge which households have been hit by the coronavirus,” Morishige said.

TREND FORECAST: As we have continually noted in the Trends Journal, Japan’s decade + long monetary methadone stimulus, as with other nations, has artificially pumped up equity markets and economies.

Therefore, as evidenced with Japan, deep in debt with a 256 percent debt-to-GDP ratio—the new rounds of stimulus will sink the nation deeper in debt. At best, the policy of promoting fiscal stimulus will only temporarily boost the nations’ economic growth and will prove to be a costly failure.

TREND FORECAST: Japan’s export economy is being eclipsed by China’s, Japan’s population is among the world’s oldest, requiring more and more social and medical services, and its debt is approaching the level of the sums owed by developing nations.

Japan’s economic recovery will continue to limp far into next year. As a result, foreign investment will look for more profitable venues, further delaying any improvement.

In the near future, Japan risks a loss of economic productivity and will fall from its #3 ranking among the world’s leading economies.