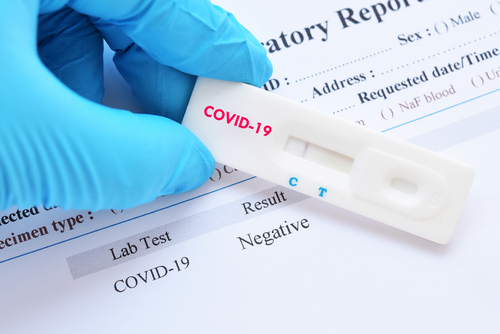 An article published online on 31 December by GlobalResearch reveals that, after two years, the U.S. CDC (Centers for Disease Control and Prevention) has accepted a conclusion that Trends Journal has been reporting on for over two years.

That conclusion is that the PCR (polymerase chain reaction) test, considered the "gold standard" of tests for COVID-19, is intrinsically flawed, yielding an inordinate number of false positive results, and therefore the numbers of COVID cases in America have been grossly overinflated; see, for example:

Even the World Health Organization caught on, about a year ago; see "WHO ADMITS: COVID TESTS FLAWED" (26 Jan 2021)

So, having finally concluded—and admitted!—that the PCR test is not to be relied on, the CDC's official policy is now that, as of 31 December 2021, it is withdrawing the PCR test and is recommending that laboratories should select another testing method and begin transitioning to it.

The article also posits that the CDC has waited until now to scuttle the PCR test because those false positives were useful in driving up the number of "confirmed COVID-19 cases," and in characterizing as "confirmed Omicron variant cases" what were actually cases of the common cold, which is of course more common in winter, and which is triggered by a Coronavirus, and which the PCR test fails to distinguish.

So, "this upward movement of PCR positive cases is now being used by corrupt politicians to sustain the Omicron fear campaign as well as impose the 'The Covid-19 Christmas and New Year Lockdown'."

TRENDPOST: The GlobalResearch article was written by Prof. Michel Chossudovsky, who has, since the beginning of what he calls "the alleged pandemic," claimed that the COVID War has provided "a pretext and a justification to powerful financial interests and corrupt politicians to precipitate the entire World into a spiral of mass unemployment, bankruptcy, extreme poverty and despair"; see "PANDEMIC 'CASES' SHMANDEMIC; IT'S ALL CRAPOLA" (15 Jun 2021).

TREND UPDATE: An article appearing in the New York Times on 6 January reports on a preliminary study of the two "rapid" COVID tests that are being distributed and administered as alternatives to the PCR test—the Abbott BinaxNOW and the Quidel QuickVue, both of them antigen tests that use a sample from a nasal swab instead of the saliva sample used for the PCR test. Both tests can be administered at home and yield results within minutes.

And the findings of that study appear to indicate that those two tests are less reliable in detecting Omicron infections. Persons known to be infected with Omicron—and with a significant viral load—still tested negative with the new tests for several days, during which time they were presumably capable of spreading the virus.

So, essentially, both at-home tests may be prone to delivering false negative results. It's not clear why this is so. There are elements in the structure of the Omicron variant's surface proteins—which antigen-based tests focus on—that may require a more sensitive test to detect. Or it may be because the Omicron variant's viral load peaks more rapidly in the mouth and throat than it does in the nose. That latter suggestion is said to be supported by findings in South Africa, where the Omicron variant first appeared and was identified.

So, while the tests are still being distributed, and evaluation continues, users are warned that a negative result "is not a ticket that allows you to go back to normal."

TRENDPOST: As the late Gilda Radner's "Roseanne Roseannadanna" would say, "It's always somethin'