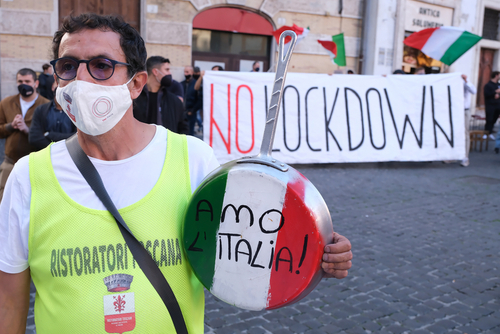 Governments that cannot convince citizens to take the COVID-19 vaccine have resorted to the tried-and-true method of essentially threatening their populace with starvation for compliance.

What better way to "convince" someone a vaccine is safe than by threatening their livelihood?

The plan was embraced by Rome because it dances around potential legal headaches if workers were given an ultimatum. These workers must present a "green pass" to see their green. (See “UPDATE: EURO DIGITAL GREEN PASS” GAINING SPEED,” and “ITALY: NO GREEN PASS, NO FREEDOM.”)

“It’s an extraordinary endeavor,” he said. “It’s all the human capital in the country.”

Francesco Borgonovo, the deputy editor of the daily La Verita, told NPR that the "green pass" is “political, not a health measure.”

“No one up to now has proven to me that this political measure protects us against the virus,” she said.

Draghi has been one of the most outspoken proponents of the vaccines and has said they are the only way the country will ever return to normal.

We pointed out in August that Draghi condemned those who refused to take the shot, and said, “If you don’t vaccinate, you get sick, you die or you let other people die.”

The Italian order even forces those who have had and recovered from COVID-19 to get vaccinated. NPR called Rome’s mandate “one of the strictest in the world.” To date, some 70 percent of the Italian citizens have been fully vaccinated.

TRENDPOST: As we have reported in previous issues, Mario Draghi was born into the upper class with long Bankster credentials—Bank of Italy, World Bank, Goldman Sachs, European Central Bank…so, like most bankers, he works best when the system is rigged in his favor.

TREND FORECAST: Politicians have failed at selling COVID-19 vaccines to a strong minority of the public despite corporate media's attempt to do their best selling the vax, social media companies silencing debate against the jab, and the joined effort to portray anyone who even questions the vaccine as a stupid, ignorant, insane heretic that should be condemned.

Yet, there will be strong resistance among many to get the jab.

For example, the vaccine was first promoted as being 96 percent effective, which led much of the public to believe they were bulletproof. But following the Israeli Health Ministry analysis that the jab had a 39 percent efficacy rate, politicians and “health officials” walked back, admitting you can still get the virus after being fully vaxxed.

However, the line being sold was that those who got the shot and still got the virus would fare better than the unvaccinated that got the virus. And when Delta emerged and news that vaccines appear to wear off in under a year, now it’s a third jab—for old time’s sake.

Thus, while there will be growing mandates and animosity from public officials against those who will not get vaccinated, and losses of “freedom,” we maintain our forecast that not only will vax resistance intensify, it will lead to great divisions across all sectors of society.