ITALY: NO BOOSTER, NO FREEDOM FOR HALF THE POPULATION 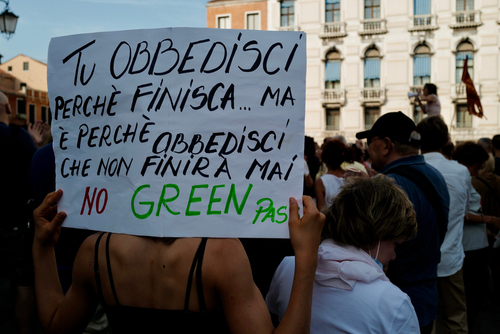 Of Italy’s population of some 60 million people, some 28 million are 50 years of age or older.

Roberto Speranza, the Italian health minister—a 43 year old little jerk-off that’s been sucking off the public tit since he was a 25 year old kid—announced that all citizens over 50 will be required to get a booster shot so they can produce a “super green pass” at their places of work or face a fine after 1 February.

“We are choosing to restrict as much as possible the group of the unvaccinated because they are the ones who weigh on our health system,” Speanza said.

The latest decree in Italy calls for a €1,500 fine for unvaccinated workers over 50, and—to compound the pain—these workers will also be suspended without pay, The Wall Street Journal reported.

TREND FORECAST: The Trends Journal has reported extensively on how governments across the world are cracking down on freedoms in order to get people to take the COVID-19 vaccine. (See “AUSTRIA: ‘NO VAX, NO FREEDOM,’” “THE CHINESE WAY: MANDATORY VAXXING” and “COVID WAR CRACKDOWNS AND PROTESTS.”

As winter sets in, economic conditions will sharply deteriorate, and anti-lockdown protests will escalate. As we have forecast, new anti-tax, anti-vax, anti-lockdown, anti-establishment political parties and social movements will accelerate.

Another is the fact that the disease with a 99.7 percent recovery rate is entirely survivable by most of the people it infects. And, those who die from the virus, as detailed, some 94 percent are suffering from pre-existing comorbidities and/or the elderly, who are suffering from illnesses.