ITALIANS TAKE TO THE STREETS TO RAIL AGAINST WORKPLACE ‘GREEN PASS’ 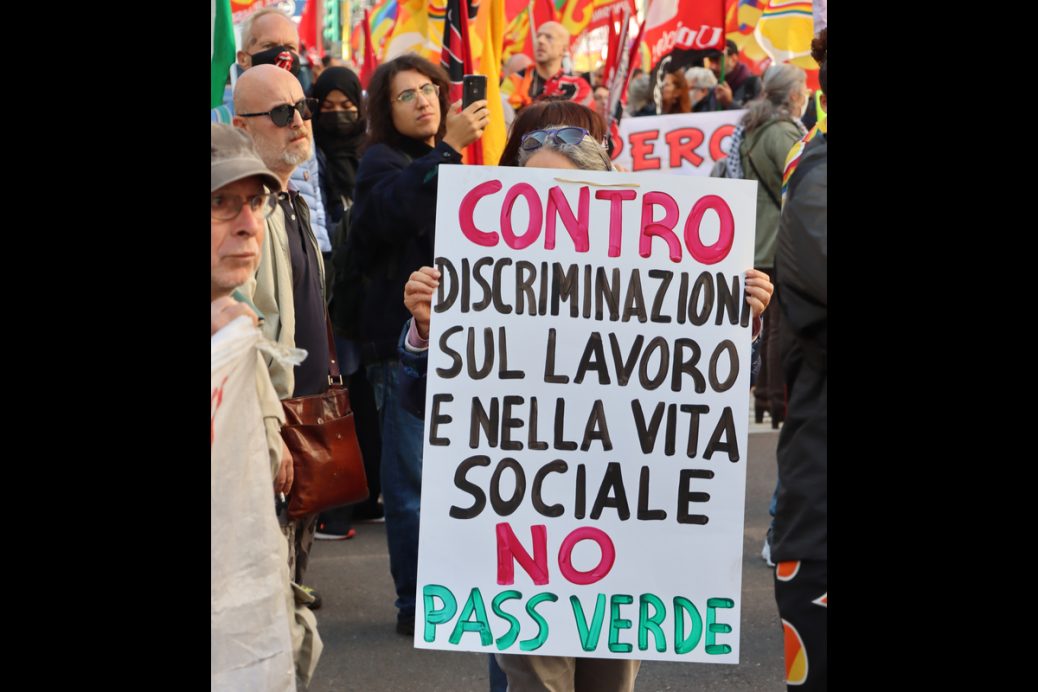 Italy, the first western nation to launch the COVID War in 2020 and the first to impose draconian lockdown mandates on its population, is once again leading the way when it comes to stripping freedoms from its people with its “No Jab, No Job” Green Passport declaration.

Prime Minister Mario Draghi has declared that he knows that the only way to stop the coronavirus is for total compliance among all Italians to get injected with the Operation Warp Speed gene therapy shot. The ruler of Italy said he will take jobs away from all those unwilling to get the vaccination.

Resistance in Italy is building.

The country saw new protests break out Friday after Rome started to implement its new Green Pass rule for employees and employers.

The Green Pass (first issued by Israel last year and now the global symbol of vaccine repression) is already required throughout Italy, but 15 October marked the start of employers enforcing the rule.

Any worker who does not have one of these passes will be suspended without pay, according to Reuters, but they are not allowed to be fired.

These passes prove that employees are either fully vaccinated or have tested negative within the last 48 hours. If workers do not comply, they face fines of about $1,750.

The Financial Times reported that Draghi’s government believes the enforcement will get the nearly 4 million unvaccinated Italians to take the shot. (See “UPDATE: EURO DIGITAL GREEN PASS” GAINING SPEED,” and “ITALY: NO GREEN PASS, NO FREEDOM.”)

“I didn't get the vaccine because I don't trust all this chaos and miscommunication that has been going on from the start of the pandemic until now,” Joachim Oberrauch, a 51-year-old high school teacher, said, according to the FT. “I Don't trust ‘big pharma,’ and as of today the news about vaccines has been quite contradictory and confusing, so I decided to postpone it or wait for another vaccine to become available that I'm not afraid of.”

Fabio Bocin, a 59-year-old port worker in Trieste, told CNN, “The Green Pass is a bad thing, it is discrimination under the law.”

“Nothing more. It's not a health regulation, it's just a political move to create division among people,” he said.

Italy is—once again—considered a trailblazer in COVID-19 enforcement with the implementation of the Green Pass at work.

The New York Times wrote that Italy is the first democracy “willing to use the full leverage of the state to try to curb the pandemic and get the economy moving.”

About 10,000 opponents took to the streets two weeks ago that led to a group of protesters breaking into the headquarters of CGIL, the union that supports the vax passports.

Another group—supporters of Forza Nuova, which has been described as a “fringe neo-fascist party”—attempted to break into Draghi’s official residence in Rome. The Times wrote these groups have forced Italy to “once again reckon with its fascist legacy.”

These protesters say their freedoms are at stake.

“Having to pay to go to work, under the threat of blackmail for your salary, cannot be a tool to contain the pandemic, the Siam air force trade union said in a statement, according to the FT.

TREND FORECAST: As we continue to note, there will be growing anti-vax, anti-establishment, anti-immigration, anti-Eurozone movements spreading throughout Europe. This trend will greatly accelerate as economies decline, civil unrest grows and the refugee crisis worsens.

TRENDPOST: While the protesters in Italy were recently denounced as “Fascists,” Mario Draghi, the Prime Minister of Italy, by his deeds and who he is, is Fascism personified... since according to Benito Mussolini fascism is “the merger of state and corporate power.”

How can anyone be so ignorant and blind not to see the reality of a Fascist who, as the leader of European Central Banks, Draghi lowered interest rates to below zero so the “Bigs” can borrow money for nothing and grow bigger while the Peasants of Slavelandia get no interest on their bank deposits?

Yes, Fascist Draghi who, as head of the ECB stole trillions of dollars from the people to enrich the “Bigs” with his quantitative easing plans that buy up corporate debt... indeed, “the merger of state and corporate power.”

Mario Draghi, former Director General of the Italian Treasury, Governor of the Bank of Italy, World Bank bandit, head of the Goldman Sachs European division... a money Junkie supreme who’s merged state and corporate Fascist powers said regarding those refusing to take an Operation Warp Speed gene therapy vaccine—the first ever to be injected into human beings—“The right to demonstrate one's ideas can never denigrate into acts of aggression and intimidation.”

Yet, totally ignored by the media who bow down to him, clearly, Draghi’s vax mandates, among the toughest in the world, are prime examples of human denigration, acts of aggression and FASCIST intimidation... as reinforced and exemplified by the Italian Nazi Goon Squad Polizia.