IS BLINKEN AFRAID? HE WON’T MEET WITH RUSSIAN COUNTERPART 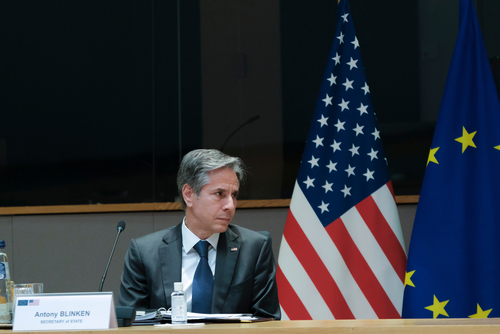 U.S. Secretary of State Antony Blinken on Friday refused to meet with Russia's top diplomat, Sergei Lavrov, in Bali during the Group of Twenty meeting.

Ned Price, a spokesman for the State Department, told reporters that “the time is not right” for foreign engagement with Lavrov.

As tensions were heating up back in February between Russia and Ukraine, Blinken called off his last scheduled meeting with Lavrov two days before Russia launched the invasion. The top U.S. diplomat addressed Russia through the media, and said Ukraine "is not your country.”

Lavrov blamed “blatant Russophobia” for much of the world’s maladies, The New York Times reported. He said the U.S. is continuing to put its animosity toward Russia above all else.

Lavrov said it is not Russia’s choice “to abandon all contacts, it was the United States.”

“And we are not running after anybody suggesting meetings. If they don't want to talk, it's their choice,” he said.

The paper reported that the foreign minister from Indonesia, Retno Marsudi, “departed from Western rhetoric” during the conference and said there should be a common goal to end the war “sooner than later.”

Lavrov's decision to participate in the event was seen as a replay of Russian President Vladimir Putin's decision to attend the 2014 G20 meeting in Brisbane, Australia, shortly after a Malaysia Airlines plane was shot down over an area of Ukraine controlled by Russian-backed separatists. Russia was also criticized for allegedly providing weapons to separatists in Ukraine at the time.

Blinken also met with his Chinese counterpart on Saturday at the summit and he said the two shared a candid conversation for more than five hours. He told reporters that the conversation focused on Beijing’s alignment with Russia. He said neither country held back.

“We were very open about where our differences are ... but the meeting was also constructive because despite the candor, the tone was very professional,” one U.S. official told CNN.

“I would start with the proposition that it’s pretty hard to be neutral when it comes to this aggression,” Blinken said. “There’s a clear aggressor. There’s a clear victim.”

The state department said at the beginning of the conflict that the U.S. will “not allow any country to compensate Russia for its losses” from Western sanctions. Chinese Foreign Minister Wang Yi said at the time that Beijing stands on the right side of history over the Ukraine crisis and “will never accept any external coercion or pressure, and opposes any unfounded accusations and suspicions against China."

Blinken reiterated to reporters that his decision not to engage Lavrov at the G20 meeting was based on Washington seeing no evidence that Russia, “at this moment in time, is prepared to engage in meaningful diplomacy.”

TRENDPOST: The Chinese newspapers the Global Times and the People's Daily, wrote at the onset of the war that NATO's eastward expansion is "the root cause of Russia's anger and military operation in Ukraine."

"It's the US that should put out the fire it lit in Ukraine. Ridiculously, it is demanding Beijing to do this job at the cost of damaging China-Russia relations. This is unreasonable and insidious. By pushing China to denounce Russia and asking China to bear the responsibility for the fatal strategic mistake the US and NATO made in the construction of so-called European security, Washington has no intention of hiding its desire to sow discord between China and Russia," the paper wrote.

The Trends Journal has reported extensively on how the U.S. military, the largest in the world, has not won a war since World War II and cannot even win against third-world nations, such as Afghanistan.