INVEST IN CHINA DESPITE EVERGRANDE RECKONING? 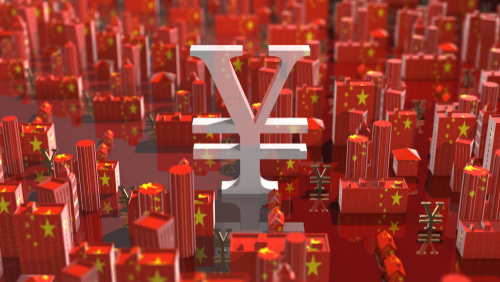 Wall Street firms have brushed aside concerns about recent upheaval in China—including the crackdown on businesses by the Chinese Communist Party—and see the country as a good bet.

The New York Times reported that BlackRock, the largest asset manager on the planet, recommended that investors increase their exposure to China while bankers from J.P. Morgan and Goldman Sachs also see China as a viable investment. BlackRock called China an “undiscovered” market.

Not everyone agrees with the strategy, including billionaire investor George Soros, who called the investment a “tragic mistake” that hurts U.S. national security.

The paper said it viewed a July memo from China’s deputy chairman of its securities regulator, calling on top officials from BlackRock and other asset managers to assuage their concerns about a selloff in the country. Shortly after that meeting, BlackRock offered glowing praise for Beijing.

China, with its 1.4 billion population and between 400 and 500 million people considered middle class, is an attractive market to most businesses. But despite the size of the market, the country poses some challenges, including intellectual property concerns and trade, the report said. President Xi Jinping’s tighter control on businesses is also a source of concern among investors.

But The Times’ report said that Wall Street companies see China as “too big to ignore and that its stocks are too undervalued to pass up.”

Morningstar reported that U.S. mutual funds have also seemed to take note and increased their exposure to China by 43 percent from last year.

CNBC reported that the MSCI China Index is down about 20 percent in 2021 compared the S&P 500 Index up nearly 16 percent.

“China has gone on sale,” Mary Erdoes, the CEO of J.P. Morgan Asset & Wealth Management, said at a CNBC conference.

She continued, “All of the hand wringing the world has about words coming out of China is the same thing you hear out of the U.S. government so I am not sure why it causes so much consternation.”

She was referring to Beijing’s so-called “common prosperity” plan.

The CNBC report pointed to an interview in late June with Charlie Munger, the Berkshire Hathaway billionaire who praised China’s attempt to rein in market excess.

“And our own wonderful free enterprise economy is letting all these crazy people go to this gross excess. People who are avoiding it are the communist Chinese. They step in preemptively to stop speculation…Communists did the right thing…And I wish we had…I don't want all of the Chinese system, but I certainly would like to have the financial part of it in my own country.”

TREND FORECAST: While the Chinese government is doing what they can to prevent a sharp economic decline, as we have been reporting, the nation has been in a decade’s long real estate market bubble.

According to Kenneth Rogoffa and Yuanchen Yang research analysis, the real estate sector and construction industries account for nearly 30 percent of China’s economic activity... a rate far beyond other nation’s economies.

And, as reported by The Wall Street Journal, China’s property market faces a day of reckoning because real estate developers have taken on more than $5 trillion in debt... and two fifths of the developers have borrowed from international bond investors.

However, we maintain our forecast that minus a dramatic global equity market crash, considering the measures Beijing is taking too slowly deflate the real estate bubble, while housing prices will pull back, they will not bust.

And, we also maintain our forecast that China will be the dominant military and economic power of the 21st century.