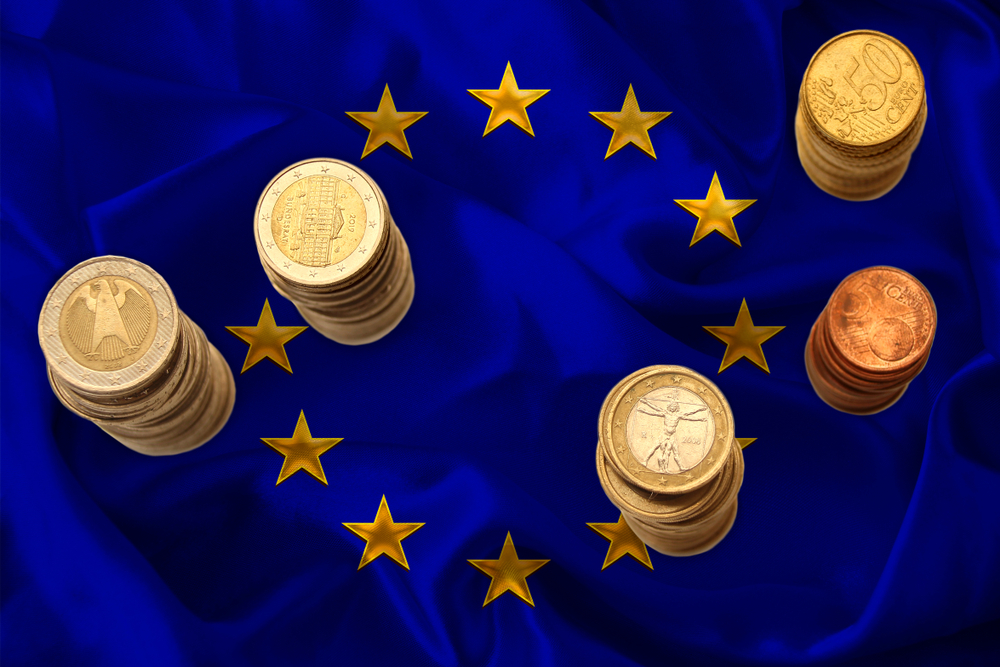 Reversing five months of sinking prices, inflation shot from -0.3 percent in December to 0.9 percent in January, according to Eurostat, the European Union’s statistics agency.

Reuters had foreseen only a 0.5-percent hike.

Taking food and energy prices out of the calculation, prices gained even more, rising from -0.2 percent in December to 1.4 percent last month.

In Germany, inflation surged from -0.7 percent in December to 1.6 percent in January.

The European Central Bank has decided an inflation rate of up to 2 percent is acceptable and would not require the bank to raise interest rates or adjust policies.

The rise was due not to spiking demand among consumers or export customers, but a confluence of singular events. Those included the end of a temporary reduction in Germany's value-added tax and a shortage of shipping containers, temporarily raising logistics costs for manufacturers and retailers.

Also, the method of calculating inflation was changed to give greater weight to items in greater demand, which yields a higher inflation rate.

Also, January brought a spurt of seasonal clothing and footwear sales by consumers who had postponed purchases during economic lockdowns in late 2020.

The price rise is a blip, not a trend, analysts say.

“We expect inflation to drop back again,” Andrew Kennigham, Capital Economics’ chief economist for Europe, said to the Financial Times. “The impact of the pandemic recession will ultimately be disinflationary.”

Morgan Stanley’s analysts “continue to see weak underlying price pressures and only a gradual pick-up in core inflation,” they wrote in a research note, adding that they expect Europe’s central bank to “talk down” the rise.

"In a year's time, core inflation will be stuck around 1 percent," Richard Barwell, chief of Macro Research at BNP Paribas Asset Management, commented to the Times. "We had a big fall in unemployment in the Eurozone in recent years and that didn't lift inflation to the [central bank's] target, so I'm not convinced Europe will escape its low-inflation trap so easily."

TREND FORECAST: As noted in our article in this issue, “FOOD PRICES CLIMB TO SEVEN-YEAR HIGH,” we maintain our forecast for Dragflation. Governments will flood failing economics with cheap money to artificially prop them up. The more cheap money they inject, the lower the value of the currency and the more it costs to purchase goods and services.

TRENDPOST: Other factors pushing up inflation are results of the lockdown that have slowed production and/or increased demand for various commodities.

Ford, General Motors, Toyota, Volkswagen, and other carmakers are scheduling idle time at North American plants due to a shortage of the computer chips that populate today's vehicles.

General Motors will halt production at three plants in Canada, Mexico, and Kansas this week and will reduce production at a South Korea plant by half, the company announced.

The chips are in short supply because manufacturers shifted their production to chips for consumer electronics as auto plants shut down during the economic freeze last spring and demand for computers and other electronic appliances soared.