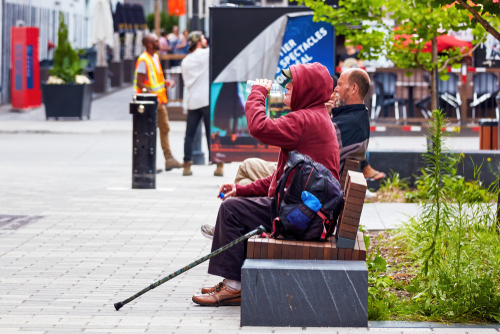 Remember for over the past year that the “experts” were forecasting that inflation was “temporary”?

Then when they could no longer deny it, they said it was “transitory.”

And now, with no end in sight, from the Banksters to the business “experts,” they now forecast that inflation will be around for at least several months if not longer.

Meanwhile, as inflation spikes, while wages are also going up, as we have detailed, they are far behind the rate of inflation in a country near you.

Nearly half of Canadian households said in a recent survey that they have had some difficulty paying their grocery bills during the COVID-19 outbreak, which will likely be compounded by the fact that there has been an inflation increase of 4.4 percent in September, which marks an 18-year high.

The Angus Reid Institute poll was released just as the inflation figures were made public, Bloomberg reported. Households surveyed were asked if their income increased enough to not feel the pinch, but 37 percent said “not enough,” and 42 percent said “not even close.”

Statistics Canada reported that gasoline was the biggest inflation driver last month, with prices at the pump up by 32.8 percent compared with September 2020, the BBC reported. The report said food prices rose by 3.9 percent.

About 40 percent of U.S. households have also experienced serious financial problems over the past few months.

September marked the sixth-straight month that inflation exceeded the Bank of Canada’s target of up to 3 percent, MacLean’s reported. Despite the bank’s position that inflation is transitory, Tiff Macklem, a bank governor, told the news outlet that inflation in Canada could be “a little more persistent” due to supply congestion.

TREND FORECAST: Our “OFF WITH THEIR HEADS 2.0” trend from December 2019, forecasting the global rise in anger directed at the 1 percent, was already spreading globally prior the 2020 COVID War.

The great wealth gap followed by the destruction of small businesses by politicians who launched the COVID War while allowing the Bigs to get bigger will be a key platform in the formation of new political parties across the globe. As the gap between the rich and poor widens, so, too, will the animosity between the “haves” and “have nots.”

Gated communities will increase in popularity and more private security will be hired by the haves who will be gangland targets.