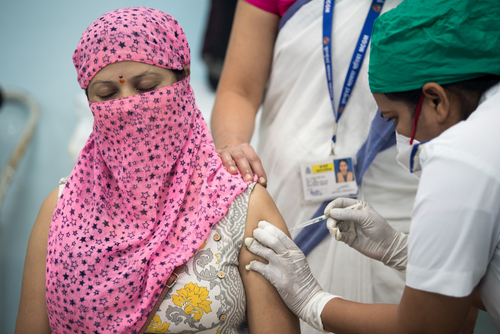 India’s Supreme Court last Monday ruled that no individual can be forced to take the COVID-19 vaccine due to the integrity of bodily and personal autonomy.

Justices L Nageswara Rao wrote the ruling for the court that bodily integrity is “protected under Article 21 of the Constitution and no individual can be forced to be vaccinated,” Indian Express reported.

“Further, personal autonomy of an individual, which is a recognized facet of the protections guaranteed under Article 21, encompasses the right to refuse to undergo any medical treatment in the sphere of individual health,” he wrote.

"Barring Covid-appropriate behavior, we suggest no curbs on unvaccinated individuals in access to public places, services and resources if cases are low," the Supreme Court said.

The court heard the case after a petition was filed by Dr. Jacob Puliyel, a former member of the National Technical Advisory Group on Immunization, who sought a stay on vaccine mandates, the paper said.

Puliyel also raised concerns about of non-disclosure of vaccine trial data, improper collection and reporting of Adverse Events Following Immunization (AEFIs) and vaccination of children, according to Jurist.org.

The court called on health officials to make more information about the vaccines and their benefits easily available.

The court ruled that the government is entitled to regulate issues of public health concern by imposing certain limitations on individual rights for the “larger public interest.”

Masking in public, for example, continues to be enforced in India.

Adar Poonwalla's Serum Institute of India and Bharat Biotech, two vaccine makers in India, argued that all trial data was already in the public domain.

TRENDPOST: In January, the U.S. Supreme Court dealt a half-blow to the Biden administration when it blocked the enforcement of a vaccine-or-testing mandate for businesses with 100 or more employees.

Again, this was not “science,” but pure political science since a political moron or idiotic bureaucrat came up with the number 100. Why wasn’t it a business with 85 employees or 122 employees?

The court’s majority, which voted 6-3 in favor, wrote that the Biden administration’s vaccine-or-test requirements for these businesses were no “everyday exercise of federal power.”

The majority wrote that OSHA does not have a mandate from Congress to “regulate public health” for 84 million Americans “simply because they work for employers with more than 100 employees.”

“It is instead a significant encroachment into the lives—and health—of vast number [sic] of employees. We can’t expect Congress to speak clearly when authorizing an agency to exercise powers of vast economic and political significance. There can be little doubt that OSHA's mandate qualifies as an exercise of such authority.”

However, the court also ruled in a 5-4 decision to allow medical facilities that accept Medicare and Medicaid dollars to enforce a vaccine mandate for employees.

TRENDPOST: Biden is seen as going further than any past American president to force vaccinations and he is basing his effort on protecting “vaccinated workers from the unvaccinated,” which naturally raises the question of the vaccines’ effectiveness.

And as we are now witnessing, those who are fully vaxxed and boosted are getting the virus and spreading it.. And, according to the Washington Post analysis of data from the Centers for Disease Control and Prevention, “The vaccinated made up 42 percent of fatalities in January and February.” Again, totally absent from the mainstream narrative, is that the public was sold the lie by the drug lords back in November of 2020, that if one gets the COVID Jabs, the odds are 96 percent in their favor never to get the virus.

But of course, that is not true, since the efficacy rate, according to the Israeli Health Ministry, is 39 percent. See “THE DARK SIDES OF THE VAX,” 24 Aug 2021.

And, now it’s a two shot and booster shot... plus a COVID Jab every year, like the flu shot, is now being sold to the general public.