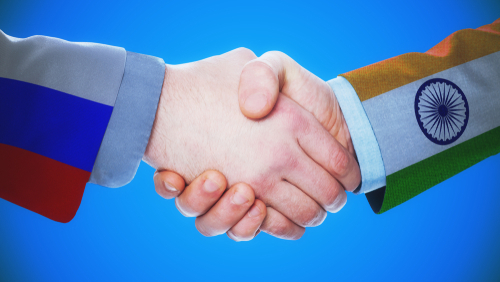 The two countries are talking about raising their two-way commerce from its $8 billion value in the 2021 financial year to $30 billion before 2025.

India buys fertilizer, fuel, and gems from Russia and runs a trade deficit with its partner to the north; India’s chief export to Russia is pharmaceuticals.

India, with 1.4 billion people, is the world’s third largest energy consumer. Now it  is grabbing shipments of Russian crude oil that most of the rest of the world refuses to touch because of Western sanctions, the Financial Times discovered.

That volume will average 203,000 for this month, based on scheduled shipments, data service Kpler reported.

India is buying a grade of Russian oil now selling as much as $30 below average world prices.

Historically, only about 5 percent of the 4.2 million barrels of oil India burns annually has come from Russia, due in part to high shipping costs.

India now seems to be taking Russian crude that already was loaded but that was unable to find a home after sanctions fell into place.

The shipments might continue: several oil producers and traders are contractually obligated to keep pumping and buying Russian oil, the FT noted.

“All three state-owned refineries [in India] will purchase oil from Russia, given how import-dependent and politically sensitive energy is for Indians,” analyst Vivekinand Subbaraman at Ambit Capital told the FT.

Energy prices in India have risen only 5 percent since the Ukraine war began, according to oil minister Hardeep Singh Puri, far less than in Europe and the U.S.

India and Russia are now building on that foundation to explore a “ruble-rupee” exchange.

It would allow the two countries to trade with each other in their native currencies.

Now, to pay for imports either country would have to convert its own currency into dollars, euros, or some other “hard” currency that can be readily traded around the world.

The country would pay its bill in, say, dollars, then the country receiving the payment would convert the dollars back into its own currency.

The India-Russia agreement would eliminate those middle steps.

“I can give rubles to Sberbank”—a large, Kremlin-controlled Russian bank—“and they can give me rupees in India,” Sammy Kotwani, president of the Indian Business Alliance in Russia, explained to the FT, characterizing the arrangement.

“We have requested the government to have this arrangement,” A. Sakthivel, president of the Federation of Indian Export Organizations, told the FT. “I think we will get it very soon.”

The countries intend to continue the pact even when sanctions on Russian exports end, the FT reported.

In forging a stronger Russian alliance, India risks displeasure from the U.S., its largest export market, currently worth about $50 billion annually.

“If I were the U.S., I would be very mad if they did this because I don’t want India to undermine the power of the U.S. dollar,” Sakthivel noted.

For India, trying to strike a balance between the two relationships “is like walking on needles,” he added.

Not everyone in India’s business and financial sectors are eager for the agreement, the FT found.

The ruble’s value has crashed and the rupee’s value against the dollar has been sliding since 2018.

Russia is India’s chief supplier of military hardware. India has remained neutral in the diplomatic conflict between Russia and the Western alliance and has abstained from UN votes to condemn Russia’s invasion of Ukraine.

TREND FORECAST: The negotiations between Russia and India highlight a weakness in the West’s sanctions against Russia: there are countries that are either non-aligned or friendly with Russia and China that are willing to ignore the sanctions to strengthen their trade relationships with either or both giant nations.