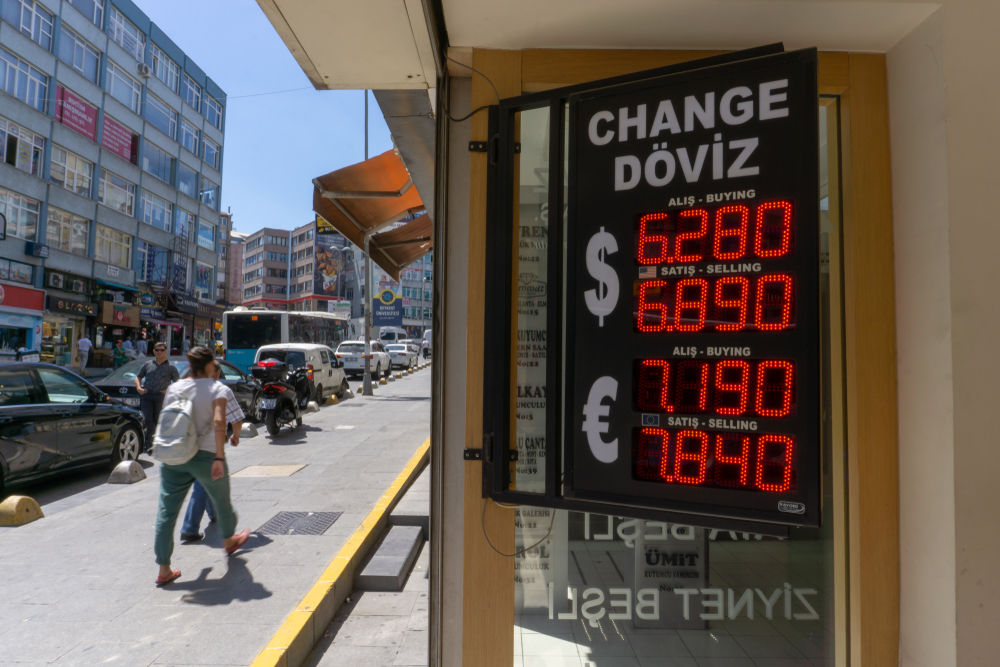 If the U.S. Federal Reserve begins to raise interest rates, the resulting shock wave could rattle markets for Turkey’s currency, the lira.

The lira’s value has been sliding for months as the country’s central bank, pressured by president Recep Erdogan, kept interest rates lower than the rate of inflation.

Naci Agbal, whom Erdogan appointed to head the country’s central bank in November, raised rates to 19 percent, above inflation’s 15-percent pace, to rein in price growth.

Erdogan, who favors low interest rates to spur economic recovery, fired Agal after giving him only four months in office, and replaced him with an Erdogan loyalist.

After Agbal’s ouster, foreign investors pulled $1.9 billion out of Turkey’s economy; so far, only about $30 million has returned, according to the Wall Street Journal. (See “Turkey’s Financial Markets Crash After Agbal Firing,” Trends Journal, 30 March, 2021.)

The lira fell to a record low above 8.75 to the dollar after Erdogan called for the central bank to cut interest rates again in July or August.

Investors fear the bank will bow to Erdogan’s demand, which would weaken the lira further against the dollar.

If the Fed raises U.S. interest rates, the dollar will strengthen. That would weaken the lira even more and make it more difficult for Turkey to pay its dollar-denominated foreign debt.

And as we have detailed in this and previous Trends Journals, the Fed signaled on 16 June that it now expects to raise its benchmark interest rate in late 2023, not 2024 as it said in March.

A growing global economy typically benefits emerging economies such as Turkey’s; however, if the central bank is unwilling to raise interest rates, inflation is likely to run rampant, crippling the country’s economy during a time of opportunity.

“It will be harder for Turkey to stay competitive for capital flows,” economist Erik Meyersson at the Swedish Handelsbanken, told the WSJ.

“Positive news for the global economy in terms of higher interest rates is not good for Turkey,” he said.

Central bank governor Sahap Kapcioglu has pledged to keep interest rates above the pace of inflation, which stood at 16.59 percent last month. His promise places him in direct conflict with the wishes of the president who appointed him.

Turkey also depends on tourists for foreign currency, a revenue source that disappeared during almost all of 2020.

“Tourist season in Turkey is still very much at risk,” Meyersson said.

“They’re doing what they can and trying to get tourism workers vaccinated and create as hospitable an environment as possible, but it’s going to be hard,” he warned.

TREND FORECAST: Erdogan is unlikely to abandon his cherished notion that low interest rates fight inflation until Turkey’s economy collapses under the pressure of runaway prices. At that point, Erdogan or his successor will be forced to accept terms offered by rescue agencies such as the World Bank or International Monetary Fund.