HONG KONG UNDER PRESSURE FROM CHINA TO WIN THE COVID WAR 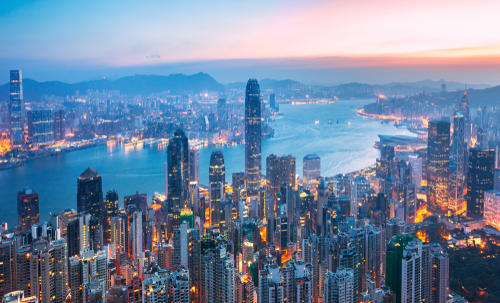 Chinese President Xi Jinping has been one of the world's last remaining holdouts to enforce a "zero COVID" policy, which means any small outbreak results in an immediate lockdown until any risk of further contamination is snuffed out.

Xi, who oversees a massive country with 1.4 billion people, has reported a relatively small number of cases and deaths due to these policies. There have been a total of about 130,000 reported cases and about 5,000 deaths.

But Xi may be facing his toughest challenge yet amid an Omicron outbreak in Hong Kong, the semiautonomous Chinese city and global financial hub. Hong Kong has had 21 deaths over the past week alone and Xi has already told the city to make "controlling the epidemic as soon as possible an overwhelming priority."

His fear is that the virus could easily jump to the mainland and spread like wildfire. China is, of course, notorious for implementing a heavy-handed approach to stopping the spread of the virus. Residents in Xi’an were locked down for a month during a recent outbreak.

The Omicron variant has been blamed for the jump in cases. The city recorded 6,116 new cases on Wednesday.

The New York Times reported that hospitals in Hong Kong are overwhelmed and patients are left waiting on sidewalks. All positive cases are forced to check in to hospitals and quarantine centers, even if they only have mild symptoms.

“The reality is that there are very few severe cases,” Jin Dong-yan, an epidemiologist at the University of Hong Kong, told the Financial Times. “Logically, it shouldn't cause a big run on our medical facilities, but [it does] if you take in all patients. Hospitals should primarily admit the elderly, pregnant women, and children.”

The paper reported that Beijing will not allow Hong Kong to live with the virus.

Carrie Lam, the city’s leader, has described the approach to “dynamic zero,” which she called a “policy requirement from the mainland.”

“But I am not the initiator, so if you want an authoritative definition of ‘dynamic,’ I’m sorry, I really can’t explain it,” she said.

The concern for China is that if Hong Kong loosens restrictions and takes the position that it will live with the virus, it raises the possibility of a massive outbreak on the mainland.

Regina Ip, a pro-Beijing lawmaker, told the FT that there is little chance that Beijing will abandon its “zero-COVID” policy for Hong Kong.

Jin, the epidemiologist, told the paper that it would be impossible to close Hong Kong.

TRENDPOST: Hong Kong, a city of 7.4 million that is being forced by China to fight the COVID War, has had just 276 COVID deaths since the beginning of the outbreak two years ago. To put the number into perspective, New York City, which has a million more residents, absorbed nearly 67,000 deaths.

Known as “Asia’s World City” Hong Kong is dead town as a result of the series of draconian COVID lockdown rules that have closed down restaurants, nightlife and business... cutting itself off from the outside world with its travel restrictions and mandates.

Indeed, Fitch ratings agency warned that the foreign travel restriction would severely threaten Hong Kong’s economic future. And according to the South China Morning Post, twenty banks temporarily closed another 135 branches over the last seven days, bringing the total closures to 412 city-wide as of Saturday, based on a Post analysis of announcements by banks. This represents 37 per cent of the 1,100 local branches versus 25 per cent a week earlier.